What Is the Origin of the Pound Sterling Sign? 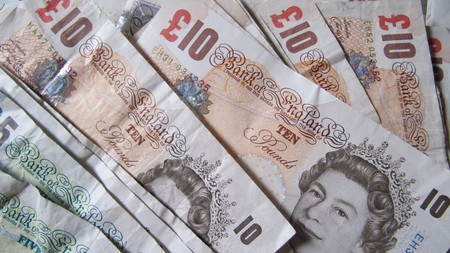 Of all the currencies currently in use around the world, the pound sterling is the oldest. But what is the origin of the iconic pound sterling symbol?

Nowadays, sterling is a fairly simple currency. Banknotes come in four denominations: £5, £10, £20 and £50. Coins come in eight denominations: 1p, 2p, 5p, 10p, 20p, 50p, £1 and £2. There are 100 pennies in one pound and that’s that. But things haven’t always been this straightforward. Prior to Decimal Day – 15 February 1971 – which marked the conversion to decimalised currency in the UK, there were 240 pennies in a pound. And as if that wasn’t confusing enough, there were also 12 pence in a shilling and 20 shillings in a pound.

The system of pounds, shillings and pence, otherwise known as £sd or L.s.d. (no, they weren’t tripping – LSD didn’t come about until the mid-20th century), had its origins in ancient Rome, where there was a monetary system consisting of silver denarii and gold solidi. One gold solidus was worth 12 silver denarii, while 240 denarii were minted from one librus, or a pound weight, of silver. The Carolingian monetary reforms of Pepin the Short and his son Charlemagne in the Holy Roman Empire revived elements of this system in western Europe during the 8th century.

It was not long before the utility of such a system was recognised in the British Isles: King Offa of Mercia introduced silver pennies, or ‘sterlings’ to his kingdom and the idea soon spread across Anglo-Saxon England; like in ancient Rome, 240 pennies were minted from one pound of silver. Large payments were referred to in ‘pounds of sterlings’, which evolved over time into the phrase ‘pounds sterling’, a term still used today to refer to the United Kingdom’s currency. Shillings were incorporated into the currency during the 11th-century reign of William the Conqueror, with 20 shillings equating to one pound.

Latin was the language of law and record in Medieval England and it was the Roman words ‘libra’, ‘solidi’ and ‘denarii’ that were used to refer to the denominations of English currency – and it was these Latin words that were abbreviated to form the basis of the L.s.d. system of referencing currency in England and, later, across much of the British Empire. The pound sterling sign (£) is essentially just an elaborate ‘L’ that has a line struck through it to identify it as an abbreviation (of the Latin word ‘libra’). Italy’s pre-euro currency, the Italian lira (L), derived its name from the same origins as the pound and was also often symbolised by an ‘L’ with either one or two strikethrough lines (£ or ₤).

Despite its iconic status, the symbol with which we are familiar today took nearly 200 years to be widely adopted. The pound sterling sign features on a cheque dated 7 January 1661 in the Bank of England Museum – and the symbol was in common usage by the time the Bank of England was established in 1694 – but an ordinary letter ‘L’, in upper or lower case, was used to refer to pounds sterling in books and newspapers until the mid-19th century.

Enjoy reading this? Meet Colonel Blood, the man who stole the crown jewels, or find out how the Great Fire of London started.