Warning: These Are the World's 13 Most Dangerous Spirits 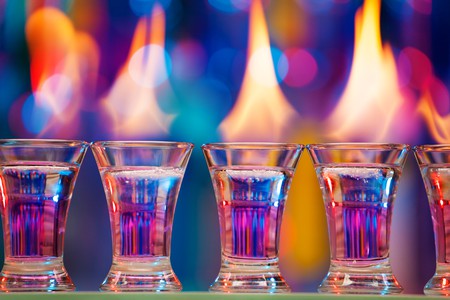 From moonshine to whisky, here are the world’s strongest spirits and cocktails.

Ok, first up, the disclaimer. We are not advocating excessive, or indeed any, consumption of these spirits. Nor do we recommend making these cocktails, because they’re all potentially lethal in excess. Indeed some of these products are banned entirely from certain US states specifically because of their nocuous potency.

So why do they exist? Well they’re mainly designed to be mixed with other non-alcoholic liquids and fruit juices yet still retain the underlying taste of the spirit, allowing the bartender or mixologist to get creative but still deliver a drink that is palatable. They are not, repeat not, to be drunk neat, got that?

Consider the following article an education on what to avoid, most of these liquids can probably be used be used to sterilise wounds or clean your drains. Here then, are the world’s strongest drinks, you have been warned.

This rectified spirit (essentially a high concentration of ethanol produced by repeated distillation) comes in at 190-proof 95% ABV and with what you might call the ‘lite’ version at 151-proof (75.5% ABV), Everclear is so strong it’s banned in Iowa, California, Florida, Maryland, Nevada and several other states. The bottle contains the warning that this should NOT be drunk neat, or indeed put near any naked flame. Instead they advise using it as mixer.

Pipping Everclear by a single percentage point however is Spirytus Rektyfikowany; made by Polmos, this Polish rectified spirit is available at an astonishing 96% ABV. It’s used as a mixer, and as a base spirit for other drinks and infusions.

The bottle Balkan 176 come in contains 13 different health warnings, including one in Braille. That’s because inside is a colourless, tasteless and practically odourless spirit at a thumping 176-proof (88% ABV). One online reviewer’s experience was ‘let’s just say I lost my keys, I was walking on the highway and I lit a cigarette and my tongue caught fire. hell of night. don’t buy unless you’re mentally a little slow.’

Using the technique of quadruple distillation, this Islay whisky has an ABV of 92% and is officially the strongest single malt ever made. It’s so strong in fact, that TV presenter James May powered a sports car with it.

Absinthe, already a fairly strong drink it has to be said, gets even stronger in the Hapsburg X.C range. It also comes in a variety of lurid colours, as well as the traditional green, for mixing into cocktails. Absinthe was banned in much of Western Europe around the turn of the last century, and with the fall of the Iron Curtain, versions from places like the Czech Republic were also hard to come by. Then in the 1990s there was a renaissance, mainly led in the UK by The Idler magazine, which discovered it had never actually been banned in the UK. Now countries across Europe have once again begun production.

The Eichelberger micro-distillery in Germany makes a clear (as apposed to the traditional green) version that’s a cheeky 83.2% ABV, again, mix with a little warm water and sugar and enjoy the drink that helped send Van Gogh over the edge.

Knockeen Hills is a poitín (a type of Irish spirit pronounced potcheen), and has a strength of 90% ABV. Poitín production was banned in the 1660s, but carried on illegally for centuries. Today it’s produced legally, and has even applied for geographical indication status within the EU to protect its heritage and production methods.

Deadly homebrewed moonshine made from millet, maize and sorghum, which in 2010 was responsible for the deaths of over a hundred people in Nairobi. The government introduced tougher regulation in an attempt to stamp out illegal manufacture, but this strong, cheap and deadly brew is still available if you know where to look. 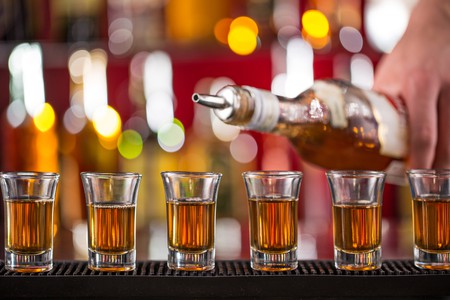 Shots of whisky on a bar | © Lukas Gojda/Shutterstock

An American cocktail featuring four neat ‘gentlemen’ spirits. It’s called the Four Horsemen because it’s made with spirits that are all named after men. The recipe calls for one shot of Jim Beam, one of Jack Daniel’s, one of Johnnie Walker and Jameson. So two Americans, a Scotsman and a Irishman, which sounds like the start of a bad joke. If that wasn’t enough, you can add extra ‘characters’; Four Horsemen go to Mexico adds one part Jose Cuervo, while Four Horsemen Go to Sea adds one part Captain Morgan rum. 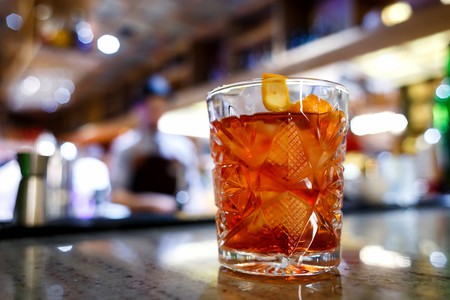 Created in Venice and named after Count Negroni who thought his Americano cocktail wasn’t strong enough, so asked the bartender to replace the soda water with gin, this apéritif is made from one part gin, one part vermouth and one part campari, served over ice with a slice of orange. Drink two, and you’ve had a third of a pint of spirits, three and you’ll be ‘out for the Count’.

Another ‘no mixers’ cocktail, Aunt Roberta calls for a shot each of gin, vodka, absinthe, brandy and blackberry liquor, all of which are over 40% proof. There’s a large, unverifiable and probably untrue back story to the drink’s creation involving a mixed raced former slave, prostitution, and hard liquor, leading one drinks website to declare: ‘The Aunt Roberta is less a cocktail than a cry for help’.

Death in the Afternoon – France

More absinthe, more literary connections, Death in the Afternoon was created by legendary boozer, hunter and author, Ernest Hemingway, while in Paris, and named after his book of the same name. He describes both the recipe, intended amount and speed of consumption thus; ‘Pour one jigger absinthe into a champagne glass. Add iced champagne until it attains the proper opalescent milkiness. Drink three to five of these slowly’. If that doesn’t write off your afternoon, we don’t know what will.

Most beers, ales and lagers sit at around 3 to 6 % ABV, with 5.2% been the average. Sink the Bismarck, an IPA from punk Scottish brewers, Brewdog, is a hefty, 41%. This isn’t even the strongest beer they’ve ever made. The End of History released in 2010 measured 52% ABV, came packaged in a dead stoat, and cost £500. They also offer Tactical Penguin at 32%, presumably for if you’ve got to work the next day.

Want more potential death and weirdness? Then you’ll love:-
11 Foods That Can Potentially Kill You

Everything You Need to Know About Eating Testicles