Virginia Woolf is a name synonymous with modern British literature. Her ground-breaking writing redefined the way we understand the female experience, carving out new forms of feminist thinking that has inspired not only her contemporaries, but subsequent generations. This legacy has formed the basis of a new exhibition at Tate St Ives, which brings together over 80 artists and 250 works spanning over 100 years.

Although Woolf focused on the written word she was absolutely embedded in the visual arts, as the creative influences within her circle were inextricably intertwined. For example, her sister, the painter Vanessa Bell, designed numerous covers for Woolf’s book jackets and painted her portrait, along with other members of their London ‘set’, including Duncan Grant and Roger Fry. 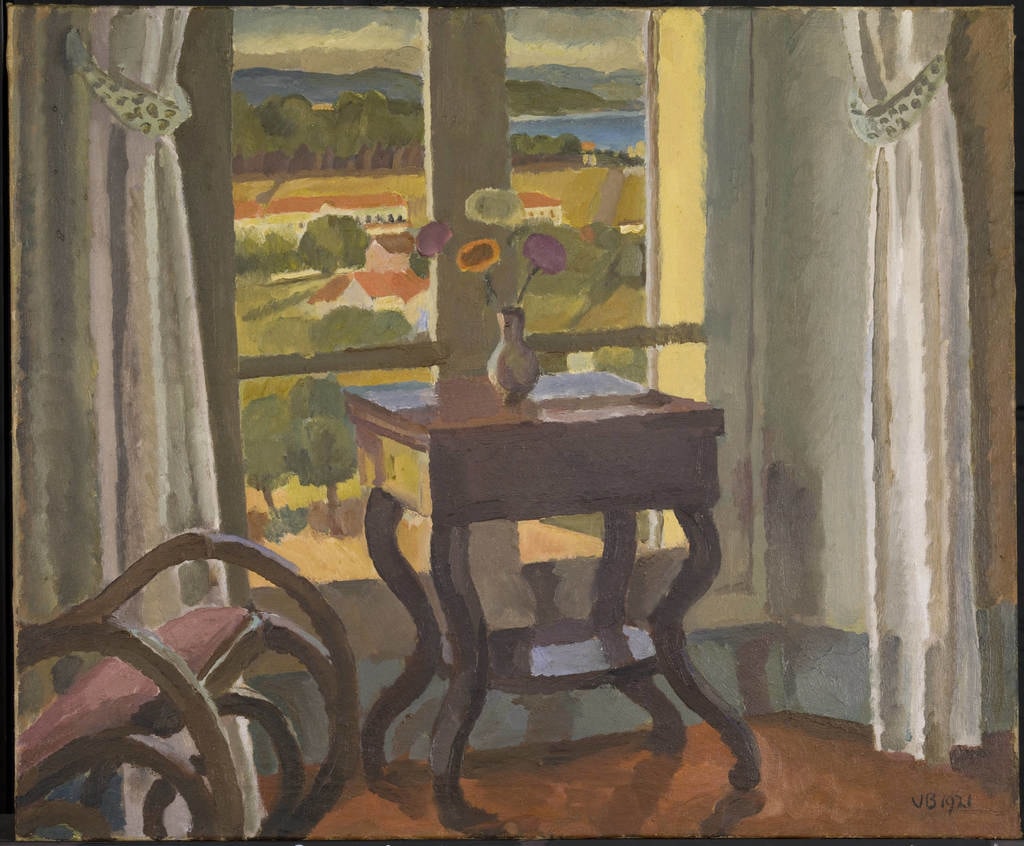 Though Virginia Woolf: An Exhibition Inspired By Her Writings does feature artists that Woolf called contemporaries, including Bell, Eileen Agar and Ithell Colquhoun, its scope extends far beyond this remit to include contemporary practitioners like punk-collagist Linder, modern-day surrealist Penny Slinger and conceptual video-performance artist Hannah Black, all of whom use a similar interrogation of language (either visual or written) in their work.

Curator Laura Smith explains this reasoning: ‘I started with a backbone of artists who were directly connected to her, or directly cited her, but then it felt a bit didactic, so I looked at others who shared the same approach as Woolf to landscape or domesticity or the presentation of the self.’ 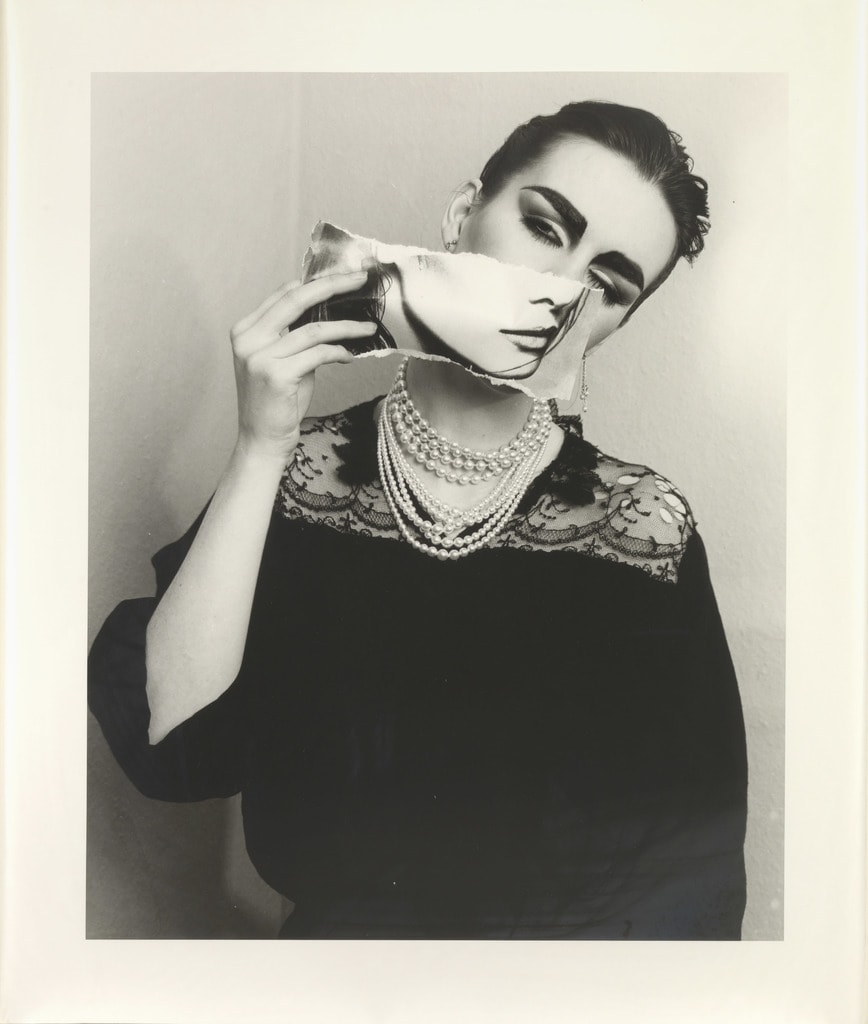 These three themes form the core narrative of the exhibition, and demonstrate just how influential Woolf’s writing has remained. It is almost impossible to imagine that her entire archive was sold to the New York Public Library ‘for pennies’ in the 1980s, when her books had become unfashionable in the UK. It was here that Smith conducted much of her research, and recognised the threads that weave through Woolf’s novels and remain prevalent in the work of so many artists who seek to investigate and redefine the feminine psyche.

The theme of ‘landscape’, which opens this show, was always in Woolf’s consciousness, whether it be a specific, physical space, or one that represented human identity on a larger scale. ‘The way that Woolf wrote about landscape was as a collaborator or a partner, Smith says. ‘She said that she wanted to write landscape as “visibly vivid but semantically blank”, so she didn’t want to impose human meaning on it; she wanted to be with it.’ 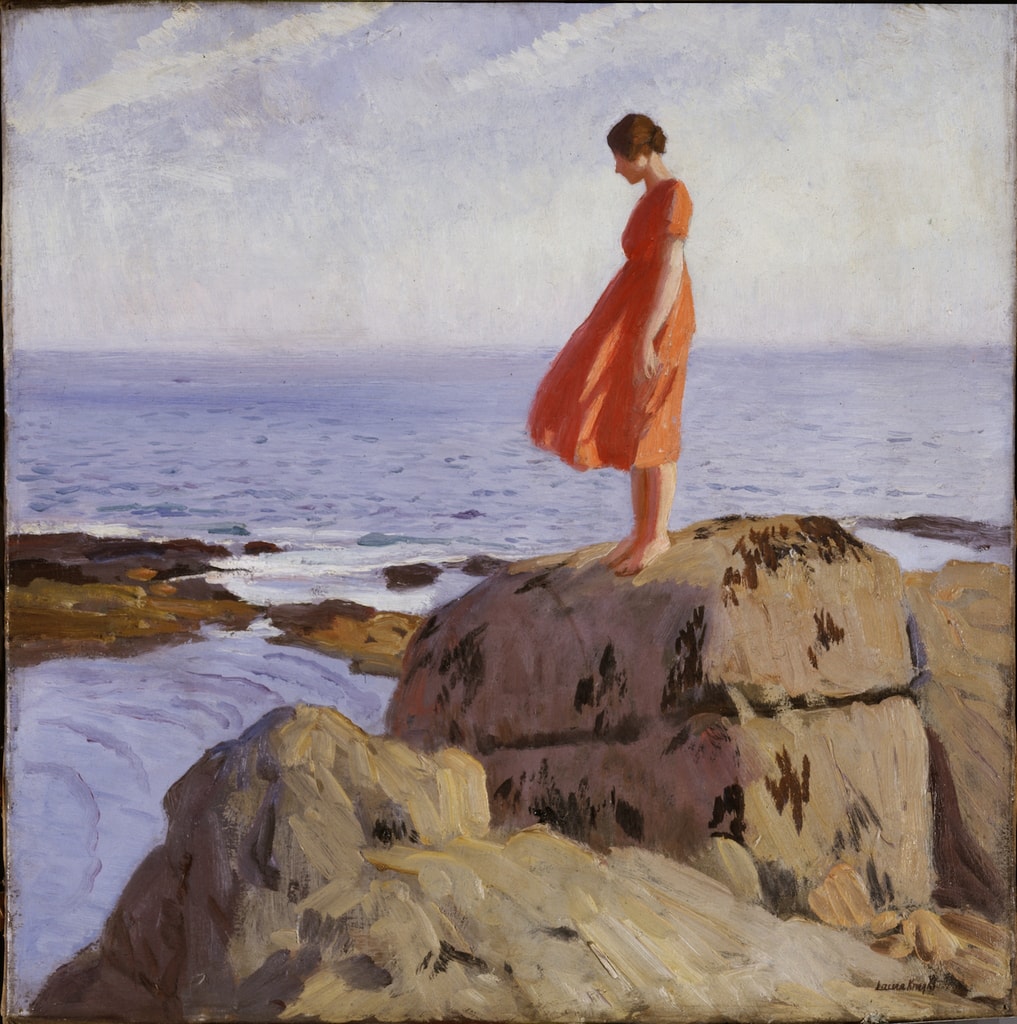 This idea of embodying natural surroundings, as opposed to forcing meaning upon them, was crucial for many female surrealists and modernists, who wanted to remove the prescriptive approach to depicting landscapes as tools for specific messaging, which had been fostered by a traditional, male-dominated narrative.

Wilhemina Barnes-Graham and Dora Carrington both experimented with horizon lines in order to change the viewer’s perception of space and Barbara Hepworth’s exceptional, curvaceous sculptures were directly informed by the rock forms and waves of St Ives. These incredible, often monumental, works challenged the hierarchy of positive and negative space and are always most harmonious when viewed outside, among the elements that inspired them. 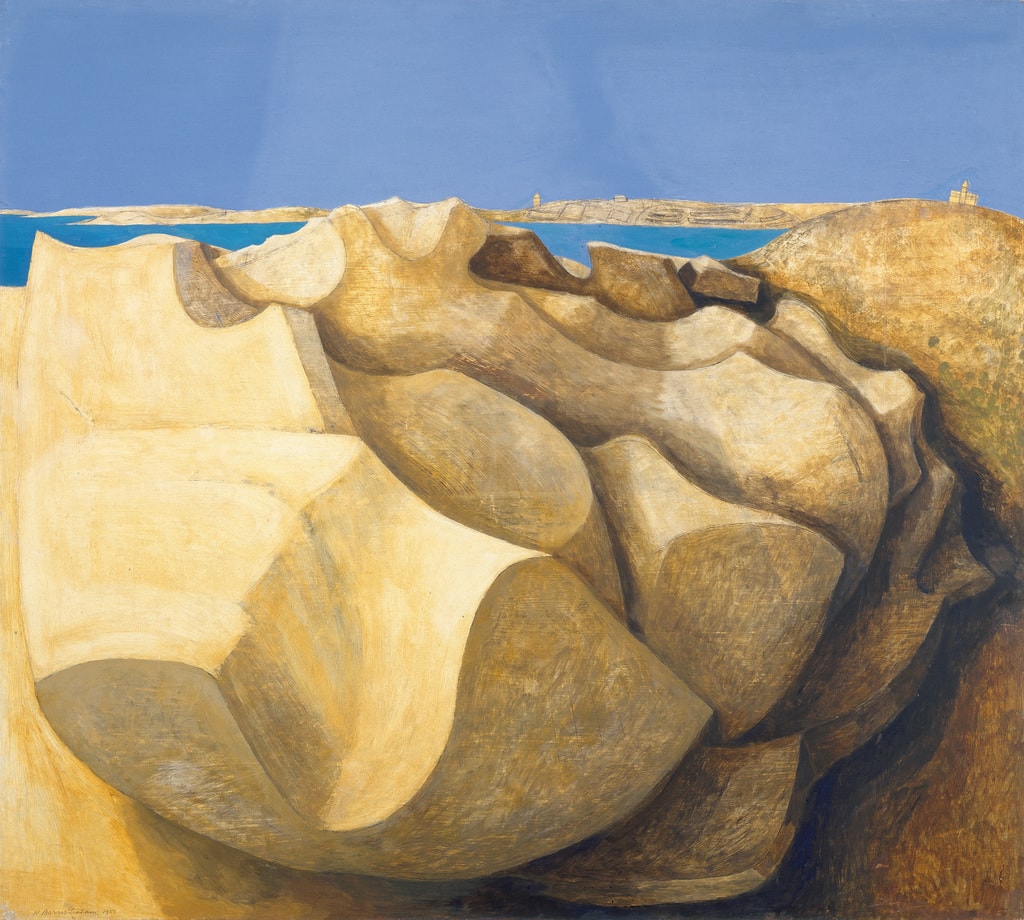 Much like Hepworth, St Ives was a precious destination for Woolf. She spent every summer holidaying at Talland House, until her mother’s death, when the trips came to an abrupt halt. She revisited the house, along with her sister, once her father had died, but the visceral childhood memories of the seaside town was always in her thoughts.

In fact, The Godrevy Lighthouse became the muse for her 1927 novel To The Lighthouse

, which is lauded for its focus on emotion and observation as opposed to dialogue and action. A first edition, featuring cover art by Vanessa Bell, is displayed in this exhibition. 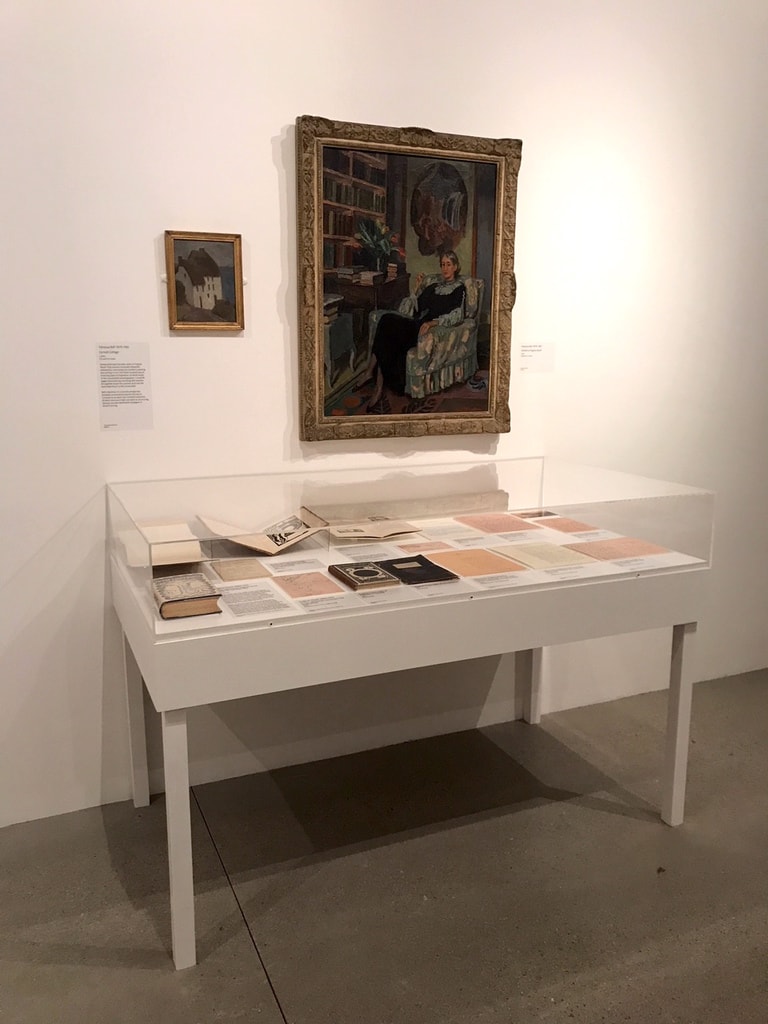 The second, mammoth theme of this show is the idea of the domestic interior, inspired by Woolf’s pivotal text A Room of One’s Own

. The title has become something of a go-to reference when discussing the concept of female autonomy, where a woman has the opportunity to create and harness her own creativity and independence through a defined space. Paradoxically, it also alludes to the idea of a closed, oppressive environment, where women are shackled by their domestic duty. Both interpretations are evident in this exhibition.

Wilhemina Barnes-Graham presents an intense depiction of a roaring sea through her studio window, as if the madness of the outside world is about the break into her sanctuary. Meanwhile, Tina Keane borrows from both Woolf and Charlotte Perkins Gilman (the American author of The Yellow Wallpaper

) in her frenetic video of clawed-at walls and cut-up imagery.

The wallpaper motif also extends out into the gallery, with a reinterpretation of a pattern created by the Omega workshop (a design offset of the Bloomsbury Group) surrounding various archive materials that show the cyclical inspiration between Woolf and her fellow creatives. Further on, France-Lise McGurn has presented a new painting against the backdrop of an entire wall covered in deft lines that show hundreds of women in various languid poses. The piece, titled Your daughter’s daughter recalls Woolf’s matriarchal notion that ‘we think back through our mothers.’ 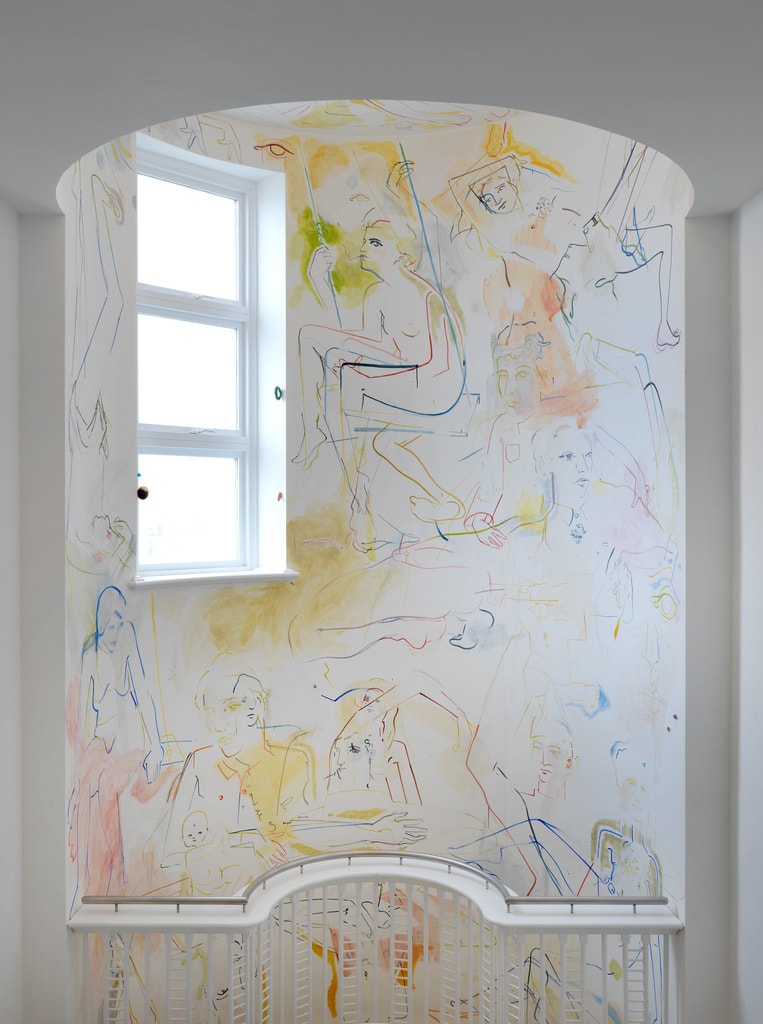 One of the most revealing elements of this show is the presence of various emphatic statements that Woolf and various friends penned over the years. For an author of such note Woolf’s legacy remains tied up in romantic associations with a languid life in London and Sussex, as opposed to her strident views on women’s rights (especially to those who haven’t actually read her books). But, as is evident in this exhibition, Woolf was ferocious in her appreciation of female strength – and it isn’t all reciprocal and supportive. In a phrase taken from Bell’s notebook called Notes on Virginia’s Childhood

she states: ‘I cannot remember a time when Virginia did not mean to be a writer and I a painter. It was a lucky arrangement for it meant that we went our own ways and one source of jealously at any rate was absent.’ 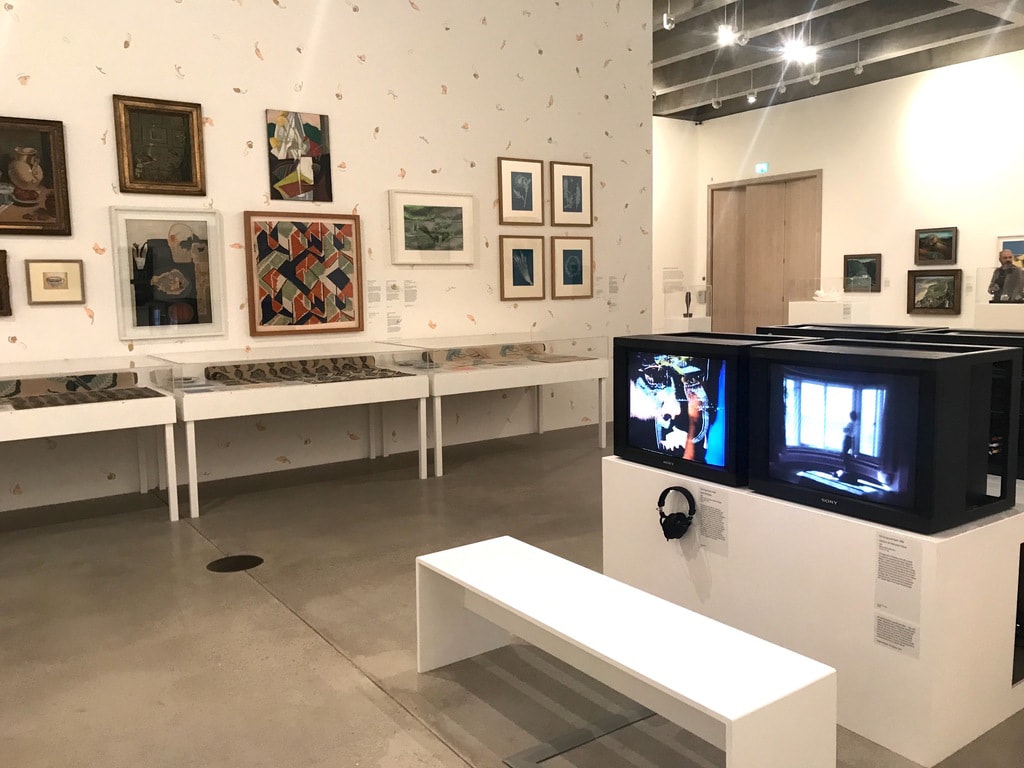 This jovial rivalry strikes an uplifting tone throughout the show, where a forced, reductive reading of universal ‘sisterhood’ – which so often inflicts itself upon all-female shows – is noticeably absent.

One final statement from Woolf (taken from Professions of Women) also serves as something of a call to arms for more shows that upend male-dominated narratives and open dialogues with a more diverse line of inquiry: ‘You have won rooms of your own in the house hitherto exclusively owned by men… But this freedom is only a beginning; the room is your own, but it is still bare… With whom are you going to share it, and upon what terms?’

Over 80 years on, it’s a question we are still asking.

Want to see more art? Here are the blockbuster exhibitions not to miss in 2018.