Will Milner, Durdle Door and the Milky Way, Dorset, 2017 | Courtesy of Landscape Photographer of the Year 2017

The spectacular wilderness and striking urban vistas of the UK are captured to full effect and mesmerising wonder with the announcement of this year’s winners of the Landscape Photographer of the Year award.

Without having to leave the comfort of your armchair, you can travel the length of the United Kingdom through these exceptional photographs taken by both amateur and professional photographers.

From puffins on Skomer to Scotland’s only oil refinery, the prestigious 2017 Take A View Landscape Photographer of the Year competition reveals the winners and commended entries in the eleventh edition of the celebrated annual coffee-table book and touring exhibition. 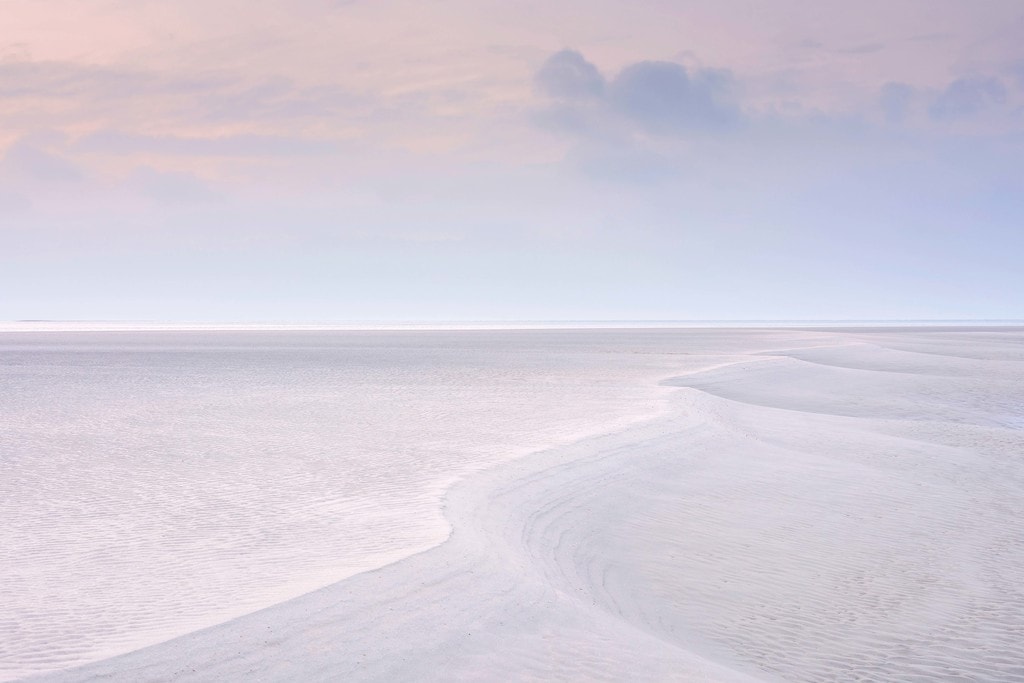 Benjamin Graham has been announced as the competition’s overall winner for his beautifully minimal shot which makes the dunes in West Wittering look more like an Arabian desert than West Sussex. Taken just ten minutes after the sun had set, Graham was drawn to the subtle relief of the sand forms and the indeterminate scale of the vista.

Taking the coveted title of overall Young Landscape Photographer winner is 15-year-old Andrew Bulloch for his brilliantly juxtaposed image of a skatepark lit by the Aurora Borealis. Taken on the evening of Mother’s Day, his unconventional approach of replacing the usual mountainous terrain often featured in photographs of the Northern Lights evidently caught the eye of the judges and makes for a refreshing view of this atmospheric phenomenon. 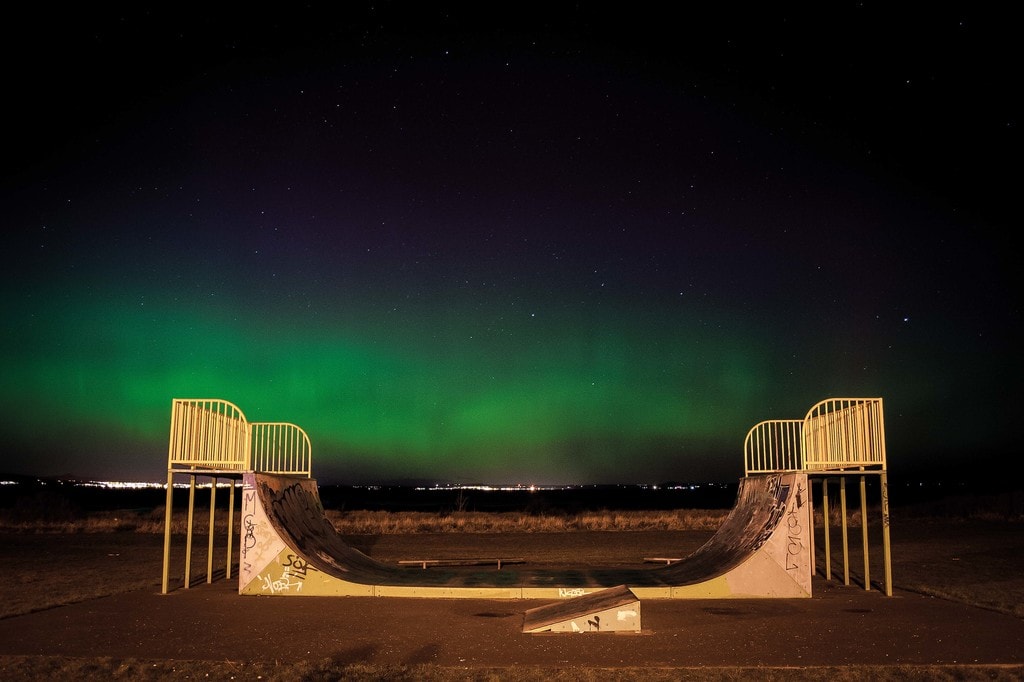 With four categories: Classic view, Living the view, Your view and Urban view, photographers were able to express in a variety of artistic and conceptual approaches to capturing all manner of landscapes.

The ‘Your view’ category no doubt gave photographers lots of freedom to experiment, with many entrants exploring the abstract quality of landscape. Neil Burnell’s striking, if slightly spooky, winning image of beach huts is the perfect example. This unlikely take, devoid of human presence and in subdued colour tones, gives the huts a mysterious, otherworldly appeal.

Colin Bell focused on the ‘confusion of elements in the scene’ at the small quarry of Dalt Woods, a favourite autumn walking spot for the highly commended photographer. Here, reflections of nature play with the viewer as the eye is drawn around the image’s many intriguing focal points. 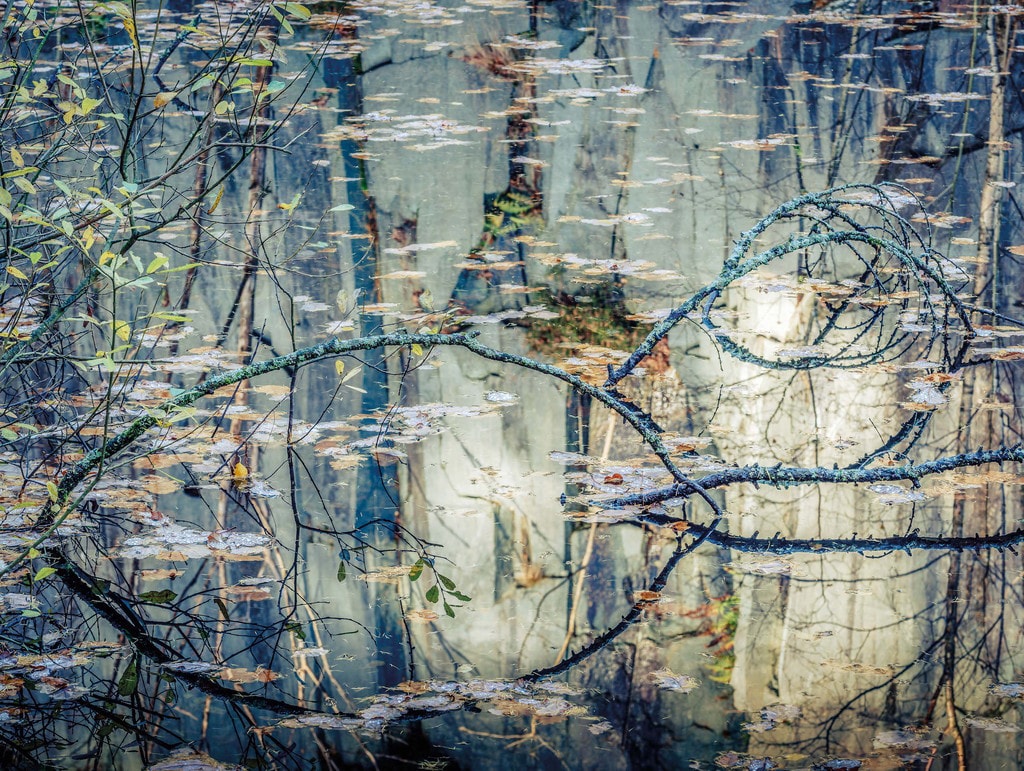 Paul Fowles won the adult class of the ‘Living the view’ category, for his remarkable shot of the Caban Coch Dam in Wales in natural waterfall mode after Storm Doris in early 2017. Fowles said of capturing the shot, ‘The site of the dam in this state is quite spectacular. However, I couldn’t make an image I liked, as there was no sense of scale. The lady in the photograph is my wife, who “volunteered” to stand on the bridge in front of the raging torrent so that I could get this shot.’ 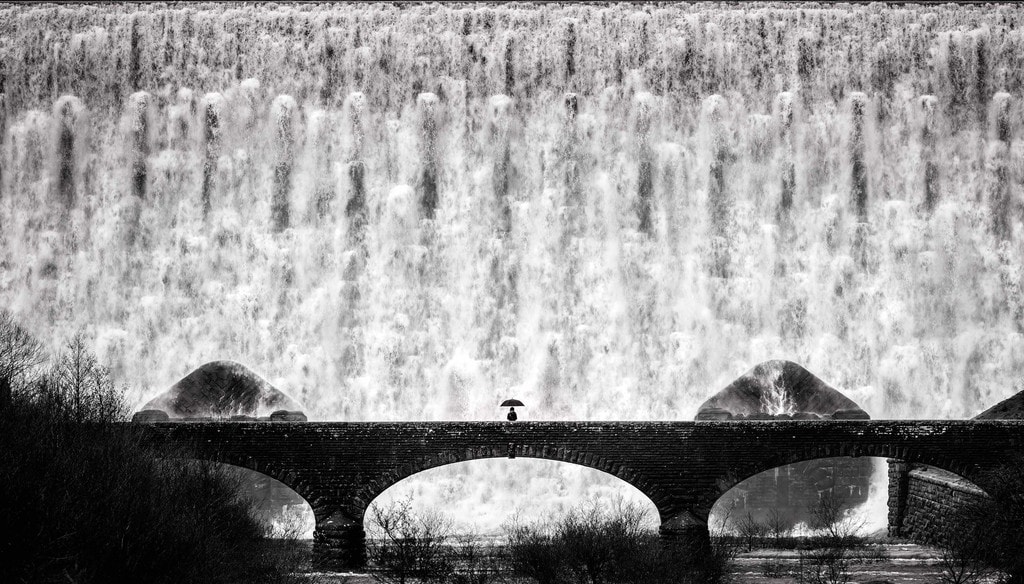 And from one extreme weather occurrence to another in the same category, with Jon Brook’s photograph of gamekeepers burning back the heather due to a prolonged dry autumn season in Yorkshire. His composition of a gamekeeper just in view, gives this controlled situation an Armageddon-like sense. 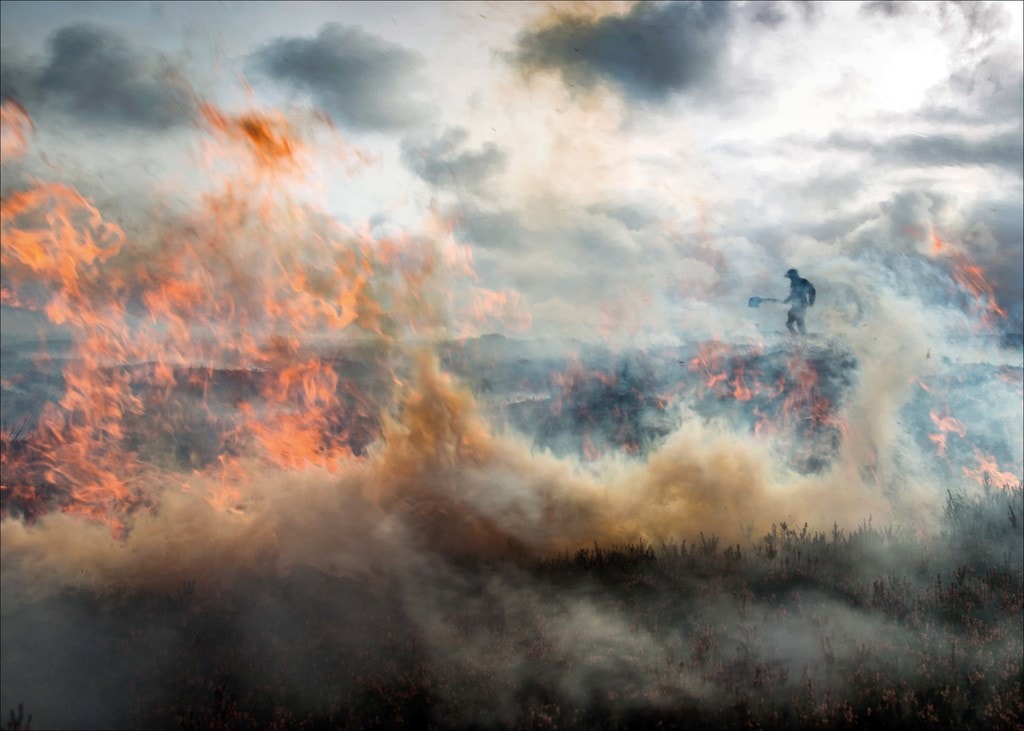 As with previous years, the winning images will go on tour round the country, starting at London’s Waterloo Station in November. Here are a few more of the impressive photographs you’ll see in the book and show. 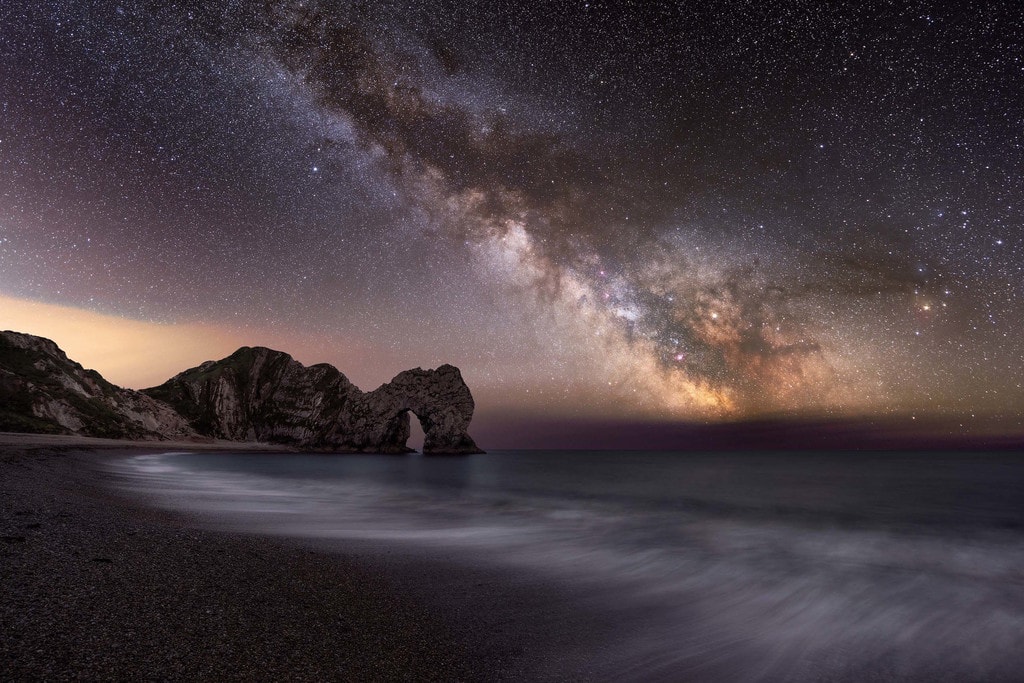 Will Milner, Durdle Door and the Milky Way, Dorset, 2017 | Courtesy of Landscape Photographer of the Year 2017 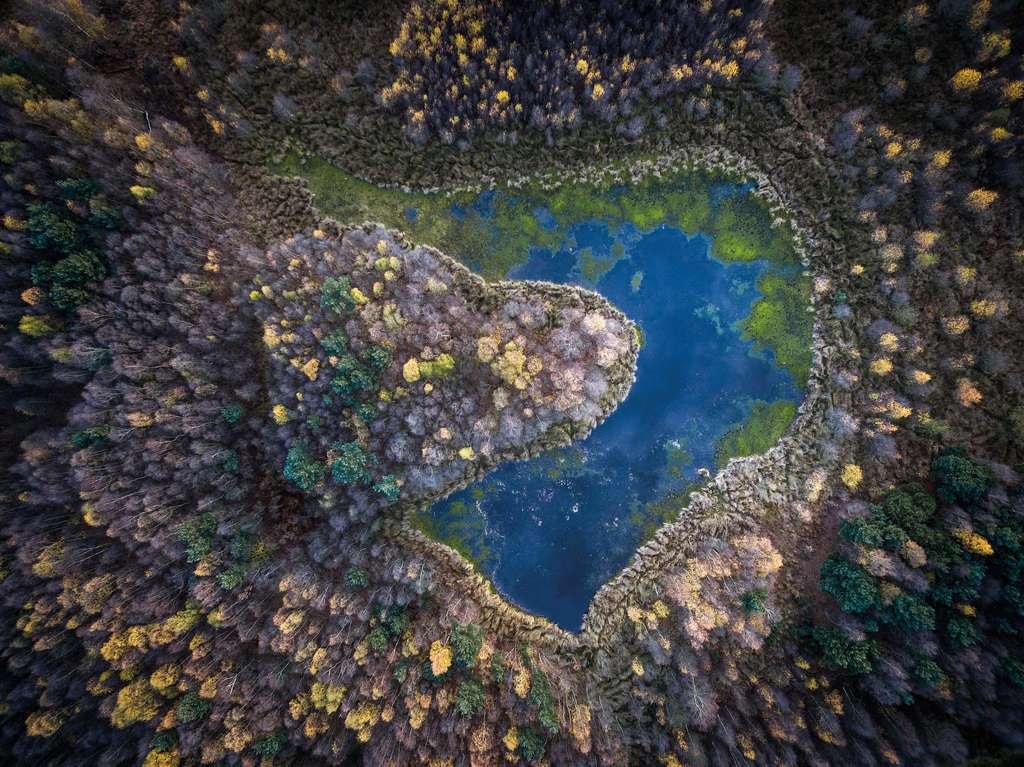 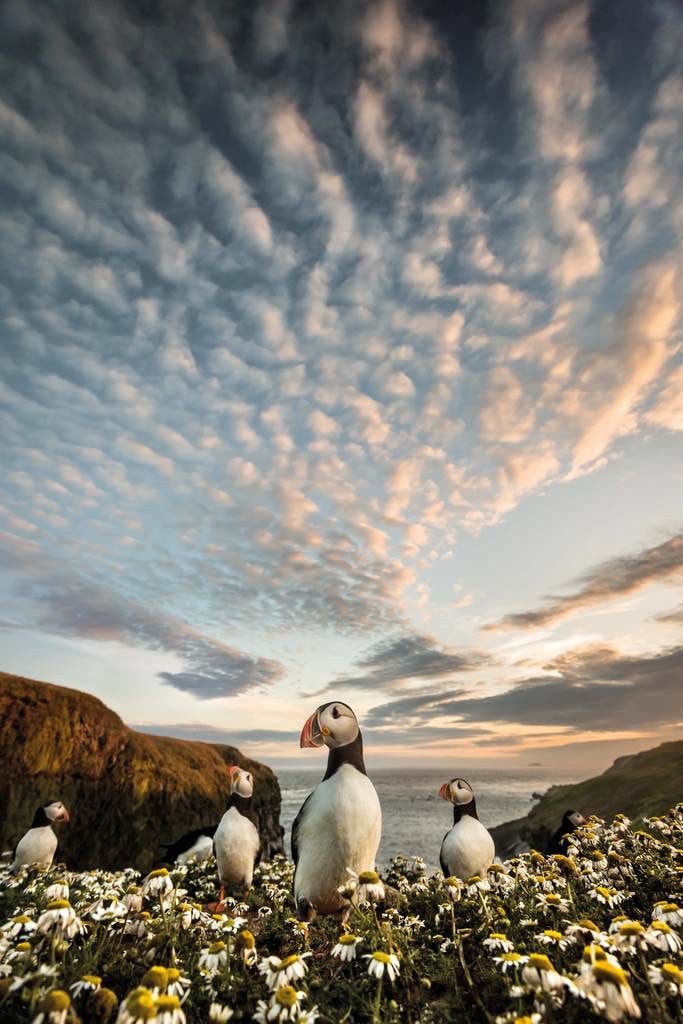 Matthew Cattell,Wildlife on Skomer | Courtesy of Landscape Photographer of the Year 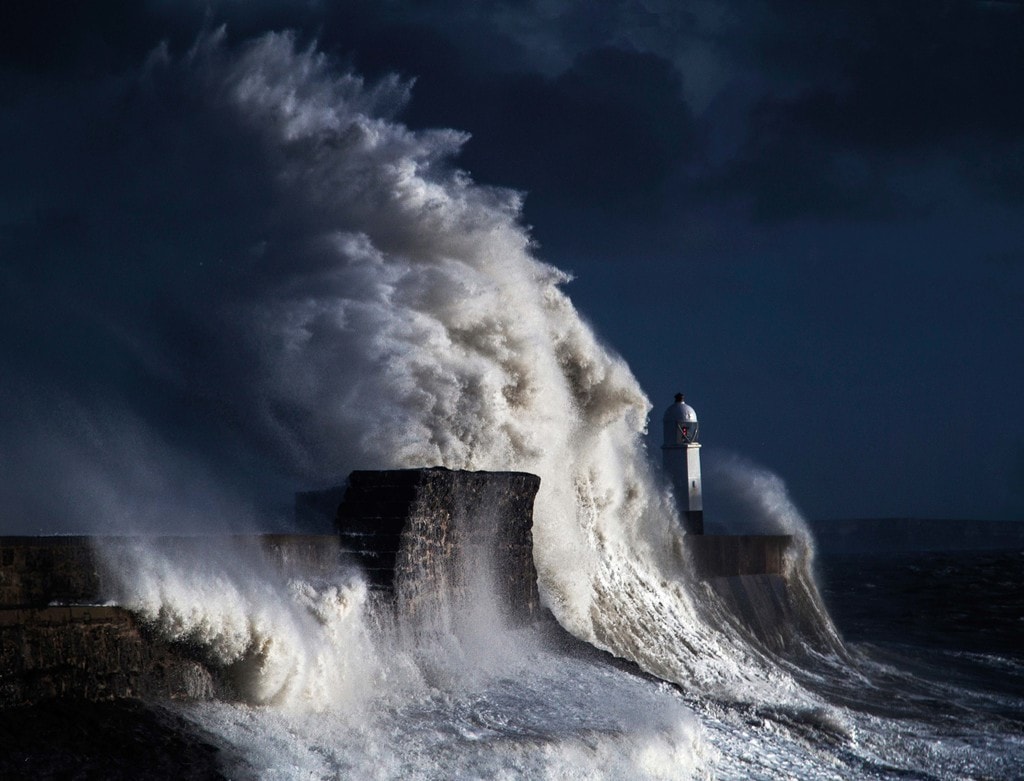 Adam Walters, Where the Ocean meets the Sky, Porthcawl Lighthouse, South Wales, 2017 | Courtesy of Landscape Photographer of the Year 2017

George Robertson, Grangemouth refinery at night, 2017 | Courtesy of Landscape Photographer of the Year 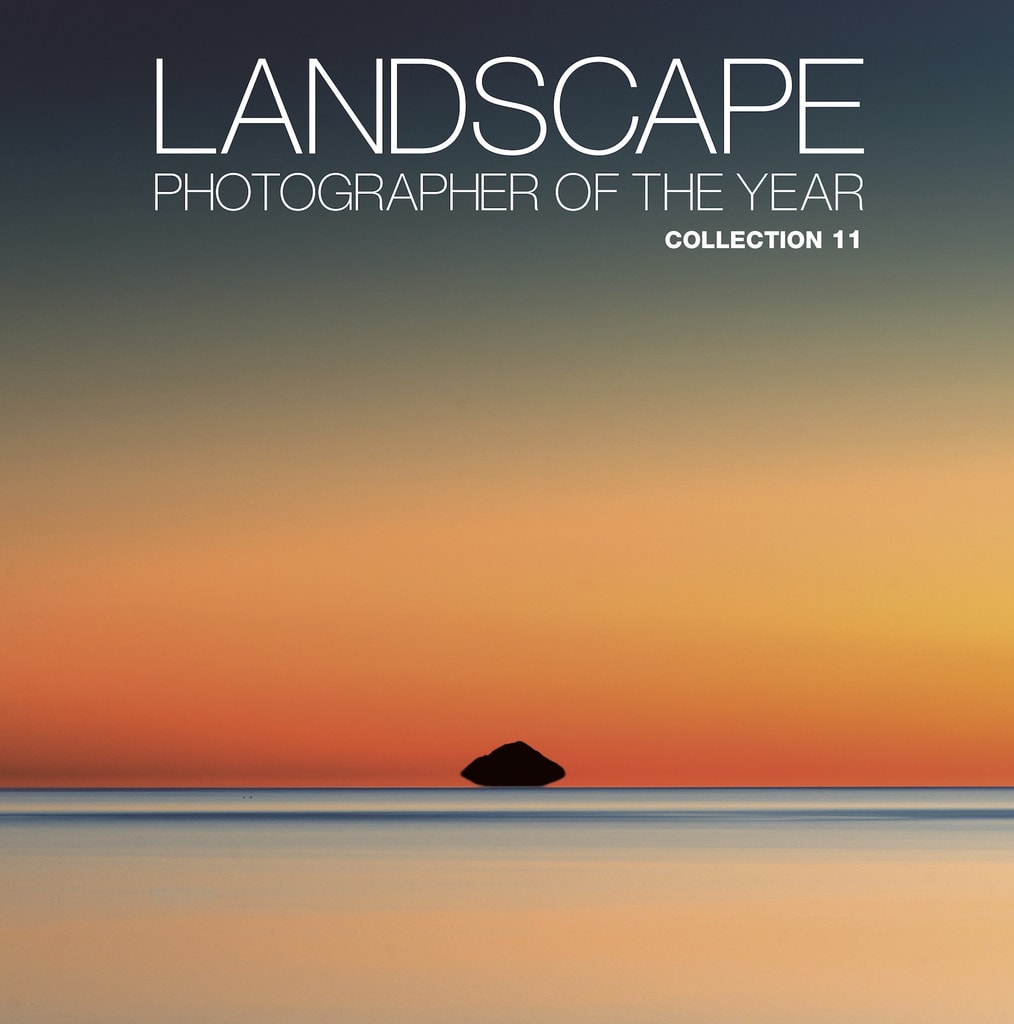 Landscape Photographer of the Year: Collection 11

Take a View will be at Waterloo Station from November 20 until February 4, 2018, before going on nationwide tour.

Want to see more photography of life around the UK? Check out Portrait of Britain