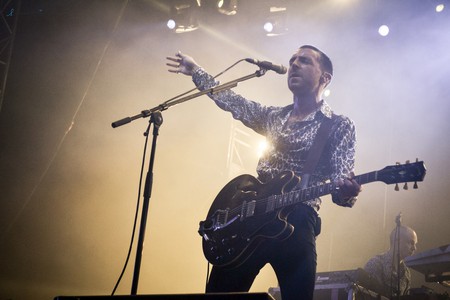 The British music scene is a fusion of talent ranging from heavy rock to hazy psychedelic pop. Over the last few years there has been a proliferation of idiosyncratic artists, influenced by those who pushed the boundaries of social convention. Culture Trip breaks down the top British bands and artists you should follow.

The four piece indie rock band from Oxford released their debut album Zaba in June 2014. Lavished with synth beats the album is an amalgamation of seemingly divergent musical genres, from R&B to psychedelic pop. Dave Bayley, the band’s lead vocalist, originally trained to become a doctor at London King’s College before being signed to Paul Epworth’s label Wolf Tone. Their musical style flows smoothly throughout the 11 piece debut, resonating similar sounds to that of alt-J and FKA Twigs. Their second album How to be a Human Being is set to be released this August with the single Life Itself being the first taster from the album. Playing to sell out shows at some of the most prestigious music events in the country, including Glastonbury and Reading/Leeds Festival, Glass Animals have stormed the music scene, with over 2 million listeners on Spotify.

Brighton born band The Magic Gang are relatively new to the British music scene. Their EP was released earlier this year and included five songs, one of the most popular being the poppy number Jasmine, exploring a relationship slowly falling out of love. Their single No Fun (2015) shows how they are anxious to continuously broaden their musical scope and not express themselves solely through one sound. They have recently finished touring with Wolf Alice and are set to play at Huntingdon’s Secret Garden Party this July as well as the London Roundhouse in October. Inspired by the music of Tame Impala and Unknown Mortal Orchestra, their upcoming album is likely to criss-cross through complex layers of sound- strap yourself in for the ride.

Alex Turner and Miles Kane’s collaboration began when they released their first album back in 2008. Now, eight years later, the two have released Everything You’ve Come to Expect, an album flushed with hazy guitars and Turner’s unmistakable croon. Best known for his lead vocals in Arctic Monkeys, the Sheffield born star continues to incorporate classic guitar anthems as well as embracing his full vocal range in the sultry ballad Sweet Dreams, TN. The two are currently touring worldwide to sell out shows in London, Detroit and Belfort. In the past eight years since their debut, Kane has built a solo career for himself while Turner continues to dominate the indie-rock world, smashing records with the Arctic Monkeys’ fifth studio album AM, released back in 2013. Turner and Kane are well known for their chemistry on stage, as fans worldwide remain captivated by the melodic harmony as their voices intertwine.

Norwich born duo, at only 16 and 17 years old, Jenny Hollingworth and Rosa Walton both studied music at college and never anticipated that they would eventually make a career out of their kaleidoscope pop. Their 2016 EP Eat Shitake Mushrooms was titled after a piece of graffiti on a wall at college, an accurate representation of how the two take seemingly mundane aspects of everyday life and dress it up in fresh synth tones. Constantly mistaken for twins, Jenny and Rosa began recording the album two years before finalising the artistic piece earlier this year. I, Gemini is influenced by their interest in horror films and serial killer documentaries rather than the musical sphere they have abruptly entered, fresh faced from their GCSEs.

Formerly Joy Division, the English rock band formed in 1980, combine post punk with electro beats. Following in the direction of electronically synthesized music New Order released their ninth studio album Music Complete last year. Their 1983 single Blue Monday remains the best-selling 12-inch record of all time. Combining electronic beats as well as exploring a more pop oriented field in Superheated, the band have kept close to their roots and appeased a mass audience who have remained dedicated fans for the last 30 years. Lead singer Bernard Sumner’s haunting vocals captivate the listener and remain as a reminder of the band’s tragic past. Headlining Latitude Festival in 2016, the Manchester born band will play the closing set on Sunday night.

The Welsh psychedelic band, formed in 1993, have recorded nine studio albums over the last 23 years; all of which have made the UK top 25 album chart. Signed by Creation Records in 1995, the band originally sang their earliest songs in Welsh, with In Space having achieved a Guinness World Record for having the longest title ever: Llanfairpwllgwyngyllgogerychwyrndrobwllllantysiliogogogoch. After seven years, the band released their newest single Bing Bong in May 2016. Influenced by their earliest techno roots, the EP was initially created to make a song for the Euros but the band wanted to ensure they captured the classic ‘Furry’ sound. With its rhythmic chants and captivating techno beat throughout, it’s easy to see how the single emulates the excitement and ferocity of a football crowd.

The Scottish synth pop band, Chvrches, formed in Glasgow in 2011. The three piece band consists of vocalist Lauren Mayberry, Iain Cook on guitar and Martin Doherty on synthesizers and backup vocals. In January 2013 Chvrches signed to Glassnote Records and made their TV debut on The Late Night Show with Jimmy Fallon. Mayberry has also taken a stand against sexist comments directed towards the band and continues to vocalize the need for gender equality in the music world. Their debut single The Mother We Share reached number 38 in the UK Singles Chart and two years later their second studio album Every Open Eye was released in September 2015. The band incorporates synth pop as well as indie pop and alternative dance into their 11 track album and sold 15,844 copies in its first week of release, debuting at number four on the UK album charts.