Top 7 Traveller Personality Types: Which One Are You? 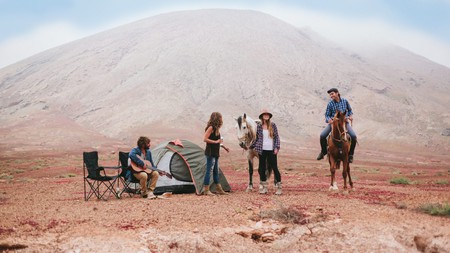 Travel is all about meeting new people. Whether it’s the know-it-all Einstein or rambunctious Party Animal, you’re guaranteed to come across these personality types when travelling.

Travelling as a group is a sociable experience. The conversations you have and the jokes you share shape your journey just as much as the places you visit and the activities you take part in. Not only will you meet people from a diverse range of cultural backgrounds, you’ll be encouraged to break out of your comfort zone and try new things.

There will be times when you feel like doing your own thing, of course, but sharing experiences with others is enriching – and could lay the foundations for long-standing friendships. At the very least, you’ll always have someone there to save you from taking a selfie.

Every individual contributes something to the overall group dynamic. Here, Culture Trip have gathered seven traveller personality types you’re likely to encounter in any group scenario. Which one are you?

And if you’re ready for your next group getaway, check out TRIPS by Culture Trip, our expertly curated collection of small-group trips to the world’s most culturally exciting destinations.

If you hold the group up with your slower walking pace, the Control Freak will make it their duty to ensure you promptly up the tempo – as if they think they’re your personal trainer. Or, if you’re audacious enough to turn up late to the agreed meeting times – even just by a couple of minutes on a single occasion – prepare to suffer the wrath of the Control Freak, who bursts into a round of sarcastic applause when you arrive, suggesting in somewhat patronising tones that you set a reminder on your phone next time. When you’re out for dinner, they’re the type to start badgering the restaurant staff if the food hasn’t arrived within 10 minutes of ordering, while the rest of the group cringes with embarrassment.

You may have various local guides with extensive first-hand knowledge about the places you’re visiting, but that doesn’t stop the Einstein from attempting to stamp their own authority on proceedings by providing running commentary throughout the trip. Armed with a fact or anecdote for every situation, they give off the aura that they know what they’re talking about. They’re a useful travel companion to have, but over time suspicion grows regarding the veracity of the Einstein’s apparent insight, and their unrelenting attempts to replicate Sir David Attenborough become increasingly tedious for the rest of the group. Just because they studied geography 15 years ago doesn’t mean you should feel compelled to sit through their encyclopaedic monologues.

Think you’re heading out for a few casual beers and some intellectual conversation? The Party Animal has other ideas. They’ll keep ordering trays of tequila shots for the group until the early hours whether their fellow travellers like it or not. Just when you think the night is winding towards a natural conclusion, another round of jägerbombs arrives – the Party Animal is just getting started, and takes pride in their ability to swig copious amounts of alcohol like it’s water. The rest of the group watches on – half-amused and half-disapproving – as the Party Animal takes to the dance floor and starts throwing shapes with all the swagger of the Inbetweeners in Malia. At this point, you know it’s time to go to bed and leave them to it. Inevitably, they spend the next day in a deep, hungover haze – only to go and do it all over again at the next available opportunity.

Even though they’ve probably never driven outside their own country before and only have very limited knowledge of the local area, the Backseat Driver can’t just sit back and enjoy the ride. Instead, they feel fully qualified to offer guidance to whoever is behind the wheel – akin to a human satnav who doesn’t actually have a clue where they’re going. Whether they think the driver is going too fast, too slow, driving in the wrong lane or driving in the wrong gear, they’ll be sure to let them know – just like a self-appointed driving instructor. The Backseat Driver’s incessant pedantry starts to grate on their fellow passengers – and the actual driver – until frustrations spill over and they have to be told to rein it in, or else face being dumped at the roadside.

Every journey needs a soundtrack, and there’s always one traveller in every group who assumes the role of Playlist Dictator. This could happen by general consensus or simply because no one else can be bothered – and they’re quite happy to leave them to it. At least until the singing along becomes unbearable and someone has to lead a Spotify rebellion – or savagely seize and hurl their friend’s phone from the window during the fifth outing of Ed Sheeran. But remember, a friend is a friend. Try to keep the peace and request songs to be added to the queue, ultimately leaving the Dictator in charge.

Whichever country you’re travelling in, there’s bound to be someone in the group who speaks the local lingo – or at least enough to be able to order a beer. They make no secret of the fact, and waste little time in showing off their apparent expertise. At first, everyone is very impressed, until their multilingual companion is suddenly thrust into an actual conversation and the handful of phrases memorised from Google Translate fall flat. Or maybe they are a genuine language boffin and switch between tongues like Jason Bourne. Either way, at least they’re brave enough to put it into practice.

Sinking your teeth into freshly prepared local food is one of the most enjoyable things about travel – but for some, waiting until set meal times just isn’t an option. The Hungry One piles their plate ludicrously high at the breakfast buffet and always seems to have some kind of snack on the go throughout the day: street food, bag of chips, choccy bar – you name it. If their stomach is growling, the only thing they’ll talk about is food – as if they are in the throes of a life-or-death emergency. Good luck if you end up having to share with them at the dinner table.

Ready for your next group adventure? Check out TRIPS by Culture Trip – curated by travel experts, led by Local Insiders, and designed for curious travellers who value shared experiences.