In an ideal world, every musical theatre lover would live in close distance to London’s fabulous West End. While this sadly isn’t possible, a superb selection of musicals is currently reaching beyond the bounds of the capital, so you can simply wait for the shows to come to you. Here is our round up of five fantastic feel-good classics arriving on your doorstep soon! 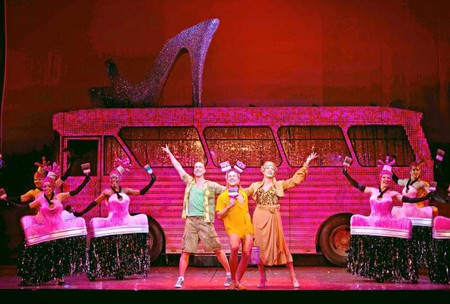 Priscilla Queen of the Desert

Theatre-land mourned on New Year’s Eve 2012 when the fabulous Priscilla Queen of the Desert gave its final performance on the West End. Thankfully, it wasn’t long before the eponymous bus took to the road for real on a tour of the United Kingdom. Fed up of the Sydney drag scene, protagonist Tick journeys across the Australian outback accompanied by his old friend Bernadette, a no-nonsense veteran transvestite, and flamboyant fellow drag act Felicia Jolly-good-fellow, in the battered but beloved old bus named Priscilla. On this tumultuous ride the three meet their fair share of homophobic prejudice, but ultimately rise above it through their heartwarming camaraderie, humour, and a series of sassy disco numbers. The score is made up of disco classics such as ‘I Will Survive’, ‘MacArthur Park’, and ‘Hot Stuff’, each of which is given a new life and panache when orchestrated in musical theatre style. The production is a technical masterpiece, featuring a life-size revolving LED light encrusted bus, which is at one point garnished with the iconic giant silver stiletto as Felicia performs ‘Follie! Delerio Van È Questo’. The same can be said of the breathtaking costumes, featuring a dress made entirely of flip-flops, cupcake outfits, and candy coloured jumpsuits to name a few. You are guaranteed to end the evening on your feet singing and dancing along, and leave the theatre with a smile that you won’t be able to wipe off your face for days to come.

Opening at Manchester Opera House on 20th August, further dates to be announced.

What do a gaggle of nymphomaniac geriatrics, a theatrical director so camp that he makes Graham Norton look positively butch, and the largest glitter encrusted swastika to have ever existed have in common? Mel Brooks’ tongue-in-cheek musical, The Producers, is the answer. Max Bialystock is a derelict theatrical producer, floundering in the fickle world of theatre in which every show he presents is doomed to close on the same night it opens. So, when his snivelling and spineless accountant Leopold Bloom unwittingly points out how he could make more money with a show that flops than with a hit, Max jumps at the chance. The plot follows their journey to produce the worst play ever written – ‘Springtime for Hitler’, by the eccentric German playwright, Hans, who comes complete with lederhosen and homing pigeons, and who humorously stomps and bellows his way around the stage. Comedy oozes from every aspect of the show’s delivery, and is accompanied by an upbeat score with hysterically penned lyrics. It would be difficult to choose a favourite musical number, but the climax of ‘Springtime’, featuring camp goose-stepping and a very large Frankfurt sausage, is spectacular. Max’s dexterous solo, skilfully performed by the faultless Cory English, ‘Betrayed’, is also a highlight and joy to watch. Comedian Jason Manford also shines as the shrieking and hysterical Leo, and has a clear and beautiful singing voice. The Producers is truly outrageous in every sense of the word, revelling in its political incorrectness, and is a show not to be missed. 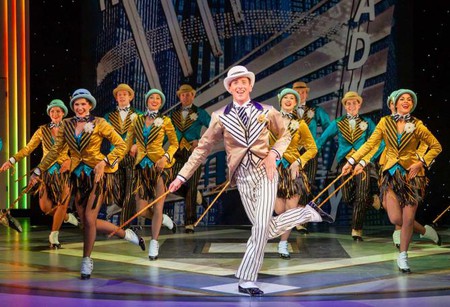 The music of Irvine Berlin is undoubtedly some of the most exquisite to ever grace this earth, which is why taking a trip to see Top Hat is a must-do for this summer. It is one among many of Berlin’s musicals that began life as a film featuring screen legends Fred Astaire and Ginger Rogers. The scene is set in 1930s London, in the elegant and sophisticated Ritz, where cheeky entertainer Jerry Travers occupies the room above the feisty female protagonist, Dale Tremont. As with any Fred and Ginger plot, the storyline features a dose of mistaken identity, a spell of misunderstanding, and the customary flirtatious chemistry between the hero and heroine. Each musical number is astonishingly tuneful, and accompanied by astute and witty lyrics; gems like ‘No Strings’ and ‘Isn’t This a Lovely Day’ which appeared in the original film are accompanied by additional Berlin numbers such as ‘Let’s Face the Music and Dance’, which is a real treat. The iconic dance routine ‘Cheek to Cheek’ is mesmerising, Tremont’s dress an imitation of Rogers’ angelic white-feathered gown, which sways gracefully with each polished step that Charlotte Gooch, playing Tremont, takes. So, grab your top hat, white tie and tails and hurry down to a theatre soon! 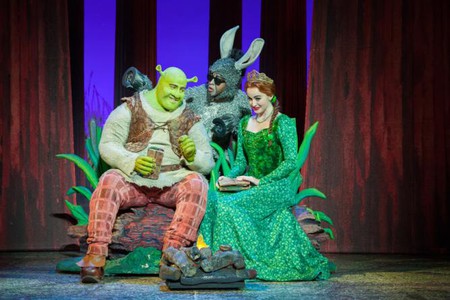 Given that the pastiche fairytale film is universally adored, the musical production had some big boots to fill – but rest assured, it certainly pulls it off. Each kooky fairytale creature is transferred seamlessly to the stage, and not a detail is lost, even down to Pinocchio’s extending nose. The plot follows unlikely hero Shrek’s journey, accompanied by his hyperactive noble steed Donkey, to rescue Princess Fiona from the clutches of a lonely lady dragon and return her to the teeny tiny tyrant Lord Farquaad. A humorous nod is given to each and every eminent fairy tale and nursery rhyme – even fellow musical ‘Wicked’ doesn’t escape the clutches of parody! Gerard Carey as Lord Farquaad gives a particularly committed performance, delivering the whole show from his knees in order to imitate Farquaad’s vertically challenged disposition, creating endless comedy with his overtly camp delivery. Idriss Cargbo is fantastic as Donkey, maintaining a relentless energy and expressive posture throughout the performance, making his character more and more loveable by the minute. The production is a spectacle to say the least, with an extensive and impressive set, and a costume and make-up department that deserves a medal; it is simply a delight for both the eyes and ears.

Touring until 20th February 2016, closing at The Lowry, Salford. 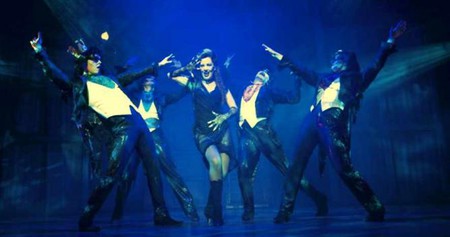 Following the successful 40th Anniversary Revival Tour, The Rocky Horror Show is time-warping its way around the UK once more. What is so unusual about this musical is that the show begins before the performance has even started, as you observe your fellow audience members, most of whom are hysterically dressed up as one of the principle characters. The show is a cult classic, with a purposefully ropey plot imitative of the stereotypical sci-fi horror B movies that were played second at double feature cinema showings from the 1940s to 1970s. When Brad and Janet, a prim and proper newly engaged couple, break down on a dark and stormy night they seek help at the manor of transvestite-come-scientist Frank-N-Furter. Their fateful transgression into this strange abode of pelvic-thrusting madness leads them into the depths of themselves they never knew existed, and that will ultimately change them forever. The production is crammed full of dark humour and smutty one-liners, and features more basques and suspenders than you can shake a stick at. Frank’s sassy solo ‘Sweet Transvestite’ is astonishingly funky, and it is hard not to feel euphoric when the audience jumps onto its feet and joins in with ‘The Time Warp’ (remember to learn the moves before you go!). It’s scandalous, it’s bizarre, it’s full of rock-and-roll spirit, and it’s one of the best night’s entertainment around.

Opening at The Theatre Royal, Brighton on 18th December.

Alice Barber is an English Literature student and aspiring journalist who simply loves to write. She also has an incurable passion for theatre, and, along with being addicted to attending shows, currently produces for Green Door Theatre Company.