You might have seen or heard of the recent Banksy-organised Dismaland Bemusement Park installation in Weston-Super-Mare, a theme park dedicated to the banal, featuring works from the likes of Damien Hirst and Polly Morgan. The installation inverted the traditional seaside theme-park and continued the great British line of satire that goes all the way back to Jonathan Swift in literature and William Hogarth in art. Here are ten of the smartest satirical artworks ever made. 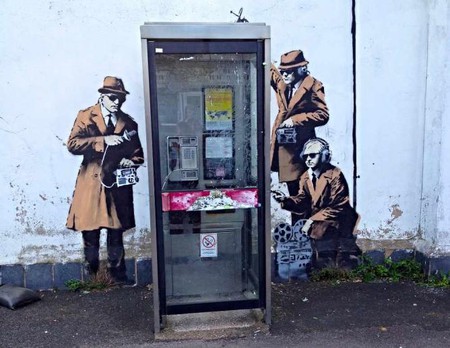 Dismaland works on the grand scale, and plenty of critics have suggested it fell flat. Banksy is at his biting and witty best on the smaller scale, exemplified by his 2014 graffiti in Cheltenham known as Spy Booth. 2013 saw the start of the Edward Snowden revelations on the level of surveillance used by western intelligence agencies. Banksy’s response was to paint three agents with listening devices onto the wall around a phone box at 159 Fairfield Road in Cheltenham, three miles from GCHQ, the British Government’s main intelligence listening station. Since going up the graffiti has been vandalised and London galleries have tried to buy it. And as it was done on a listed building the local council have had to grant retrospective planning permission so that Spy Booth can remain in place. 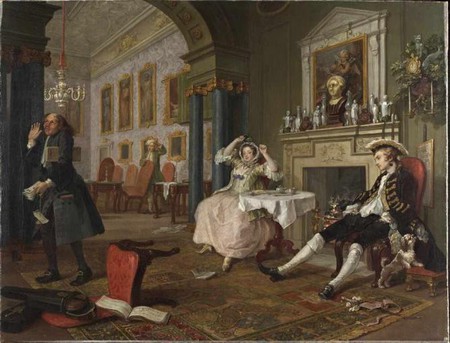 Hogarth was the master of the satirical painting. In the 1730s it was his Harlot’s Progress and Rake’s Progress that set the template for the story cycle that began in innocence and ended in dissolution and corruption. Marriage à-la-mode hangs in the National Gallery in London and was received badly when first completed, but is regarded as one of Hogarth’s finest satires today. In six canvases he takes us through the hypocrisy of an upper-class marriage, starting with the arrangement for the son of Earl Squanderfield to marry the unwilling daughter of a miserly merchant. The story goes through unpaid bills, cuckolding on the part of the wife, whoring on the part of the young lord, to syphilis and the night when the lord catches his wife with her lover, who stabs him and leaps through the window. 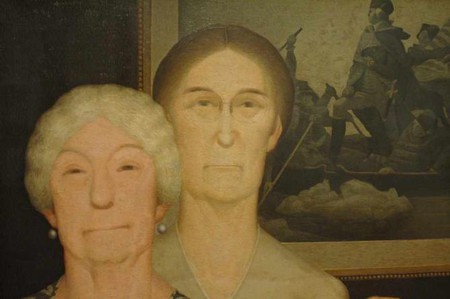 Daughters of the Revolution | © Mike Willis/Flickr

Wood described Daughters of Revolution as his only satire, but its quiet irony makes it a devastating critique of snobbery and smug elitism. In 1927 Wood took a commission for a stained glass window for a veterans’ memorial in Cedar Rapids, Iowa from the Daughters of the Revolution, a woman’s organisation for those who traced descent from men who fought in the War of Independence. They objected to his use of German glass for the Memorial and his work was rejected. A few years later Wood took his revenge. In Daughters of Revolution he pictured three members of the organisation as prim, pig-eyed, myopic old women, a far cry from their heroic forefathers. And behind them is the painting Washington Crossing the Delaware, a vital piece of iconography for the organisation. But as Wood knew, it was the work of a German, Emanuel Gottlieb Leutze in his studio in Dusseldorf. 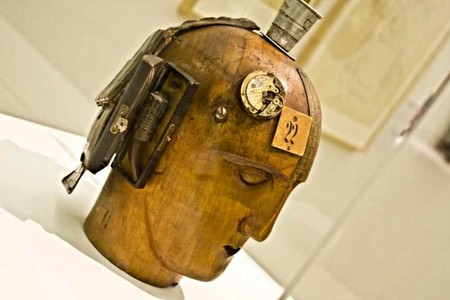 Raoul Hausmann, The Spirit Of Our Time, 1920

Raoul Hausmann was one of the leading figures of the Berlin Dada of the 1920s. Hausmann was an Austrian who worked with experimental techniques like photomontage, sound poetry, and collage and was a friend to figures like Hugo Ball, George Grosz and Hannah Hoch. In his assemblage The Spirit of Our Time he created one of the defining images of Modernism. Berlin Dada was much more political than other strains of Modernism, its tone sardonic and satirical, a reaction to the extreme politics of Germany after the First World War. The Spirit of Our Time is the head of a tailor’s dummy with a tape measure, wooden ruler, pocket watch, wallet and tin cup attached – a representation of modern man as a brainless robot whose existence is determined not by emotion or intellect but by money and mechanical measurements. 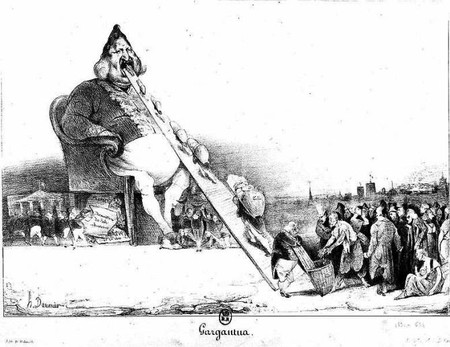 Daumier stands alongside with James Gillray as a cartoonist whose work is regarded as high art. Sometimes known as ‘the Michelangelo of Caricature’, Daumier had created over 4,000 lithographs and 500 paintings at his death in 1879. His targets were the privileged French bourgeoisie and upper-classes, especially the greed and corruption of the legal profession and justice system, and the incompetence of the Government. In Gargantua he transformed King Louis-Philippe into the famously ridiculous character from the 16th century satire Gargantua and Pantagruel by Francois Rabelais. In Daumier’s eyes the bloated and pear-headed king sits on his throne, being fed bags of coins along a plank by the poor and miserable, whilst sycophants and favourites stand beneath the throne picking up decorations. Daumier spent six months in prison for the caricature, a dig at the profligacy of the King who had recently awarded himself a salary of 18 million francs. 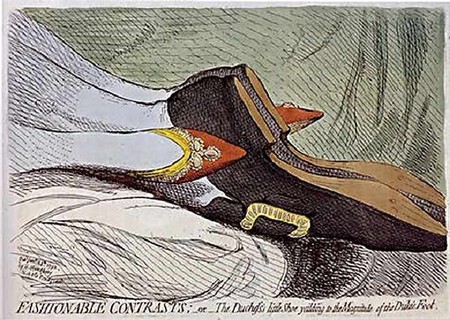 Open any history of the Regency period and you’re likely to find images by the cartoonist James Gillray. His witty, fearless lampooning of Napoleon, Pitt the Younger and the Prince Regent makes him the forerunner of the political cartoonists of our day like Gerald Scarfe and Martin Rowson. Fashionable Contrasts; or The Duchess’s Little Shoe Yielding to the Magnitude of the Duke’s Foot is one of his subtle and famous images. It was a response to the sycophancy that surrounded the marriage of the Duke of York to an unprepossessing Prussian princess, whose only striking feature was her dainty feet which the press were overly zealous in highlighting. Gillray’s response was an image of two small slippered feet beside two much larger male ones in an obviously sexual position. It was a poke at the overblown praise and flattery shown towards the royal couple, which soon abated. 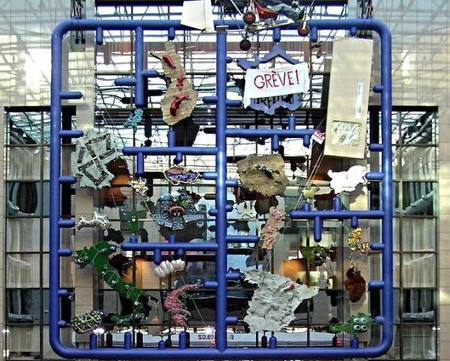 In 2009 the Czech Republic held the EU Presidency. To celebrate, the Czech artist David Cerny was commissioned to create a sculpture. He promised a collaboration of 27 artists, one from each of the EU states. What he instead created was an ironic satire on national stereotypes and a test of whether the countries could laugh at themselves. Entropa was an eight-ton installation that looked like a modelling kit, with an image standing for each of the member states. It was installed in Brussels in 2009. And then the controversy began. Diplomats from the EU countries started to notice their states were represented rather provocatively. Belgium by a box of chocolates; Denmark by Lego bricks; Romania by a Dracula theme park; France by a sign saying ‘On Strike!’; Germany by a swastika of autobahns; and the Eurosceptic UK a blank space. Removed swiftly after installation, Entropa is still displayed in Pilsen. 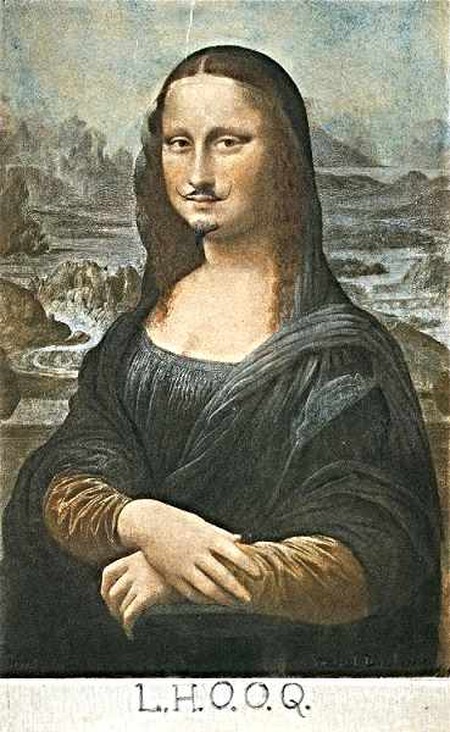 Marcel Duchamp was the original iconoclast of 20th century art, a man most famous for entering a urinal in 1917 for a New York exhibition of new works. Almost as famous is L.H.O.O.Q, a postcard of Leonardo da Vinci’s Mona Lisa onto which Duchamp drew a moustache and beard and the letters L.H.O.O.Q underneath. He made several versions in his lifetime: the original from 1919 is pictured. It represented a pointed jab at the cult of art and the artist that predominated in late 19th century France amongst the bourgeoisie and which centred on the Mona Lisa, a picture revered as the embodiment of aesthetic beauty. The letters underneath, when said in French, spell out ‘Elle a chaud au cul’, or ‘She’s got a hot ass’. It’s a smutty gag and an ironic pun based on da Vinci’s homosexuality, aimed at the complacent art establishment. 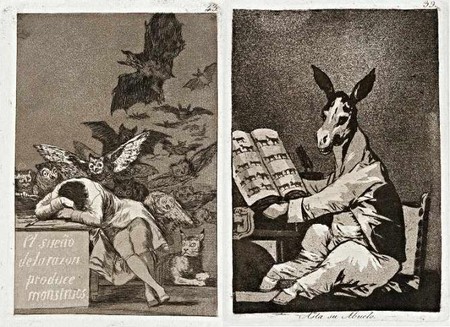 The great Spanish artist Goya is famous as the chronicler of his age, the time of the Peninsular War and Bonapartist rule in Spain. His Caprichos are a set of 80 prints satirising what he called the foibles, follies, prejudices, ignorance and deceit of his fellow Spaniards. They would later have to be pulled from circulation due to fears of the Inquisition. His targets are superstition, priests, corruption and the lack of rationality and Enlightenment amongst his fellow men. Sometimes cryptic, surreal and dreamlike in their imagery, the most famous of the Caprichos is number 43, on the left above, ‘The Sleep of Reason Produces Monsters’. In it an artist lies slumped at a desk, sleeping, and all around are owls and bats, symbols of the folly and ignorance that reveals itself when the rational mind is allowed to slumber.

George Grosz, The Pillars of Society, 1926

Grosz was a key member of Berlin Dada and the New Objectivity movement of the Weimar Period in Germany. To the great critic Robert Hughes he was the ‘master of radical sourness’, his works sardonic, satirical and full of disgust at Germany. Whores, capitalists, priests, and politicians are all mercilessly lampooned and coruscated by Grosz. In The Pillars of Society (click to see the painting) we meet four grotesque figures: first, the old aristocrat in the foreground, sword in hand, duelling scar on his cheek, misted monocle in his eye, and his open head full of visions of war. Above are the journalist, palm branch in one hand and papers in the other, with a chamber pot on his head, and the politician with socialist pamphlets and open head full of steaming dung. Lastly, there is the priest, oblivious to the burning city and marching troops behind him.