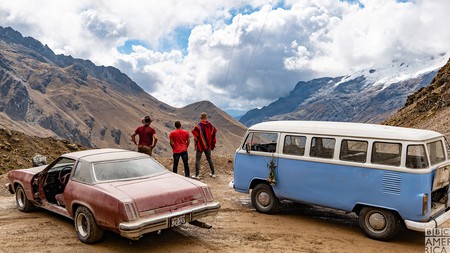 In the last series, the 'Top Gear' team risked life and limb in Peru | © BBC America

The Top Gear presenters have travelled all around the world, often getting themselves into some seriously sticky situations. Culture Trip narrows down the top 10 most extreme driving locations they have ever had to face on the show.

Everyone loves a Top Gear special. It gives petrolheads as well as viewers who don’t care much about cars the chance to watch some hilarious halfwits drive through incredible locations across the globe.

Over the years, we’ve seen different presenters ride motorbikes across Thailand, get chased out of gas stations by hillbillies in the US – and even fire a rocket-powered Mini off a ski jump. A lot of the time, they are competing in challenges and arguing among each other; but sometimes they come up against punishing environments that push their cars to the limit – even putting the presenters’ lives on the line. Here are some of the most extreme examples. 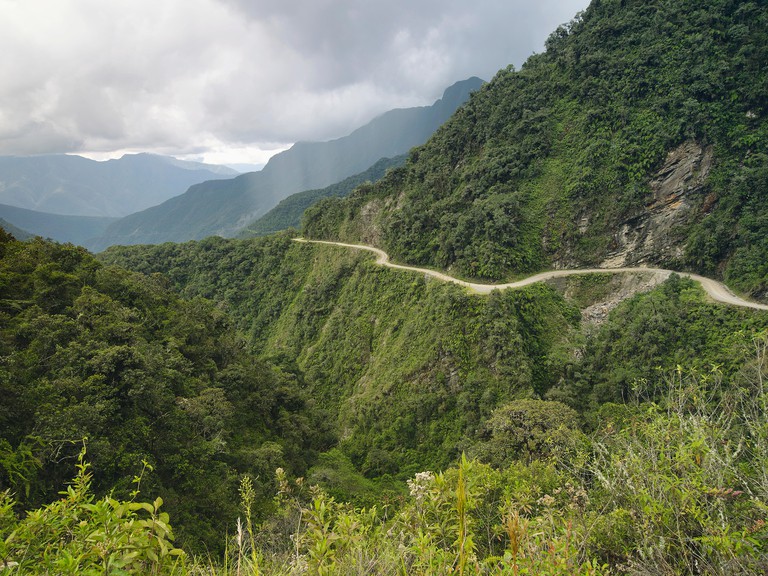 © dani3315 / Alamy Stock Photo
This epic 1,600km (1,000mi) road trip took Jeremy Clarkson, Richard Hammond and James May from the Amazon Rainforest to the Pacific Ocean in second-hand 4x4s. It was extreme enough that the trio had to drive through rainforest, across an active volcano on the Guallatiri Road and down enormous sand dunes – but the scariest moment came when they had to cross the Andes on the Yungas Road – aka Death Road. “God almighty, this is high,” Clarkson says, as he looks over the steep cliff edge. With lorries zooming past and dust blowing up into their windscreen killing the visibility, it made this already extreme feat even more ludicrous. Being “inches from death”, as Hammond put it, the stress got too much for May when Clarkson “accidentally” slammed into the back of him – who pulled out a machete, got out of the car and stormed towards him. “James is killing Jeremy, things are going well,” says Hammond. There is one point along the road where Clarkson is in genuine fear for his life when he has to pass another car by going around it, and the rocky cliff road beneath him begins to crumble. Death Road very nearly earns its stripes. 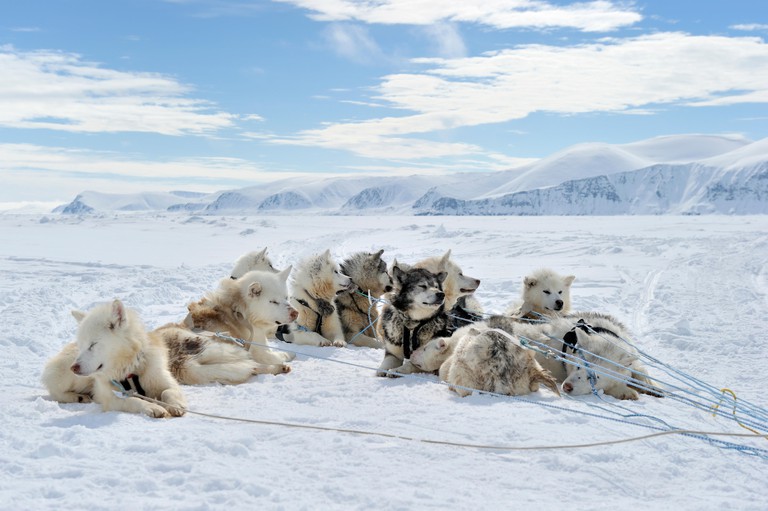 © André Gilden / Alamy Stock Photo
Journeying 724km (450mi) from Resolute in the Canadian Far North to the magnetic North Pole, Clarkson and May, in a Toyota Hilux, race Hammond on a dog sled. “I think we’re all going to die,” says May cheerily as they set off in freezing temperatures across some of the toughest terrain on earth. The 4×4 constantly gets stuck in the snow along the way, and at one point the truck nearly falls through the thin ice. The jagged ice rips the tyres and smashes the chassis to pieces. Hammond has a slight issue during an encounter with a polar bear. The car does eventually make it, and they rejoice that their extreme road trip comes to an end. “It had taken three days of almost non-stop driving,” says Clarkson, “but this incredible machine had breached what the experts had said would be an impregnable wall. It had taken on the impossible… and it had won.” 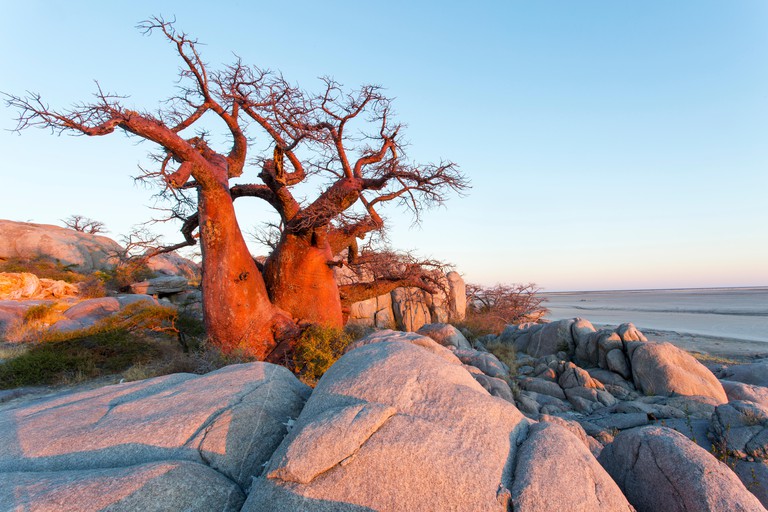 © Danita Delimont / Alamy Stock Photo
The original Top Gear trio set out to do something never achieved before: cross the Botswana Makgadikgadi Pan salt flats by car. “If you run out of water, you will die. If your car breaks down and you can’t be rescued, you will die. If you run out of food, you will die. If you have thin tyres you will break through the crust, get stuck and you will die,” Clarkson says as he reads out the briefing. The desolate wasteland threw a dust storm at them, and the cars kept getting stuck in “prehistoric gunk”. They then crossed the lion-, scorpion-, snake- and dreaded honey badger- infested Okavango Delta and through a river – which nearly destroyed Hammond’s car – to the Namibian border. As dangerous as the journey was, it did make Hammond fall in love with Oliver, his Opel Kadett. 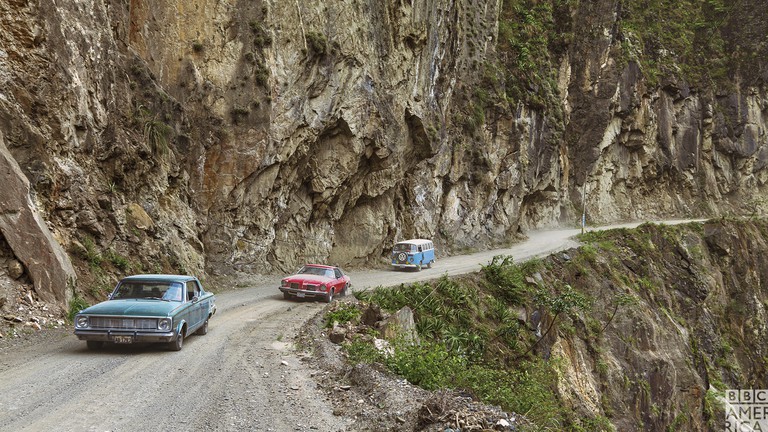 © BBC America
Paddy McGuinness, Freddie Flintoff and Chris Harris set off from the Plaza de Armas on a high-altitude mountain expedition across the Peruvian Andes in second-hand cars to explore the first roads built in the Americas. After exploring Cusco City, which was once the capital of the Inca Empire, the trio headed up the Vilcabamba mountain range towards the Abra Yanama Pass which is (4,654m) 15,269ft above sea level – higher than any road in Europe or North America. It is “one of the most dangerous roads in the world”, Harris tells the other two. Bumps in the narrow roads and rubbly rocky surfaces cause serious issues for the three American cars; so much so that Harris’s Dodge Dart breaks down, unable to finish the climb to the top. “It feels like we are in the gods,” he says from the passenger seat of Paddy’s Oldsmobile Cutlass as the road elevates into the clouds. If you’re going to try this one yourself, we wouldn’t recommend taking a secondhand car. 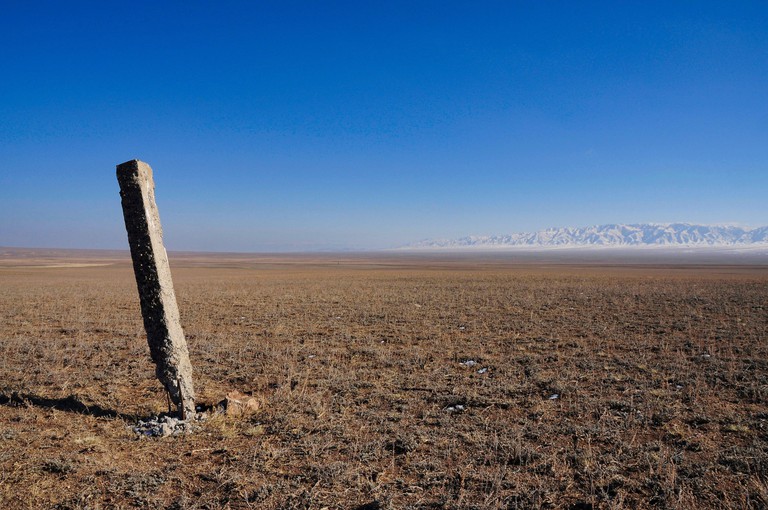 © David Thomas / Alamy Stock Photo
Matt LeBlanc, Rory Reid and Chris Harris take on the Steppe in Kazakhstan, a vast desert of unforgiving terrain and ferocious temperatures. Starting in the city of Turkistan, the trio drive towards the Baikonur Cosmodrome, the world’s largest base launch facility and home of the Russian space programme. The Mercedes saloon, Volvo estate and London taxi, all of which had done at least 772485km (480,000mi) each – the equivalent distance of going to the moon and back – set off. “In the Arctic Circle, a reliable car is the difference between life and death,” says Harris. While driving through the country, Reid notices, “It’s just acres and acres of nothing. It’s like Stoke.” The boys race their cars in an abandoned quarry, then, somewhere within the vast emptiness that surrounds the Baikonur Cosmodrome, the guys come to the end of the road and continue their trip across a dried-up salt lake, until they reach the space station. 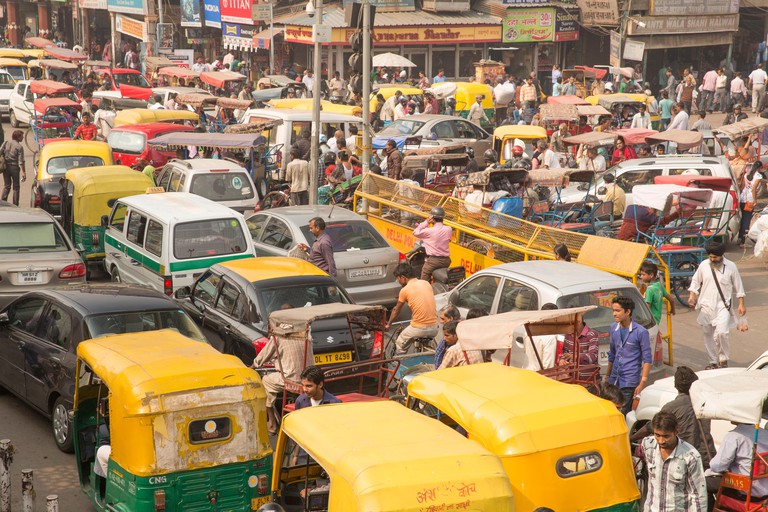 © Prisma by Dukas Presseagentur GmbH / Alamy Stock Photo
This whole road trip is about as extreme as it gets. First, although it may not sound too intense initially, Clarkson, Hammond and May headed along a dual carriageway towards the Indian capital, Delhi, during night and day. “Throughout India there are now 74m vehicles, roughly twice what we have in the UK – so you’d expect the death rate to be twice as high,” says Clarkson. “It isn’t. Last year, it was 196,000 – that’s 22 an hour.” Driving at night, the cars had to squeeze between lorries, swerve out of the way of pedestrians, avoid speeding vehicles and navigate lanes that suddenly ended. They realised it’s not much better in the daylight either, “Only now, we could see what was going to kill us,” says Hammond. In the same road trip, they also drove across the Shipki La pass in the Himachal Pradesh, 5,669m (18,599ft) above sea level, and ventured into Pakistan to drive along one of the most infamous roads in the country – the Fairy Meadows. The trail is a high-mountain track, stretching around 16km (10mi) and reaching an altitude of 3,292m (10,800ft). 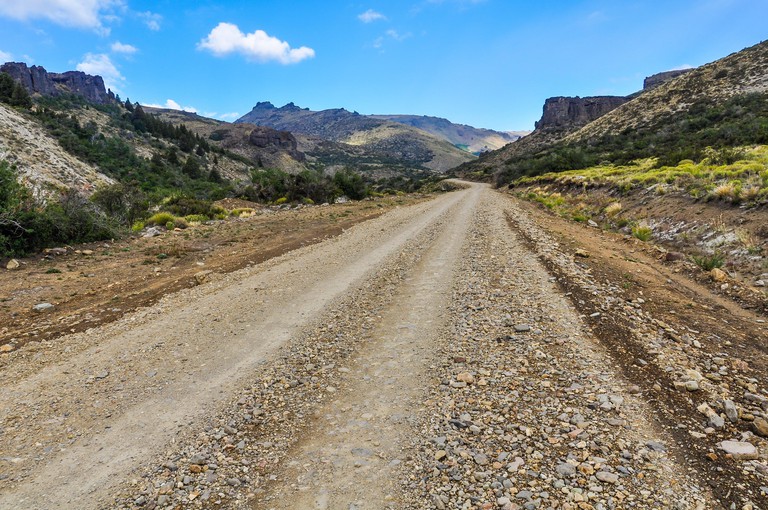 © agefotostock / Alamy Stock Photo
It wasn’t just the natural conditions that were extreme here – although they were still incredibly challenging. Clarkson, Hammond and May drove from Bariloche to Ushuaia. Their route to Ushuaia saw the trio encounter disappearing roads, unstable bridges that they had to cross, thick swamps that bogged them down, extremely rocky terrain that damaged their cars and heavy snow, all of which made their vehicles break down over and over again. Things got dangerous when they found protesters waiting at their hotel. Locals were offended by the number plate on Jeremy’s Porsche, H982 FKL, believing it was a reference to the 1982 Falklands War. The presenters and film crew were all ordered to leave Tierra del Fuego immediately by police. As they tried to leave, near the town of Tolhuin, a large mob blocked the road and protesters started egging the cars, then shattering the windows with rocks. Receiving news that an even larger mob awaited them in Río Grande, the entire convoy fled cross-country towards Chile. Clarkson described the incident as “the most terrifying thing I’ve ever been involved in”. So if you are planning on taking this road trip, as well as using a suitable car, make sure the number plate isn’t provocative. 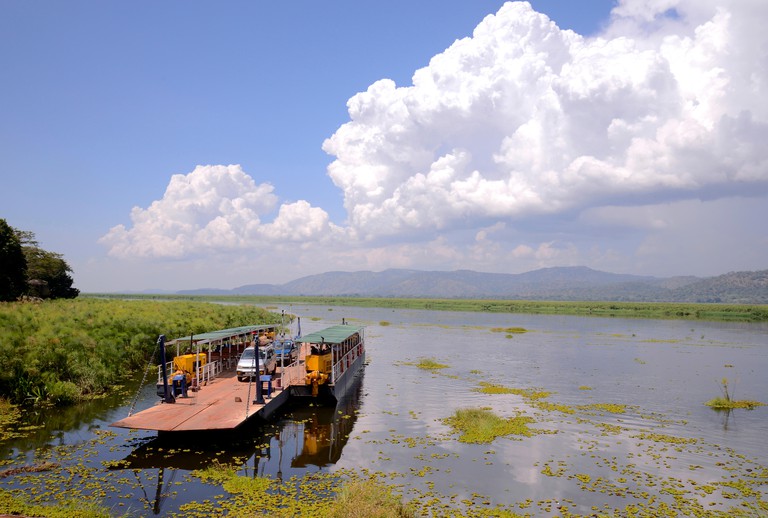 © Friedrich von Hörsten / Alamy Stock Photo
Some say the source of the Nile has already been discovered – but not Clarkson and co, who believed the longest river in the world’s starting point could be found elsewhere. They started in Uganda, drove their second-hand estates through Rwanda and Burundi, then searched through Tanzania and the Serengeti to find… a puddle. Heavy storms meant the cars were relentlessly stuck in the mud while enormous branches fell from above, one smashing Clarkson’s windscreen. Alongside having to make a raft to cross a wide river, the cars had to go off-road to find the actual source of the river. Their trip eventually came to a conclusion when May supposedly found it in a tiny little puddle. “That is the route of civilisation that nourished the ancient Egyptians,” he says. 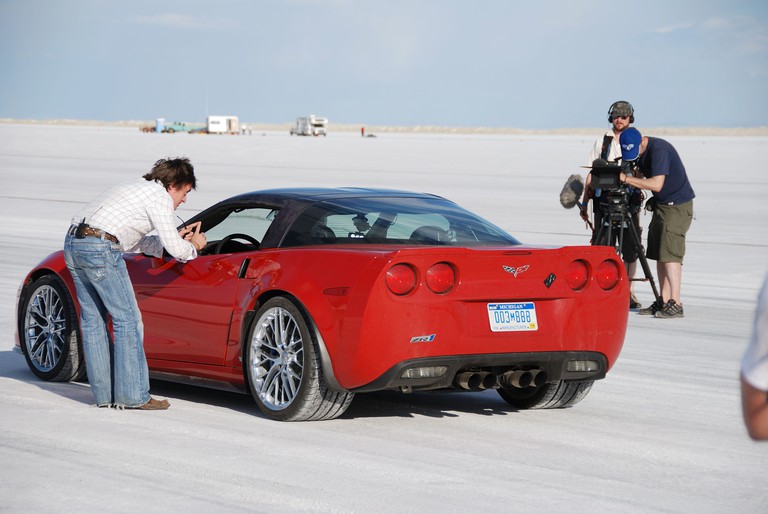 © WENN Rights Ltd / Alamy Stock Photo
In American muscle cars, Clarkson, Hammond and May set off from San Francisco and drive their Cadillac CTS-V, Chevrolet Corvette ZR1 and Dodge Challenger across California, through Nevada and into Utah to race their cars as fast as they can on the Bonneville Salt Flats, and compete in the speed week drag races. Along the way, the guys drive along “the loneliest road in America”, stretching across Nevada and passing nothing of interest on the way. Eventually, though, they make it to the Salt Flats. Bonneville has become the place where speed demons and petrolheads gather, attempting to break speed records, or simply just for the thrill. The 12,141ha (30,000-acre) plain, formed when the ancient lake dried up, is so vast and flat that the curvature of the earth can be seen. Clarkson describes getting “salt fever” as the guys soar across the plains. 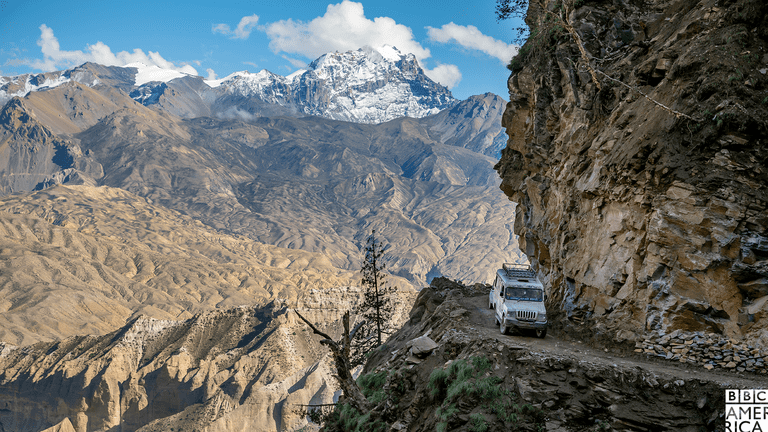 A deadly mountain pass in Nepal | © BBC America
Paddy, Freddie and Chris set out on one of the most challenging road trips Top Gear has ever produced: a high-altitude voyage from Kathmandu – the capital of Nepal – to the Forbidden City of Lo Manthang – a secretive kingdom perched high on the Tibetan plateau on the far side of the Himalayas. The route took them across the Prithvi Highway, one of the busiest roads in Nepal. “Look at the road – it’s bonkers! They’re lethal. Dear God, this is crazy,” says Paddy. Huge trucks – known locally as the “messengers of death” – speed past. “Despite the obvious dangers, the traffic never stops fighting for position on a road that barely clings to the hillside for over a hundred torturous miles,” says Flintoff. Not only that, but they also drive across a terrifyingly high dirt track known as the “deadly mountain path”. Freddie says: “I know it’s normally all fun and a laugh, but this is proper. One mistake and we’re gone.” Deep gorges, harsh terrain, fierce river crossings and oozing mudslides are also part of the five-day adventure they undertook in an old Peugeot, a worn-out Renault and Nepal’s first (and only) home-built car. “For the first time in my working life, I just want to send my kids a message. I’m scared,” says Harris when crossing the deadly mountain path.