Through Merseybeat, to the city’s take on punk, to “Madchester,” we give you our pick of the top ten bands from Manchester from the ’60s onwards. 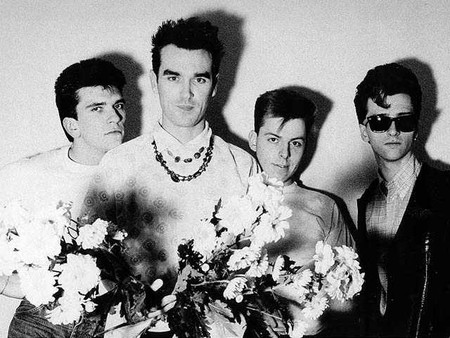 ‘Oh Manchester, so much to answer for’, sang Morrissey on ‘Suffer Little Children’, the first song he and Johnny Marr penned for The Smiths, a chilling elegy to the victims of the Moors Murders. The Smiths began with a song that was an apology for Manchester’s past, but they wrote about the boredom and despair felt by teenagers everywhere in the marginal towns of the British isles, in Dundee, Dublin, Humberside; the loneliness, the dislocation, the desperation, the political frustration, the literary and artistic pretensions of the educated outsider in Britain. The Smiths tapped into an existential angst already charted by Joy Division, but combined it with a kitsch investigation of the everyday, in the language of Salford-born Shelagh Delaney’s kitchen-sink dramas, and in Morrissey’s own indistinguishable hyperbole. ‘Lying in my bed/ I think about life and I think about death/ And neither one particularly appeals to me’ goes a line in ‘Nowhere Fast’, and it’s this despair combined with an ironic detachment and self-effacement that made the Smiths so special to so many. 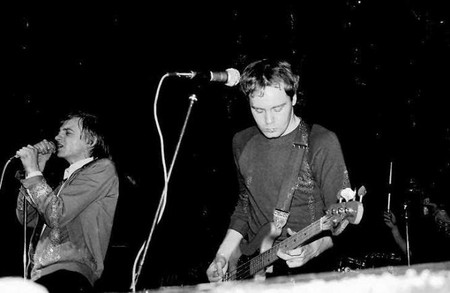 Elliptic lyrics, snarling delivery, a wilful avoidance of melody, and lo-fi, cluttered, half-attempts of rock ’n’ roll; John Peel favourites The Fall, over their nearly 40-year long career, have combined a bitter Northern bile with a continuing aversion of the mainstream.‘The Fall’ itself is a hard thing to place: the band has a constantly revolving lineup around single mainstay Mark E. Smith (as Smith once infamously put it, ‘If it’s me and yer granny on bongos, it’s the Fall’). The Fall’s 31 studio albums, along with the bootlegs, live recordings and singles scattered around, make for a daunting body of material for a new listener to approach; Hex Enduction Hour and This Nation’s Saving Grace are often seen as the band’s masterworks, but are as similarly disjointed and impenetrable as all their unique and indescribable work.

Recommended Song: ‘The N.W.R.A.’ (The North Will Rise Again)

Recommended Album: Grotesque (After the Gramme)

The Hollies’ ‘Bus Stop’ is a near-perfect track, centred around a romance that arises out of rain in August, waiting for buses, coming back from the shops, and a queue – all the banalities of life around the small towns just outside Manchester that The Smiths and Oasis would be describing decades later. Underneath the track’s light subject matter, there’s a sinister tone to the song while the protagonist tells the listener that ‘someday my name and hers are going to be the same’, and the listener can’t help but feel that there is a hidden domestic struggle at the heart of the narrative beyond the public realm of the bus stop. Though The Hollies retained an emphasis on commercial pop and singles while The Beatles, The Rolling Stones and The Who moved towards psychedelia and albums, this hidden conflict underneath the sheen of The Hollies’ perfect three-part harmonies makes them an essential pop group of the era. 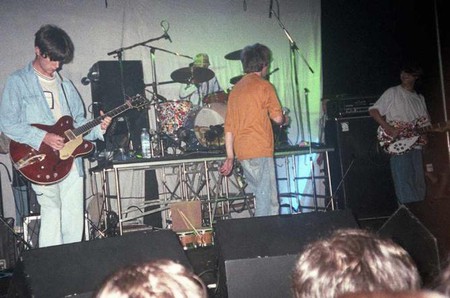 When Ian Brown claimed on The Stone Roses’ self-titled debut record, ‘I am the resurrection and I am the light’, many American critics for a number of years were doubtful about these claims to greatness. The ‘Madchester’ scene, centred around rave culture, seemed fleeting and derivative to many, with Robert Christgau asking, ‘What do [the Stone Roses] do that the Byrds or Buffalo Springfield didn’t do better in 1967?’. These critics missed the importance of a band that married guitar rock with the grooves psychedelia and dance music, singles such as ‘Elephant Stone’, ‘Begging You’, ‘One Love’ and ‘Fools Gold’ relying heavily upon percussion for a groove that imitative bands since have lost. Bands such as Oasis’ style can be heard in the guitars of the Stone Roses, a sound that crops up in so many Manchester bands today, but the drawn-out grooves the Stone Roses indulged in were lost with the bands of this era, and the Stone Roses stand high as the best of the lot. 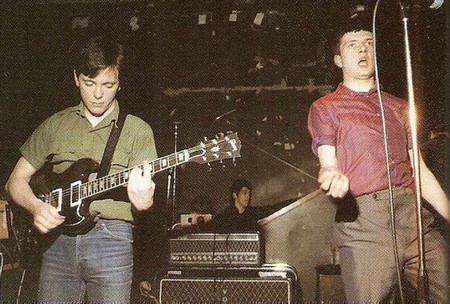 For the final track of Remain in Light, ‘The Overload’, Talking Heads wrote a song inspired by reviews of Joy Division without having ever heard the band. It’s easy to imagine Joy Division purely in terms of the certain set of adjectives Talking Heads would have inevitably read, ‘bleak’, ‘desolate’, ‘haunting’, ‘stark’, etc.; Joy Division can only now be viewed in the aftermath of Ian Curtis’ suicide in 1980, and no listener to their music can be separated any longer from the dramatic irony of knowing what was to happen to the singer. Though there’s a temptation to listen to Joy Division purely as a document of the mind of a man in the throes of depression, it’s easy to forget that Curtis was also a fantastic, mesmerising performer, and that Joy Division’s two albums are stripped-down, inventive rock albums that inspired alternative rock for decades to follow. 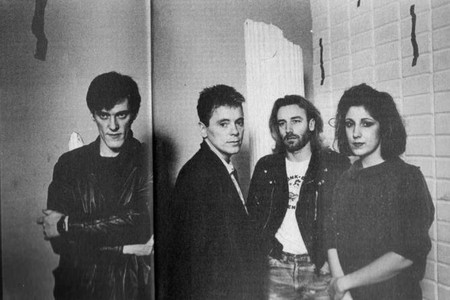 It’s important that New Order follow on in this list; New Order are inevitably and unfortunately bound with Joy Division, being made up of that band’s surviving members post-Ian Curtis’ death. Surprisingly, New Order didn’t have to make a complete break with their former band’s heritage to be able to achieve as worthy successors to the uncomfortable legacy of Joy Division. Through their catalogue, there’s often the unsettled guitars and dark lyrics they had with Curtis, but by appointing Bernard Sumner as their frontman and vocalist, with his often regular, unemotional, unstriking voice, the band allow the focus to move away from its singer to the rest of the band. Yet the most impressive feat of New Order is their incorporation of New York underground dance music into this sound, most recognisably in the still-fresh ‘Blue Monday’, 7 minutes long and throbbing at every turn it makes. 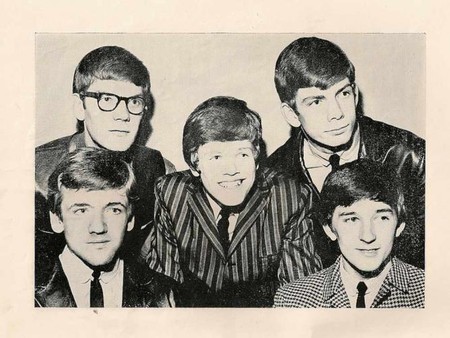 While other British bands finding success in America in the 60s replicated the sounds and style of American artists such as Buddy Holly and The Everly Brothers, Herman’s Hermits, formed in Urmston in 1963, enamoured themselves uniquely to an American audience with their undisguised working-class English accents, and their unique experimentation with traditional styles. After their first hit ‘I’m Into Something Good’, Herman’s Hermits turned away from the enormously successful sounds of the Beatles and Stones to occupy a space of their own, tampering with such diverse styles as music hall and vaudeville, such as in their cover of Harry Champion’s 1910 song ‘I’m Henery the Eighth, I Am’. The band, whose output paved the way for whimsical traditionalist such as the Kinks through the rest of the ‘60s, gained undisputed recognition among their peers for a stubborn refusal to ever sound like anyone else. 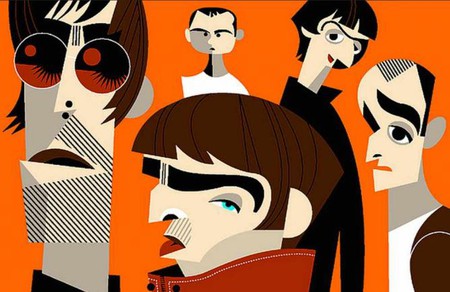 Oasis might have never made as good albums as their first two, Definitely Maybe and What’s The Story (Morning Glory), and if that’s the case, it’s probably to do with the Gallagher brothers’ roots in the Manchester suburb of Burnage, a town, as Noel has described it, ‘where [nothing] happens – it’s one pub and a chippie and a bookie and that’s it’. Definitely Maybe is tied between the bands’ seemingly unrealisable aspirations – ‘Rock ’N’ Roll Star’, ‘Live Forever’, ‘Supersonic’ – and a more banal reality – ‘Married With Children’ – and the Gallaghers’ outsized swagger came to represent a larger working-class escapist fantasy. By the time of third album Be Here Now, after the enormous success of Morning Glory, this story of struggle had disappeared with a band who had actually grown bigger than even they believed they could and were overshadowed by their hits. For a time, though, Oasis were truly emblematic of the struggle in Britain’s industrial regions between the individualistic aspirational politics of the Conservative governments of the ‘80s and early ‘90s, and a harsher reality that faced the majority of working people. 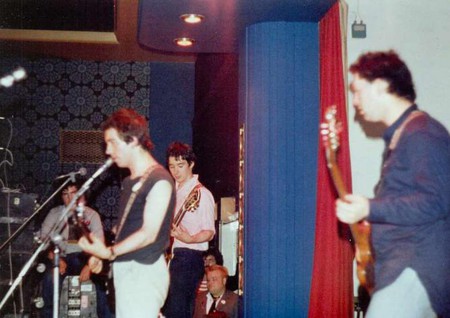 The DIY aesthetic of many punk bands was bound not to hold up as well over time, separated from punk’s immediate social context. While so many punk bands will have been forgotten due to lacklustre songwriting, Buzzcocks’ longevity lies in their expert use of melody in punk-rock, their blending of punk and pop that took the form and structure of pop and gave it the frenetic energy of the alternative subcultures that came into the mainstream at the end of the ‘70s. Their most famous hit, ‘Ever Fallen In Love (With Someone You Shouldn’t’ve)’, separates punk from its wider political frustrations and ties it to a personal anxiety that The Smiths and The Cure would draw on in the next decade. The nature of punk-pop seems hypocritical at times; pure punk demands a complete withdrawal from and antagonism towards to commercialism, while pure pop demands a complete submission to popular consensus. The compromise demands a skill above what the likes of Green Day and Good Charlotte have done more recently, and these acts are just reminders of how Buzzcocks managed to cross these boundaries so masterfully.

Recommended Song: ‘Why Can’t I Touch It?’ 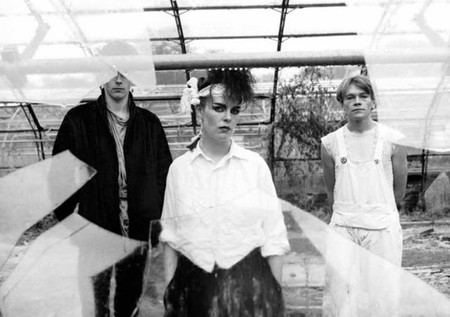 Ludus will almost certainly be the least well-known in this list, but the art-rock experimentation of these Morrissey favourites is as sharp, dynamic, nuanced and edgy as any of the formerly mentioned. Linder, a visual artist who may be best known as the subject of Smiths songs as ‘Cemetry Gates’, but also was involved in many of the bands of the Manchester post-punk scene (and pioneered the raw-meat-dress years before Lady Gaga), formed Ludus in 1978, a permanently underground band despite Morrissey’s best efforts to make them heard. The Seduction particularly is a fantastic document of the band’s penchant for unusual song structures, sudden about-turns, biting feminist narratives, and jazz-based interludes. Ludus are unlikely to go down in rock history, but Linder’s deep Nico-esque voice and the band’s layered and intricate instrumentals tell the story of a part of a Manchester art-rock scene in the late ‘70s and early ‘80s that had talent in spades.

Recommended Song: ‘My Cherry is in Sherry’