The Secret Behind Ed Sheeran's 'Game of Thrones' Song 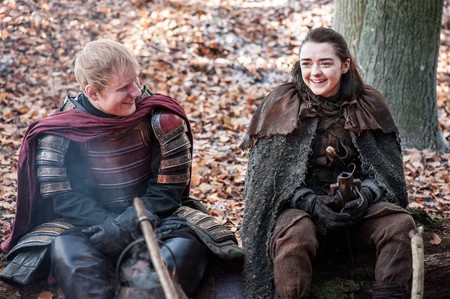 If you watched the Game of Thrones Season 7 premiere on Sunday evening, you saw Ed Sheeran’s cameo, and you’ve probably got a strong opinion about it.

For those who have yet to watch the episode, spoilers ahead!

We’ve known the “Shape of You” artist would appear in the upcoming season since creators D.B. Weiss and David Benioff spilled the beans at SXSW in March, explaining that it was planned in order to surprise actress Maise Williams (Arya Stark), who is a huge fan of Sheeran’s music. However, we didn’t know that it would come so soon, and that it would include a little ditty.

Now, whether you loved hearing his angel-voiced cameo, or you suddenly felt like the episode, and the whole series, really, was just an elaborate advertisement to increase the music sales of the singer-songwriter named Ed Sheeran, there’s actually some fun GoT knowledge hidden in the scene.

Posing as a Lannister soldier, Sheeran is seated around a campfire in the woods along with the rest of his platoon, and, naturally, before we see him, we can hear him.

Titled “Hands of Gold,” Sheeran’s song are actually lyrics taken from George RR Martin’s third book in the series, A Storm of Swords. In the novel, the lyrics are written by a character named Symon Silver Tongue, who found out about Tyrion Lannister’s secret relationship with Shae. Symon attempts to blackmail Tyrion, but it ends up backfiring and Tyrion has him killed.

He rode through the streets of the city,
Down from his hill on high,
O’er the wynds and the steps and the cobbles,
He rode to a woman’s sigh.
For she was his secret treasure,
She was his shame and his bliss.
And a chain and a keep are nothing,
Compared to a woman’s kiss
For hands of gold are always cold,
But a woman’s hands are warm

Game of Thrones composer Ramin Djawadi spoke with Billboard, explaining how his music had to rise this season now that there are dragons “the size of 747s,” as well as his part in Sheeran’s appearance.

“It’s pretty cool. He sings a piece that I wrote with lyrics that came from the book,” Djawadi said. “It was kind of like [season 3’s ‘The Bear And The] Maiden Fair,’ where I went in and wrote melodies for lyrics from the book. Ed sings those lyrics and he’s great.”

In the book, Tyrion even recites the last two lines when he is strangling Shae to death.

However, now that Jaime Lannister has a literal hand of gold, and is engaged in a not-so-secret secret relationship with his sister Cersei, the song could just as well apply to him as it does Tyrion.

Sheeran is far from the first musical cameo on GoT, artists such as Gary Lightbody of Snow Patrol, Will Champion of Coldplay, Sigur Rós, and Mastodon each making a prior on-screen appearance.