The Oldest Rugby Clubs In The World

The legend goes that William Webb Ellis picked up the ball during a game of football at Rugby School in 1823, and football and rugby were split from then on.

It took a few years for the sport to spread – often from the school itself – but gradually clubs began popping up, looking for opposition to play. The first of those are listed here, with our rundown of the oldest rugby clubs in the game.

The foundation date of Guy’s Hospital Rugby Club in 1843 is accepted by both the Rugby Football Union and the Guinness Book of Records, making Guy’s officially the oldest rugby club in the world. The date of 1843 is based on evidence predominantly in the form of a card outlining the club’s fixtures in their 40th season from 1883-84. Other clubs — all listed below (sorry, Trinity, Barnes and Blackheath, in particular) — also lay claim to being the oldest, but lack the same evidence.

The Cambridge University Rugby Union Football Club (CURUFC) was officially founded in 1872, but it was an evolution of the side created by Albert Pell (from Rugby School) and Edgar Montague (from Shrewsbury) in 1846. Pell was an Old Rugbeian and his new rugby side challenged Old Etonians to game, where a disagreement with the use of hands led to the Cambridge Rules being drawn up. More recently, the Cambridge side has been a good place to pick up careers, with the likes of professionals Joe Ansbro and David Quinlan benefitting from playing there. 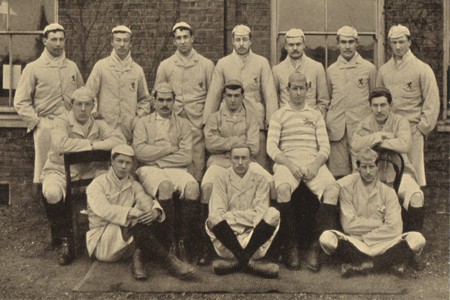 This famous school from the northeast has produced a number of international rugby players, including a couple of British Lions in Noel Forbes Humphreys and Mike Weston. Founded in 1850, it played a large part in helping the development of the game through the end of the 19th century; even the Barbarians played against them in 1897 (in an 18-5 win for the Baa Baas). Premiership side Newcastle Falcons, via their time as Gosforth, were originally the Durham old boy’s team and used to wear the same green and white hoops.

Safe to say, it was a surprise to see a German club pop up researching this. In the mid-19th century, a number of affluent British students attended private schools in Germany, bringing the early incarnations of rugby to the country. Neuenheim College, or Heidelberg College as it’s now known, was one of these schools and was playing as a rugby club from 1850. However, “In the build up towards the World War II the Nazi party did not like rugby, as it was considered as ‘too English’ and the game ended up losing any financial backing that it originally had.”

George Cotton came to the school in 1850 from Rugby when Marlborough was heavily in debt and brought about a change in the school’s fortunes and reputation with the reforms he brought. One of the other things he brought with him was the sport itself, with rugby rules but without hacking. The school has gone on to produce produce 38 full internationals and four England captains, while Cotton went on to become Bishop of Calcutta.

It may not be the oldest, but Trinity College can lay claim to being the oldest rugby team in continuous existence, playing the game nonstop (well, not “nonstop,” per say) since 1854. The DUFC (Dublin University Football Club, as they are now known) 1st XV currently play in Division 1A of the All-Ireland League and has an ongoing rivalry with University College Dublin, playing in the Colours Match annually since 1919. UCD leads Trinity 38-22-4 in the all-time series. 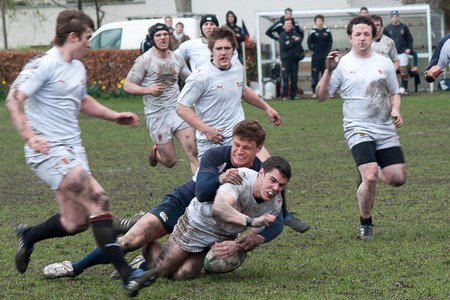 As seems to be the case with so many of these institutions, it took old boys from Rugby to initiate the game by the Mersey. They challenged locals to a game in 1857, Liverpool Football Club was formed and the game grew from there. The club is now known as Liverpool St Helens Football Club, although it shouldn’t be confused with Liverpool FC (soccer) or St Helen’s RFC (rugby league).

According to their own website, “The club’s name omits ‘rugby’ from its title as its formation predates the split in rugby and association rules which occurred in the 1860s. The club was formed in 1857 and was only open to former pupils of the Edinburgh Academy ‘or those with an association.'” The first rugby game ever recorded was described as, “A game of a primitive kind … the most cruel hacking with iron-toed and heeled boots was allowed and suffered in the muddle … the ball was composed of a raw bladder, fresh from the butcher’s hands and enclosed in a leather case.” The Edinburgh Academicals’ ground at Raeburn Place even hosted the first Calcutta Cup match between England and Scotland in 1879.

“In 1858 the Blackheath Football Club was founded by some of the old boys of the school as an open club, and so was born the first rugby club in the world without restricted membership,” so says Blackheath themselves.

“Although there has been controversy over the actual year of foundation, the only real doubt that emerges from the confusing records of those early years is that, if Blackheath FC was not founded in 1858, it was born even earlier and the club is even older — to paraphrase the late A.C. Shanahan, one time rugby correspondent.” But, as we’ll see with Barnes (below), evidence is everything.

Credited as being started by the exceptionally named Ebenezer Cobb Morley (who also helped set up the FA and Barnes and Mortlake Regatta) in 1858, according to local historians the club was playing games as early as 1839. The year 1858 is the date the club was officially formed, and 1862 is the date given for their first official match (in what sounds like a humdinger of a 0-0 draw with Richmond). Barnes has a serious case for being the oldest of them all as it appears it was playing games long before the club was formed, but without any actual evidence it’s difficult to justify it’s place at the top.