The Lake District: An Inspiration For Writers

The Western Lake District has long been a place of inspiration and has had a considerable impact on the rich cultural offerings of Cumbria. Below, we list the some of the great writers (and artists) that were inspired by the Lakes. 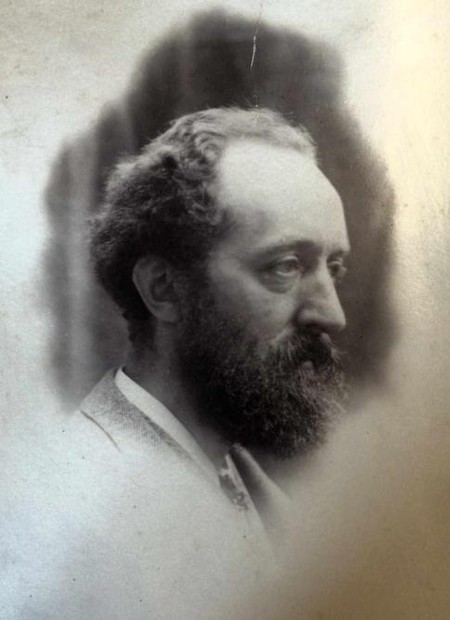 The first is a chap called Charles Lutwidge Dodgson; perhaps you may know him as Lewis Carroll, author of the famous tale of Alice in Wonderland? The Lutwidge family, owners of Holmrook Hall (now sadly demolished), made their fortunes in the tobacco trade between Virginia and Whitehaven. If you look closely, you can still find traces of the family ties close by. If you pay a visit to Irton Church, you will find the grave of Carroll’s great uncle Admiral Skeffington Ludwidge, who was himself of some importance. Skeffington mounted a small Arctic expedition in 1773 to find a north-east passage to the South Seas with perhaps one of the nation’s greatest heroes on-board as a young midshipman – one Horatio Nelson. However, it was Carroll’s uncle, Charles Skeffington Lutwidge, who resided at Holmrook during the 1870s, when Carroll was a frequent visitor. On one such visit Carroll recorded in his diaries that he had made a very long and costly visit after having trudged the fells over Great Gable to reach Holmrook. 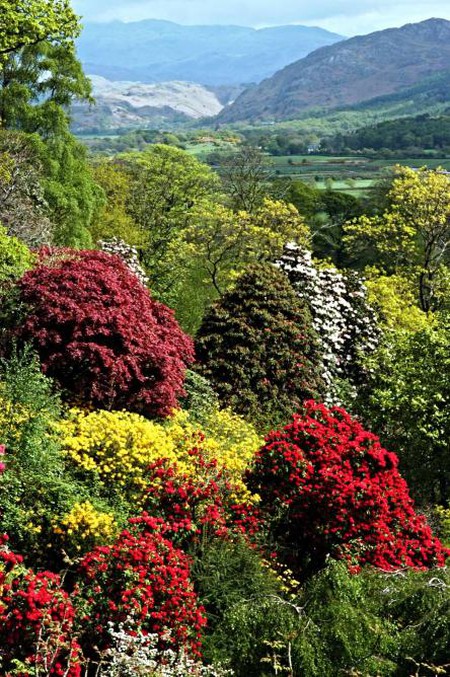 Another is John Ruskin; although born in London, he made his first visit to Keswick in 1824 when he was only five years old. This event clearly made a lasting impression on the young lad, as later in life Ruskin described his first visit to Friar’s Crag in 1824 as: ‘the creation of the world for me.’ Ruskin was a frequent visitor to the Lakes throughout his life, eventually settling himself in Brantwood, his home on the shores of Coniston Water. Ruskin spent time deep in the Western Lakes visiting Calder Abbey, Wastwater and Muncaster Castle. He described the view of Eskdale from the castle’s Terrace Walk as ‘The Gateway to Paradise.’ 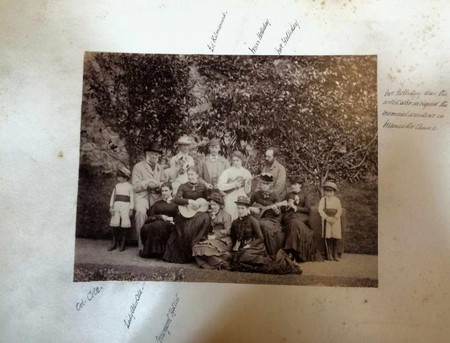 This leads us to an artist, Henry Holiday, who was also born in London, but made an early escape to the Lakes. Holiday showed an early aptitude for art, was given lessons by William Cave Thomas, and attended Leigh’s art academy (where a fellow student was Frederick Walker). In 1855, at the age of 15, he was admitted to the Royal Academy. Through his friendship with Albert Moore and Simeon Solomon he was introduced to the artists Dante Gabriel Rossetti, Edward Burne-Jones, and William Morris of the ‘Pre-Raphaelite Brotherhood,’ a movement proving pivotal in his future artistic life.

In the same year Holiday made his first journey to the Lake District. This was to be the first of many trips to the area, where he would often holiday for long periods of time, on many occasions staying with Ruskin at Brantwood. It was Ruskin who first introduced him to Carroll, with whom he established a firm and lifelong friendship. It’s worth noting that Lewis Carroll commissioned Holiday to illustrate a number of his works including, The Hunting of the Snark, the first edition of Rhyme and Reason and the first edition of Through The Looking Glass. 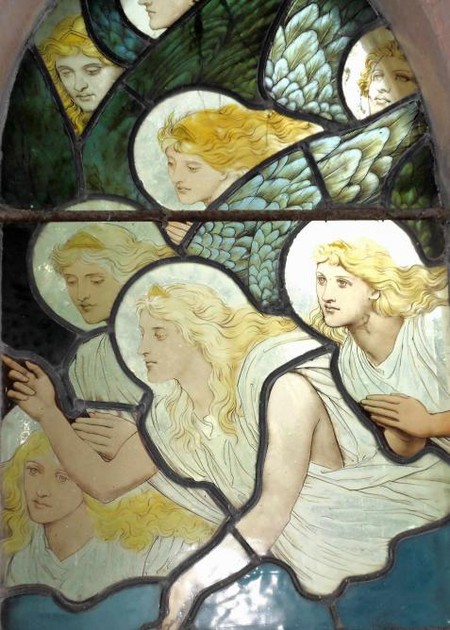 Following Ruskin’s death in 1900, Holiday, his wife Katherine and their daughter Winifred, rented a small cottage nearby. But they longed to build a villa of their own and, in 1907, bought a three-acre plot of land in a natural amphitheatre overlooking the Esthwaite Valley on Hawkshead Hill. Here, they created a miniature Brantwood: a split-level stone and slate house, which they called Betty Fold. Whilst in the Lake District, Holiday spent much of his time sketching the views from vantage points throughout the area. He wrote, ‘I have visited many parts of the World and have revelled in the marvellous beauties to be found in them, but for concentrated loveliness I know nothing that can quite compare with the lakes and mountains of Westmorland, Cumberland and Lancashire.’ 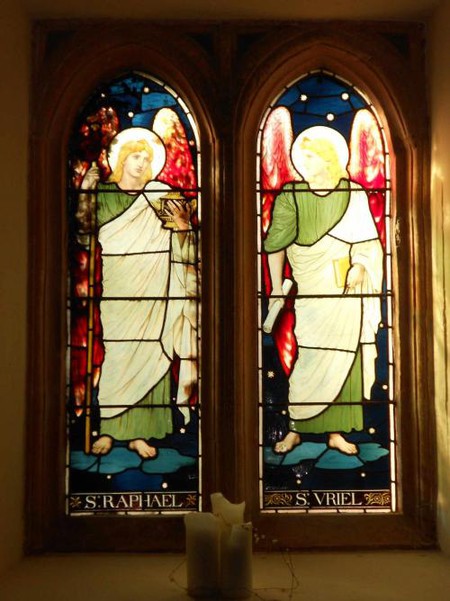 From 1872 onwards, Holiday became a regular visitor to the Western Lakes and in particular to Muncaster Castle. It is here that you will find some particularly fine examples of his renowned stained glass window designs. They sit in the church of St Michael and All Angels. If you take the time to visit this unassuming ancient edifice, you will discover a real treat. There are a number of windows in the church by Holiday, but there are four windows to which you should pay particular attention. This set of four depict archangels Michael, Gabriel, Raphael and Uriel, gloriously arrayed. The four have an interesting yet tragic story linked to Josslyn Pennington, the fifth Muncaster Baron.

The windows are in memory of four of his friends who were killed by brigands in Greece. Lord and Lady Muncaster were captured at the same time as their friends and subsequently released, she with the other ladies, and he as the most likely to be able to raise the ransom. Unfortunately, as he was returning with the ransom, the Greek government, unwilling to be dictated to by brigands, attacked their stronghold at Delissi near Marathon. As a result, the brigands, thinking they had been betrayed, killed their prisoners on April 21st 1870. 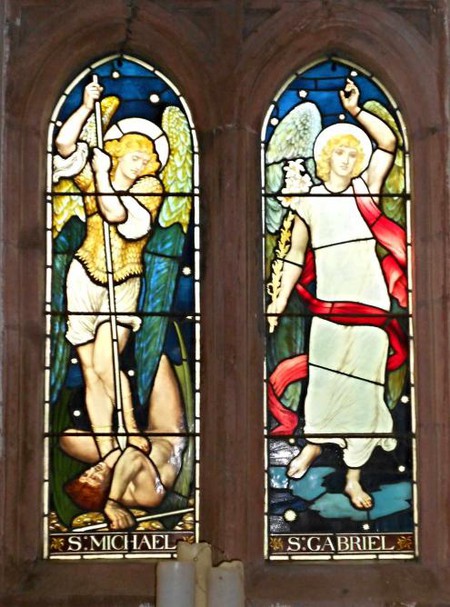 As you can no doubt see, the Western Lake District and Muncaster Castle have played a significant part in the rich cultural offerings of both the region and the UK as a whole, influencing Ruskin and his theories, Carroll and his musings and Holiday and his creative talents. It is also true that many members of the great Pre-Raphaelite Brotherhood in their turn also visited and were influenced by this very special place, including Dante Gabriel Rosetti, William Morris and Burne-Jones to name a few. To this day, Cumbria and the Lake District continue to inspire a great range of artists with notables including Keith Tyson, Andy Goldsworthy, Anthony Gormley, and more recently Laure Provoust and her Schwitters-inspired piece ‘Wantee.’