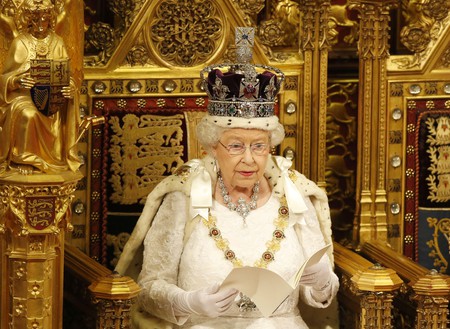 It turns out that being the Queen isn’t all cocktails and corgis.

A new documentary featuring the monarch herself has revealed the trials and tribulations that come from holding such a regal position of power.

She rarely gives interviews and almost never tells personal anecdotes about her time on the throne. But she talks candidly about her time as head of state in an hour-long BBC programme called The Coronation.

The coronation of Queen Elizabeth II as Sovereign of the UK and the Realms took place #onthisday 63 years ago #CoronationDay.

One of her main complaints is that the Imperial State Crown is so heavy she struggles to wear it.

Talking about the moment she was crowned, she jokes that she was unable to look down because the crown, which weighs 1.28kg (2lbs 13oz), made her feel like her ‘neck would break’.

The Queen is shown in conversation with royal commentator Alastair Bruce. The crown, which is worn when delivering the speech during the state opening of parliament, has clearly caused her some consternation over the years.

First look: As a year of 90th birthday celebrations draw to a close, we would like to share this special photo of The Prince and The Queen, taken earlier this year at Windsor Castle. 📸 @nick_knight

She said: ‘Fortunately, my father and I have about the same sort of shaped head. But once you put it on, it stays. I mean, it just remains on.

‘You can’t look down to read the speech, you have to take the speech up. Because if you did your neck would break, it would fall off.

‘So there are some disadvantages to crowns, but otherwise they’re quite important things.’

The Queen arrives by train at Lisahally docks at Londonderry in July 1953, as part of her Coronation Visit to Northern Ireland, her first to the country as Queen. Tomorrow The Queen and The Duke of Edinburgh will travel by rail from Coleraine to Bellerena, as part of a full day of engagements in Northern Ireland, which will include a visit to the Giant's Causeway. Her Majesty will also unveil a memorial to Robert Quigg, who won a Victoria Cross for bravery during the Battle of the Somme. 📷 Raymond White/PA

Who knew that wearing a crown could be so perilous? It was made for George VI’s coronation in 1937, and is set with a breathtaking amount of jewels. It has 2,868 diamonds, hundreds of pearls, 17 sapphires and 11 emeralds. It contains a gemstone called the Black Prince’s Ruby, which is believed to have been worn at the 1415 Battle of Agincourt by Henry V.

She also speaks about the nuisance of riding in a golden carriage and of the heavy ceremonial robes she wore during her coronation.

She was brought to a sudden stop when the robes dragged a lot on the thick pile carpet of Westminster Abbey. The dress she wore was silk embroidered with gold, and silver bullion thread and pearls. The Queen said: ‘Well, I remember one moment when I was going against the pile of the carpet and I couldn’t move at all. . . They hadn’t thought of that.’

The Queen and the Royal Family welcome the world's Ambassadors and High Commissioners from the UK's diplomatic community to Buckingham Palace for the annual Diplomatic Reception.

She perhaps would have a preferred a different form of transport to the golden carriage, which transported her from Buckingham palace to Westminster Abbey. She described the journey as ‘horrible – it’s only sprung on leather, not very comfortable’.

Speaking generally about the coronation, she commented: ‘It’s the sort of, I suppose, the beginning of one’s life really as a sovereign.

‘It is sort of a pageant of chivalry and old-fashioned way of doing things, really. I’ve seen one coronation and been the recipient in the other, which is pretty remarkable.’

Today marks The Queen's #SapphireJubilee It has been 65 years since Her Majesty acceded to the throne. On 6 February 1952, King George VI sadly died following a prolonged illness. Princess Elizabeth immediately acceded to the throne, becoming Queen Elizabeth II and taking on all of the responsibilities which came with her new title. In the photograph, The Queen is wearing a suite of sapphire jewellery given to her by King George VI as a wedding gift in 1947.

Viewers are also treated to some behind-the-scenes footage of a four-year-old Prince Charles and his younger sister Anne playing hide-and-seek underneath the Queen’s long formal robes. ‘Not what they’re meant to do,’ the Queen drily remarked.

The Queen has held her role since the February 6, 1952 when she was crowned aged 25 after her father died at Sandringham in Norfolk.

You can watch The Coronation at 8pm on Sunday, January 14 on BBC One and afterwards on iPlayer.

Curious to know more about the Queen’s life? Check out what she eats during the course of a day.