The Little-Known History Of Brunch And Its Inventor

Have you ever heard of Guy Beringer? If you haven’t, then thank him right away as he is the genius who invented brunch. The inspiration for his dear invention was his own hangover. Beringer, an English author, proposed the concept of this combination meal in his essay—Brunch: A Plea—which he penned in 1895. The essay was written to assist those who nursed hangovers every Sunday morning from the night before. 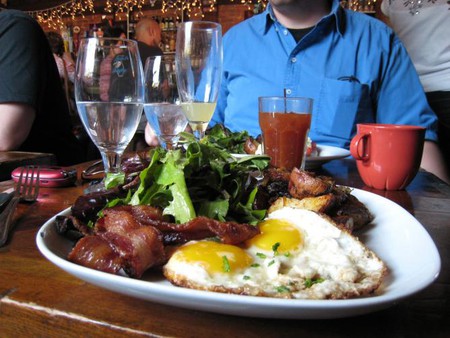 According to Beringer, people who drink heavily on Saturday nights should never encourage themselves to have meaty dishes while they wake up. Rather, they should forgo Sunday’s breakfast and gorge themselves on (if their appetite allows) a hybrid meal during midday. Furthermore, Beringer advocated that brunch should be followed by tea and pastries. Beringer proposed the idea of sharing the meal and previous evening’s hangover tales with your friends. The sharing of brunch and stories makes people satisfied with not only themselves but also their fellow human beings. That’s why the idea of brunch is to be sociable and cheerful.

The primary purpose of a brunch meal was to shake off headaches and give rest to gurgling stomachs before consuming something solid. However, we’ve been enjoying our pancakes with bloody marys ever since. Let’s raise a toast to the hard-drinking Englishman.

Nevertheless, the great invention of Britain didn’t spread like wildfire across the pond and took nearly thirty years to reach the US.

What is ‘blunch’ and how is it different from brunch?

For all those brunch lovers who wish to enrich their vocabulary – When the combination meal is eaten during noon, it is called ‘brunch.’ However, in 1896, one English magazine noted that whenever the meal is eaten close to luncheon, it should be referred to as ‘blunch.’

Where can you find a superb brunch in London?

Now you know the history of brunch, it’s time to indulge in one in London. Certain websites that can give you an exhaustive guide to having the best brunch in London. So, visit a website today and partake in a variety of delectable brunch dishes over the coming weekend.