Sometimes a story is so incredible that a film, no matter how well-intentioned, just can’t do it justice. Does bizarre documentary ‘Ming From Harlem’ measure up to other creature feature movies? Read our review to find out.

In October 2003, Antoine Yates was arrested after making an call to emergency services. When the first responders arrived on the scene, they found Yates had been injured by Ming, his fully grown pet tiger. On further investigation, police found an adult alligator (imaginatively named Al) in a separate room of the large apartment in a block in Harlem.

The film follows Yates as he is driven through his neighbourhood in the back of a yellow cab, just in case you were wondering where the documentary was set. He narrates his story to a camera that is stationed just out side of the passenger side window. There is a tease that we will get to see some archive footage of Ming and Al in their home of 2003, but this is sadly not the case. Instead we are fed news reports from the time, and interviews with Yates as he faced time in prison. The most remarkable thing about this is how Antoine has apparently not aged a day in over a decade. 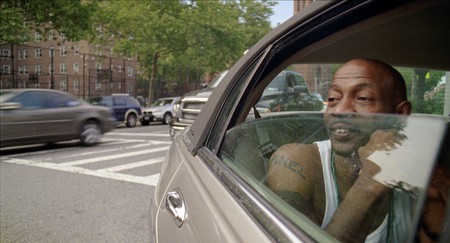 There are big questions that naturally spring to mind from the set-up of the documentary but it doesn’t quite manage to follow through on its early promise. We want to know how and why, but instead we see prolonged sequences of doors and hallways to give us a sense of location. Its a constant preoccupation of director Phillip Warnell, a need to let us know where we are.

What the film is really crying out for is an explanation of how we got here… unfortunately that’s not something that is ever adequately addressed.

While Ming lives up to his superstar billing, poor Al is relegated to a bit-part role. His appearance with only 25 minutes to go, suggests that alligators may well be a more mundane pet to keep in the high-rises of New York. Now, there’s a terrifying thought.

The film does pick-up when we see a tiger (one presumes it is Ming himself) stalking the hallways and domestic rooms of what appears to be an apartment. There is little context given to this, and we’re left to make our own assumptions about where this footage comes from. A short sequences in the credits gives us a bit more to work with, but it still feels like an under-developed strand of the story.

A little research reveals, as I suspected, that the bigger story is the one that should have been told. Yates initially claimed he had been bitten by a pitbull, but medical staff at a local hospital doubted his claims. Later on the same day a police officer attended the scene, only to be startled by a loud growling. Yates’ mother was also arrested as it emerged that she had been baby sitting in the apartment.

Both Al and Ming were rehoused in more suitable accommodation, and Antoine served three months in prison for reckless endangerment. In 2010 he changed his name to Antoine ‘Tigermann’ Yates, and now lives with 22 big cats including four tigers.

That’s the film we really want to see.