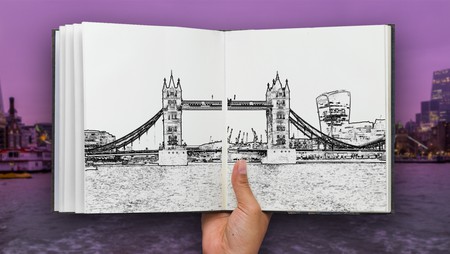 As part of our literary city guide series, we’ve mapped out the literary landmarks, bookstores, writers and books of contemporary London.*

To say that London is a city marked by literature risks understatement. From the urban wit of Thackeray, and the “fog everywhere” darkness of Charles Dickens, all the way to the hysterical realism of Zadie Smith, the city has long been the plaything of some of the world’s most recognizable writers — and it shows. An abundance of atmospheric and specialized bookstores, countless landmarks evoking writers past, and an endless list of required contemporary reads are necessary just to understand the city’s literary landscape. Here’s a good place to begin. 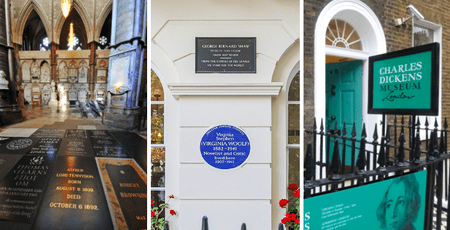 Poet’s Corner
Tucked away in the South Transept of Westminster Abbey, this little corner has grown into a monument dedicated to the numerous poets and writers that had an impact on British arts and letters. Here you will find memorials honoring Charlotte Brontë, Ted Hughes, W.H. Auden, Jane Austen, and most recently Philip Larkin.

Keats House
The house where the Romantic poet John Keats spent his most productive years is now a literary museum dedicated to his work. Located near Hampstead Heath, the Keats House contains artifacts and manuscripts owned by the poet, and hosts several literary events throughout the year.

The Charles Dickens Museum & The Old Curiosity Shop
The only surviving London home of Charles Dickens now houses the writer’s literary archive and museum, featuring over 100,000 items. Renovated in 2012, the Dickens House also serves as an event and exhibition space. A fifteen minute walk away is The Old Curiosity Shop, which serves as the setting for Dickens’ novel of the same name.

Virginia Woolf Tour
Virginia Woolf was a born and bred Londoner, and many of her former residencies and haunts bear plaques in her honor. The Londonist assembled a comprehensive Woolf city tour which will take you from Tavistock Square all the way out to Richmond in the far West of the city.

Dr. Johnson’s House
The great lexicographer Samuel “Dr.” Johnson lived and worked here while he compiled his Dictionary of the English Language. Here you can find his archives, a museum, and a research center dedicated to the ongoing studies of lexicography and etymology. The house also occasionally hosts a free tea time. 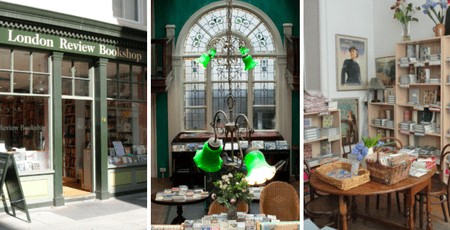 The London Review Bookshop
Affiliated with the great critical journal, the LRB bookshop is one of London’s preeminent literary hubs. Along with being the public front of the LRB, it hosts several events and its cafe is often a meeting point for the city’s intellectuals. While shopping, picking up a copy of the review along with a book is near tradition.

Persephone Books
It’s not often that one comes across a bookshop dedicated solely to women writers, but that is the mission of Persephone Books, also a publisher. Persephone’s books are not only admired for their high quality designs, but also for keeping many female writers of yore in print. Have a look at our Daphne du Maurier list to see what we mean.

Foyles
The largest independent bookstore in Britain is a multi-storied complex filled with thousands of titles. It’s rare not to find what you are looking for here, and patrons often stay long enough to attend the store’s numerous events. Though Foyles lacks the intimacy and personal attention of smaller stores, if you know what you want, go here.

Daunt Books
Another large independent bookshop, Daunt began as a specialist for traveler’s books and has grown to become a wonderment of curation, where patrons are more often introduced to new titles than to familiar ones. Like Persephone, Daunt also publishes its own books, a venture began in 2010.

Henry Pordes Books
This bookstore houses everything from new and ubiquitous titles to rare and obscure ones. With its storefront near London’s small Chinatown, Henry Pordes sees a lot of tourist types as well as a heavy amount of loyal patrons. Its rare books room is a marvel in its own right. 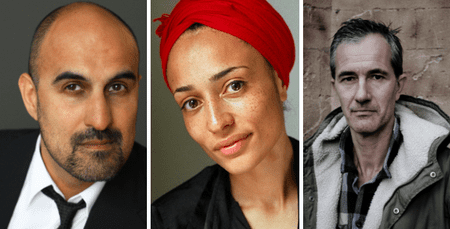 Zadie Smith
Smith got her start as a writer at the early age of 24 with her bestselling novel White Teeth. Later works such as The Autograph Man, On Beauty, NW, and Swing Time have pushed Smith into near-canonization. As a Jamaican-British writer and through gem-cut prose, Smith has imbued her diverse characters examine the commonality between people and the effects of privilege. A master critic and journalist, Smith has also published a book of essays Changing My Mind.

Tariq Ali
A bonafide leftist, Ali has been an influential figure in dissent literature for over fifty years. As a novelist, Ali is most famous for his Islam Quintet — a series of books that utilize fictional characters to tell the story of the long, intense relationship between Islam and Judeo-Christianity. As a political thinker, Ali published several critical works and has written for the New Left Review (of which his wife Susan Watkins is the editor), as well as the London Review of Books. A discussion with John Lennon led the former Beatle to pen the song “Power to the People.”

Hari Kunzru
A journalist by origin, Kunzru turned heads with his award-winning debut The Impressionist in 2002 and has kept heads turned ever since. His novels are populated by extraordinary characters — insurrectionists, powerful CEOs, rockstars — placed into Twilight Zone-like experiences, in such works as My Revolutions and Gods Without Men. The son of an Indian immigrant, Kunzru is a noted literary and immigrant activist, is the deputy president for English PEN and a member of the Refugee Council.

Geoff Dyer
Dyer has carried the torch of English wit since his first novel The Colour of Memory appeared in the 1980s. He is most known for a certain British-style of memoiristic fiction, including Out of Sheer Rage, an account of trying to write a book about D.H. Lawrence and Geoff in Venice, Death in Varanasi, a satire of the Venice Biennale. As a journalist, Dyer has written several articles for places such as Harper’s and the Guardian; his collected essays Otherwise Known As the Human Condition was given a National Book Critics Circle Award.

Maureen Duffy
Duffy is a writer as celebrated for her literary talents as for her LGBT activism. Her prose is often written in Joycean stream-of-consciousness, and novels such as Wounds focus on London’s lower-class and fringe communities. In the early 1960s, Duffy publicly came out in a time when homosexuality was still criminalized, and soon published her novel The Microcosm, set in a lesbian night club. Duffy is also an award-winning poet and playwright and her work has been the subject of several critical analysis. 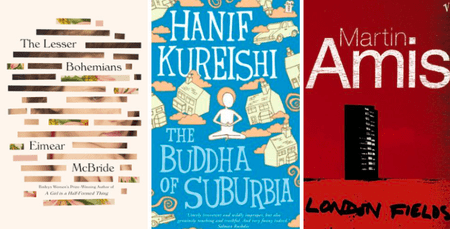 The Lesser Bohemians (2016)
The sophomore novel by Eimear McBride tells the story of a young Dublin girl who has come to London harboring dreams of becoming a stage actress. It is the mid-1990s and McBride’s protagonist is swept up by all the city has to offer, including the advances of a much older and respected colleague. Their passionate romance takes them across a post-Thatcher London, and is narrated in McBride’s trademark vibrant poesy, given the characters an extra bounce of life that dances upon a brink of madness.

The Buddha of Suburbia (2010)
A bildungsroman of the London immigrant experience, Hanif Kureishi’s The Buddha of Suburbia was such a hit that it was adapted into a four-part drama with a soundtrack provided by David Bowie. Set in the late 1970s, it tells the story of Karim, a bi-racial South London suburbanite who dreams of making it big in London town. Karim’s adventures take him to New York and back to London where he becomes a soap opera actor. Central to the book is a portrait of London, its politicians, pop music and free spirit, as they all but opposed the country’s oncoming conservatism.

Saturday (2005)
This great British post-9/11, post-Iraq War novel was written by Ian McEwan and published in 2005. It tells the story of Henry Perowne, a neurosurgeon who attempts to go about his Saturday as a protest gathers on the streets of London against the UK’s involvement in the Coalition of the Willing. Perowne meditates about the invasion of Iraq and the war that has erupted because of it, even as he plans a nice family dinner. His errands are later interrupted by a mentally-disturbed man that bring the book to an unsettling conclusion.

London Fields (1989)
If there were one novel that encapsulated the hysteria leading to the end of the millennium, it may well be Martin Amis’ London Fields (a remarkable feat, considering it was written ten years prior). Set in 1999, Martin uses a mix of black comedy and macabre to tell the story of Samson Young, a writer who is terminally ill with writers block, and Nicola Six, a woman who is plotting her own murder. Other characters are comically bleak, including a porn-addicted small-time criminal dart player, an uncontrollable, hellish baby, and an underage sex worker. Amis’ masterful narrative unreliability (which must be read to be appreciated) is in full force here.

In the Light of What We Know (2015)
A sleeper hit debut, Zia Haider Rahman’s In the Light of What We Know won critical acclaim and numerous awards upon its publication. While it is narrated by an unnamed London-based banker, it primarily tells the story of his long-lost friend Zafar, a mathematics prodigy who one day shows up at his South Kensington home, unannounced. As the two sit around a kitchen table, Zafar recounts his unexpected life in diplomatic relations while his narrator hints at a career lost during the financial crash of 2008.

The White Review: A young but increasingly influential literature and arts magazine.
Granta: Long running journal and publisher of fiction and essays.
The London Review of Books: One of the world’s most intellectual reviews of literary criticism.

* This guide pulls from preexisting listicles curated by Harriet Clugston, Clara Chiarpei, and Reece Choules, for Culture Trip. As these previous lists may include items not shown here, links to these pieces have been hyperlinked in section titles.