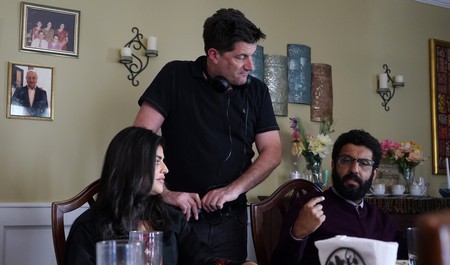 From L to R: Shenaz Treasury, Director Michael Showalter and Adeel Akhtar on the set of THE BIG SICK. Photo by Nicole Rivelli. © Studiocanal UK

The Big Sick is being hailed as one of the best romantic comedies of the year, and is even garnering some early awards buzz. We caught up with director Michael Showalter and found out what it was about this cross-culture love story that appealed to him.

Film and TV Editor Cassam Looch, began by explaining his differing experiences with films that try to comment on modern Asian relationships in the West.

Cassam Looch [CL]: I’ve seen quite few films that have tried, and failed, to deal with the issue of relationships between Asian characters. As a Muslim myself, I felt this one worked and hit the mark, why do you think it did?

Michael Showalter [MS]: Which parts worked for you?

CL: I think it works as a relationship drama in general, so my non-Asian, non-Muslim friends really related to it. But then in particular the relationship between Kumail’s (Nanjiani) Pakistani character and Emily’s (Zoe Kazan) American character and his family’s own relationship with one another was about as good as I’ve seen on screen.

MS: Why haven’t previous films worked for you?

CL: They don’t feel genuine. They feel like films that don’t have any real connection with the characters…

MS: That’s a great point. So Kumail wrote the story, and he is of a Pakistani/Muslim background. There is that. Of course, it’s based on his own life and relationship with Emily (Gordon), who is his partner in real-life too. It was important to get his side of the family right. At first they were rigid and austere and that draft implied that they needed to change and get with the programme. I felt that was not showing the whole picture. Kumail loves his family, and that’s what made his choices so hard. What assumptions did we, the outsiders, have that were wrong. We wanted to show there is no right or wrong, and that it is messy and complicated. There is a slot we don’t understand on both sides.

There are far more similarities than we give ourselves credit for.

CL: I felt that Kumail’s brother (Adeel Akhtar) in the movie, is also important in that regard. He is obviously living a different life, choosing to have an arranged marriage, and that is something working for him…

MS: Exactly. There’s a line in the movie, where he says “In Pakistan we have a word for arranged marriage. Marriage.” I love that line. I thought it was so interesting and how normal it is in some cultures.

The mother and father too have a great marriage. It asks us what does love mean? It’s not always the traditional rom-com scenario of meeting someone and falling in love and happily ever after. Other things happen… and work. 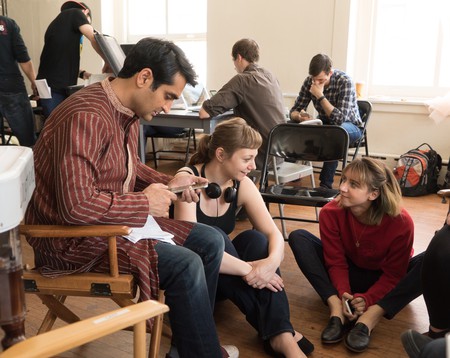 From L to R: Kumail Nanjiani, Writer Emily V. Gordon and Zoe Kazan on the set of THE BIG SICK. Photo by Nicole Rivelli. | © Studiocanal UK

CL: Kumail [Nanjiani] obviously wrote the script with his partner Emily [Gordon]. The pair have been married for 10 years now and I wondered if it was difficult for Kumail to see his story on screen?

MS: I think he is, and was, very passionate to tell this story. It is a mixture of many things but there was a real drive to see this story told.

I’ve known Kumail and Emily for a long time. When I first read the script I felt like I could relate to it. It wasn’t my life but there was relationship stuff, family stuff, career stuff. I mean, Kumail plays a young stand-up comedian and I was as well, so I wanted to tell this story. It feels relevant too. The tolerance message also comes across.

And also, the chance to work with [producer] Judd Apatow!

CL: The recent series of Master of None also touches on this sort of material. I wonder if there is a timely reason for why we are seeing more stories coming out at the moment?

MS: I think that’s down to more men and women from other cultures breaking through and telling their stories. It’s also mainstream now, it’s having Kumail and Aziz who have that audience.

CL: There is also another challenge in the movie, where you have to find humour in the darkest of situations. How can you go about finding laughs when Emily is in a coma…

MS: That was the big challenge. Figuring out how that works in a comedy but not at the expense of her situation. It can’t be too heavy that it becomes a soap opera. How do characters deal with pain with humour? That’s what made it click. You just have to say something funny or stupid.

As we were developing the script we were thinking of those characters and actors to play Emily’s parents. We got [with Ray Romano and Holly Hunter], exactly who we wanted.

CL: What has the reaction been to the film?

MS: Really strong, and that started at Sundance. The reviews have been really positive and people seem to connect to it. It might be the hospital scenes, the cultural content, or even the family drama. Different people relate to different things. They love the performances too. 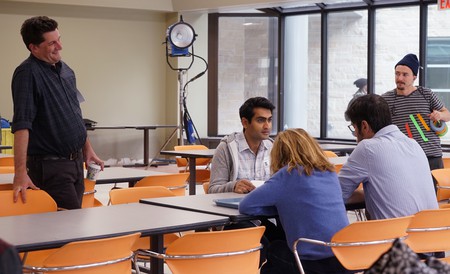 Director Michael Showalter and Kumail Nanjiani on the set of THE BIG SICK. Photo by Nicole Rivelli. | © Studiocanal UK

CL: I mean this as a massive compliment, this film felt like MY (500) Days of Summer…

MS: Thank you! There are certain films that are always in my mind, but the one that Emily, Kumail and I spoke about the most was actually Four Wedding and a Funeral! He spoke about Hugh Grant a lot while we were developing this. It’s a film about people and love and loss. It’s funny and heartbreaking. It also had the visual authenticity to it that we loved. It’s a real world. It’s a shared movie we love. It’s a personal favourite for me.

CL: My last question is about the ending. There were points before we get there, that I thought the film would end at and not give the upbeat climax we got.

Were you tied to that because this is ultimately a true story with a happy ending?

MS: I think we decided early on. We know that they are married and together. It was more about how far we go. It’s not the big finish with running to the train station and getting together. It is subtle in that way.

The Big Sick is out in the UK on 28 July