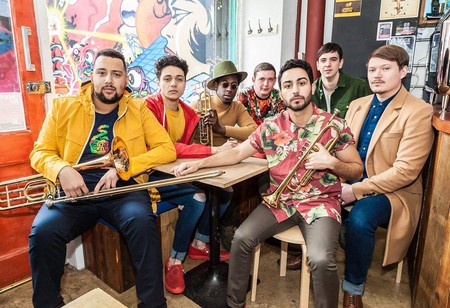 Birmingham has a proud history of spawning diverse musicians, from the likes of The Beat and UB40 to Black Sabbath, Duran Duran and more recently, Laura Mvula and Peace. Here are 12 of the best up-and-coming artists from the city.

Birmingham singer-songwriter/beatboxer Ed Geater is one of the more unusual stars in the city. Ed writes, records and produces his tracks himself and performs the layered masterpieces live using just an acoustic guitar, microphone and a loop pedal. Listen to him for yourself, you won’t be disappointed.

From the city that keeps on giving, local three piece band The Americas offer infectious indie rock in abundance. Their latest offering ‘Tenth Day Of May’ was recently aired at Villa Park to tens of thousands of people and has also seen support from the likes of Fred Perry Subculture.

Dame are an indie-electronic band, consisting of a collective of University of Birmingham students. Signed to local label New Street Records and having already sold out an EP launch in advance, it’d be a mistake not to check them out.

Paper Buoys started to turn heads following the release of their hard-hitting single, ‘Sharp As Razors’ – a politically influenced track with a great animated video. They’ve since gone on to release a different styled single and video, showing their versatility in a crowded market.

Often championed by online station BBC WM Introducing, Pleasure House are starting to make some serious strides – not just in Birmingham – but across the UK. They have recently been out on their first headline tour and with more dates planned, do keep an eye out for their infectious indie-pop in a city near you soon.

It’s set to be a big year for Birmingham’s Kioko. Having already played Glastonbury 2016 as well as shows with the likes of The Wailers, Lee ‘Scratch’ Perry and The Specials in recent times, this pop-reggae hybrid should be on your one to watch list.

Birmingham boys The Lizards are a psychedelic influenced band with big plans in the pipeline. They’ve already supported the likes of Hatcham Social and Jaws, and their experimental sound is set to catapult them to new levels throughout 2017.

Flying the flag for Birmingham’s urban scene is Lady Sanity, one of the city’s brightest hip-hop artists. Keeping it local with her video for ‘Can’t Say That’ filmed at Cannon Hill Park, bright things are expected of this local talent.

Blending intricate instrumentals with experimental tones, Hoopla Blue are one of our ones to watch in Birmingham this year. Signed to local record label, FOMA, the band are ready to step up, and a string of high-profile support slots should help them attain this.

Birmingham’s favourite garage rock duo The Mighty Young have been around for what feels like an eternity, but we predict that 2017 may see even more success for them. Selling out shows everywhere they go, the boys combine Americana rock with deep blues and garage rock to create an intense wall of sound.

Dorcha is the experimental project of local musician-extraordinaire Anna Palmer. Dorcha’s brooding sound has seen tracks picked up by the likes of BBC 6 Music, and they’ve got big plans for this year.

When a front-man mirrors Dutch Uncles’ lead vocalist Duncan Wallis, you know you’re going to like them. Cinema create synth-infused, jingly jangly pop that’s enough to make even the coolest of cats nod their heads at a gig – and speaking of gigs – they’ve already supported the likes of Theme Park and The Sunshine Underground, so big things are expected!