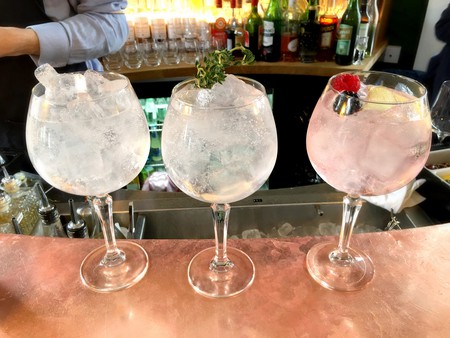 With the English gin boom gaining momentum it’s no surprise that there are hundreds of independent gin distilleries mixing botanicals up and down the country. Traditional bathtub gin has been pushed to the wayside in favour of delicate flavours influenced by world cultures. Here are the best tasting gins distilled in England.

This award-winning gin, which is made in small batch in Cornwall, is filtered with fresh Cornish water and mixed with Devon violets and orange zest. This modern take on the London dry is well balanced with the classic botanicals but with a subtle sense of being in the middle of a pine forest. Best served as a classic G&T with a large slice of lime.

If you’re over a certain age and grew up in England then Whitley Neill’s Rhubarb and Ginger Gin will send you on a whirlwind journey back to your childhood. This sweet concoction of rhubarb and ginger, twinned with some ginger ale and a wedge of lime tastes just like those scrummy Refreshers bars which were popular in the early 1990s, but without the diabetes risk. Best served chilled, with good friends and on the beach.

During the age of Samuel Pepys and Jane Austen London was awash with beautiful green spaces offering nights of hedonism. These pleasure gardens were places to see and to be seen and the Marylebone garden was one of the most famous. This mix of people and pleasure became the inspiration for the Marylebone Gin; a delicate balance of flavours from botanicals, handpicked from all over the world.

Who else needs a pick me up after today's dreary weather? Enjoy a @marylebonegin hump day treat @108marylebonelane 🍸

Most gins are made to be mixed, but the Dorset Conker has been distilled to stand on its own. Best served over ice and with nothing else, Conker tastes just like the English countryside at the beginning of spring with gorse flowers, elderberries and samphire all laced through this refreshing summer tipple.

There have been hundreds of gin distilleries in London over the centuries, but there are none quite like Sacred Microdistillery. This small distillery in a residential house in Highgate, north London, does things a little differently. Each botanical which goes into Sacred is distilled separately under a vacuum so that distillation occurs at a lower temperature than in traditional pot stills. This makes the gin slightly creamier than your average Joe G&T. Mix as you like.

Campfire Gin was made out of a love of the outdoors, adventure and total free-spiritedness. The creators wanted people to realise that gin wasn’t just for cocktail parties and summers on the lawn, but for passing around in a mug sat next to a campfire after a long day on the trail too. So Campfire Gin was made, and a mix of sweet coffee cherry, hazelnut, juniper and orange all come together to bring the taste of the great outdoors to your G&T. Best served with tonic, a sprig of rosemary and slice of orange.

Our first cocktail of the evening is a Campfire Blackberry Smash: Gin, Blackberries, Lemon Juice and Simple Syrup. Muddle the blackberries in the bottom of the shaker add the other ingredients and ice, shake and strain. We picked the blackberries on the way back from our swim and this simple cocktail is gorgeous and fabulous by the fire. #cocktails #saturdaycocktails #gin #blackberries #camping #campfire #campfiregin #spiritoftheoutdoors

This artisan gin was inspired by the English south coast and as such has a fresh flavour which reflects coastal living. Fishers Gin has four botanicals which are unique to this blend, including bog myrtle whose scent changes throughout the year to reflect the seasons, the smoky wood avens, spicy rock samphire and spignel, a complex herb which ends in a different taste for everyone; some say it tastes of wood smoke, others celery. These botanicals are hard to come by and difficult to forage, meaning this gin is a labour of love. Best served with Mediterranean tonic and a samphire garnish.