The Best New Films to See in Cinemas after Lockdown 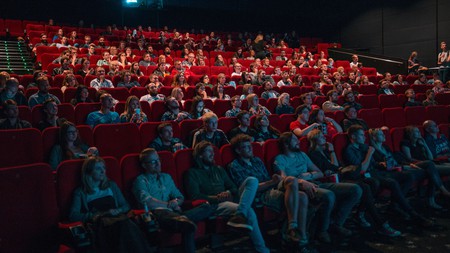 Many cinemas are opening back up after lockdown, but when certain films will be released is anyone's guess | © Krists Luhaers / Unsplash

Cinemas were one of the first spaces to close with the outbreak of Covid-19. They are also some of the first to tentatively reopen in line with local government advice. Here are some big releases to coax you back into multiplexes.

The cinematic landscape appears to have been changed forever since the coronavirus pandemic. Movie productions have been postponed and release dates have kept shifting. Drive-in cinemas have popped up to fill the void and, in an effort to kickstart the industry, major distributors have re-released a slew of classics to tempt anxious film fans back into movie theatres. Ultimately, the true test will come when major new releases return to the big screen. Here is our guide to some unmissable blockbuster presentations coming soon*.

* Please don’t ask us how soon, as all these release dates have been fluctuating wildly in recent months.

Disney’s live-action adaptation of its own animated classic was unfortunate (or perhaps very fortunate) to just miss its international release date earlier this year. The big-budget production was not only finished and ready to hit cinemas, it had even been screened to critics and had a glitzy premiere, before studio bosses pulled it for fear of its initial run being curtailed. In retrospect, this seems like a wise move, as Mulan now has tremendous word-of-mouth buzz and seems like the perfect film to pack theatres when it becomes one of 2020’s first big releases. Some of the scenes were shot in New Zealand, but most of the external scenes were completed in Xiaochun Tulou, China.

If you wondered how long it would take for disaster movies to make a comeback, given the real-life disaster we’ve all been living through for the last few months, wonder no more. To be fair to Greenland, the film was conceived and completed long before coronavirus struck, but it’s still a fascinating project to release at this time. The plot sees John Garrity (played by Gerard Butler) and his family make a desperate bid for safety by heading to Greenland as the rest of the planet is levelled by comet fragments. Will this movie prove to be what cinema-goers are after to release their pent-up anxiety, or will its depiction of society crumbling in the face of adversity hit too close to home?

One of the consequences of fewer big-screen events has been an unwillingness of distributors to release trailers they think deserve the full cinema treatment. As a result, all most people have seen of the much-anticipated reboot of Dune is a series of nondescript images. Denis Villeneuve has been on a hot streak with critics following Blade Runner 2049 (2017) and Arrival (2016), and his latest feature has a killer cast, featuring Timothée Chalamet and Oscar Isaac for this new adaptation of Frank Herbert’s 1965 novel.

It’s not all bombastic blockbusters and big-budget extravaganzas at the cinemas in the summer months. This period often sees the release of more sedate affairs, and Summerland (2020) looks like a real charmer. This Gemma Arterton drama is set to be one of the first new films released in the UK since coronavirus and is already drawing positive reactions from the online film community based on the trailer alone. The white cliffs of Seaford in East Sussex feature prominently in the clips we’ve seen of the movie so far, and will fill most Brits with a lot of national pride.

The New Mutants (2020) was previously the butt of jokes when it came to films that were constantly being moved in cinematic release schedules. It has been nearly two years since the film was supposed to be unleashed, but there’s no sign of it anywhere. Well, those comic-book heroes now have some competition for the unwanted title of cursed film releases from Christopher Nolan’s Tenet. The perplexing sci-fi thriller held firm as others around it abandoned ship, but now it looks like the planned August release will have to be shifted for a fourth time. Star Robert Pattinson has also seen his planned Batman movie shelved for the time being as well. Will we ever see R-Patz on the big screen again?

Another film that nearly snuck out in cinemas before lockdown, this sequel to the 2018 horror thriller has tested well with preview audiences. John Krasinski returns to direct, but won’t be starring in it after his character died in the first film. His real-life wife, Emily Blunt, does return, although an opening flashback scene, set before the events of the original, sees all the family reunited. Phew, that was simple to understand, wasn’t it? Now that social distancing measures have been introduced in cinemas, perhaps those people who complained about noisy popcorn munchers ruining the first film can find some peace and quiet too.

Taking the dreamy locations along the Nile as a starting point for another adventure featuring Hercule Poirot, director Kenneth Branagh, who also stars as the main character, takes a second stab at a classic Agatha Christie story. With an all-star cast, and shot on location in Egypt, this film will is set to get you yearning for an outdoor adventure – as long as you don’t mind the odd murder along the way.

Arguably the biggest casualty of lockdown has been 007. MI6’s battle-worn spy has survived many global threats before, but things aren’t looking great for Bond in the wake of the global pandemic. The final entry in the Daniel Craig-fronted series takes our hero on another globetrotting adventure from the Italian city of Matera to Jamaica, but when we get to see it is anybody’s guess. This film is now rumoured to be facing further delays and an eventual release sometime in 2021.