The Best Cinema Releases to See in September 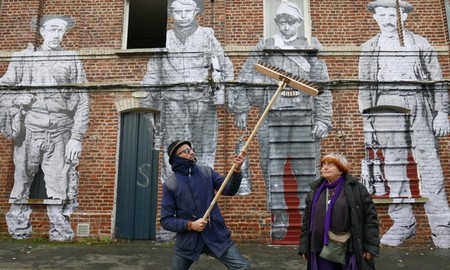 JR, Agnès Varda, and coal miners of the past in Faces Places | © Cohen Media

A dose of horror, some adrenaline-fuelled action and a helping of high-end fashion all feature in the pick of movies coming out this month.

Part of the ever-expanding Conjuring universe, this horror release will be the first movie in series chronology. We saw a hint of the titular character in The Conjuring 2 (2016) and even more in the spin-off Annabelle: Creation (2017), but now we witness the origin of the terrifying creature. The franchise has had some highs, as well as some notable lows, but on the basis of this trailer The Nun is shaping up to be one of the best.

In Praise of Nothing

Iggy Pop narrates this heartfelt documentary, which may in fact be a parody of factual filmmaking, that is about… nothing. The art of doing nothing at all is celebrated and delivered in prose by the American rocker. One for the nihilists out there.

The announcement that Shane Black was to take on the intergalactic hunter in the fourth Predator movie was met by wild excitement. The writer/director is something of a hipster favourite, having made innovative buddy cop movie Kiss Kiss Bang Bang (2005) and Iron Man 3 (2013), which came with the still-hard-to-fathom twist of Sir Ben Kingsley as a washed up old drunk pretending to be a super-villain. Brave and uncompromising decisions seem to be his forte, but there has been a distinct lack of enthusiasm for his latest movie following the debut of the trailer.

The Hatton Garden bank raid has already been made into a film. The previous, low-budget effort was quickly forgotten too, but this take on “the take” has some pedigree. Sir Michael Caine leads the cast and is supported by an assortment of older gentlemen in keeping with the criminals who pulled off one of the biggest heists in British history.

Peter Berg and Mark Wahlberg team-up again in this breathless action adventure set in Indonesia. The pair scored success with Lone Survivor (2013), Deepwater Horizon (2016) and Patriot’s Day (2017) which were all based on true stories, but this is an entirely fictional story with the focus firmly on shoot-outs and political espionage. The phenomenal Iko Uwais, best known for The Raid (2011) does a fair amount of the hand-to-hand combat we see, leaving Wahlberg plenty of time to pose with a gun and fire off one-liners.

Mommy-blogger Stephanie Ward (Anna Kendrick) takes on the role of amateur sleuth when her best friend (Blake Lively) mysteriously disappears without a trace. Small town paranoia plays a big part in the film while Paul Feig appears to have made a slight shift in tone from his previous films.

Gaspar Noé, the Argentine born director who lives in France, is back with another “cinema of the body” effort. Climax premiered at Cannes earlier this year and prompted a handful of walkouts, although apparently not enough for Noé’s liking. The film revolves around a hip-hop dance troupe experiencing a bad trip after experimenting with drugs at a wild party.

We’ve been raving about this French documentary for over a year now, and its finally getting a theatrical release. Veteran filmmaker Agnès Varda, whose sight is failing but remains energetic as ever at 89-years-young combines her duel passions for moving images and photography as she tours France with JR, an experimental artist and photographer. The unlikely paring make for a fascinating screen couple.

The House with a Clock in its Wall

Jack Black and Cate Blanchett headline this entertaining Eli Roth movie based on a popular children’s novel of the same name. Roth is best known for his gruesome horrors such as The Green Inferno (2013) and Hostel (2002), so it will be interesting to see how his particular set of skills transfer to the family-friendly fantasy genre.

Lenny Abrahamson’s follow-up to Room (2015) is a gentle gothic horror based on the 2009 novel by Sarah Waters. Domhnall Gleeson plays a doctor from a working class background in the 1940s who has an unhealthy obsession with a grand house he remembers from his childhood.

The Gospel According to André

André Leon Talley grew up in the segregated American south and his rise to the top of the fashion industry is a remarkable journey. It’s a story brought to the screen in this eye-opening documentary which also features other leading lights from the clothing world such as Vogue editor-in-chief Anna Wintour. Look our for more fashion stories this month with our coverage of London Fashion Week.

Seen as a signal of Hollywood’s more “woke” attitude in the aftermath of the #OscarsSoWhite movement from a few years ago, Crazy Rich Asians is an asian-led comedy that has stormed the box-office internationally prior to its UK and US release. There’s no denying that this is an important moment in the history of cinema, but will this film have the same impact that Black Panther had earlier in the year?