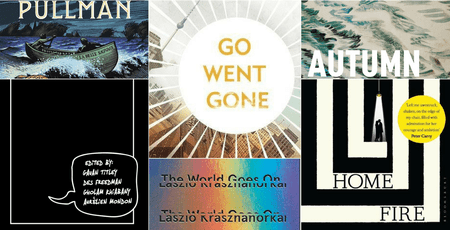 Sure, summer may be fast coming to an end, but literary animals shouldn’t let that get them down. Not only are there few things better than the ruin of autumn—visions of shedding trees and naked wood—to turn the softest idler into an ardent reader. But beyond failing wilderness, fall is also publishing’s busiest season. Here are just a few of the UK releases we’re most excited about.

The Rub of Time, by Martin Amis

One of his generation’s most popular authors, as well as one of its most popular targets for journalistic harangues (sometimes merited, most often not), Martin Amis is publishing his fifth nonfiction collection this October. Featuring essays written between 1986 and 2016, and on such topics as Saul Bellow, Princess Diana and Donald Trump, The Rub of Time sets out to prove, yet again, that Amis is just as talented a critical writer as he is a purveyor of fiction—if not more.

This Little Art, by Kate Briggs

After The Hatred of Poetry and Essayism, publisher Fitzcarraldo’s latest extended essay on a written form is set to tackle translation. Kate Briggs, professor at the American University of Paris, uses her experience translating Roland Barthes’s lectures at the Collège de France to investigate her craft, its history and its aesthetic implications. This Little Art comes out in September.

The much-acclaimed German writer’s much-acclaimed latest novel is set to be published next month, courtesy of a translation by Susan Bernofsky. Go, Went, Gone tells the story of one Richard, a Berliner and retired classics professor, who becomes involved in the lives and fate of refugees living in a shelter in the city. A novel for our time, then.

One of the Syrian revolution’s foremost intellectual voices, Yassin al-Haj Saleh—now exiled in Istanbul—delivers an illuminating, meticulous analysis of the world’s most devastating conflict. Composed of a series of essays written between 2011 and 2015, this book is both a necessary account of the war’s origins and tragic evolution, but also a testament to its author’s intellectual reckoning of the horrors at hand. A must-read, particularly in our “progressively Syrianized world,” as he puts it.

The Norwegian literary sensation, whose acclaimed My Struggle series inspired in readers around the world a level of addiction worthy of their favorite phrase (such literary junkies), returns to the shores of English publishing with his latest project. Autumn is the first of four seasonal books to be released in quick succession, built around the premise of explaining the world—in various small snippets—to his yet unborn daughter. Each tome is translated by Ingvild Burkey and illustrated by a different artist, featuring in this case the atmospheric work of Vanessa Baird.

The World Goes On, by László Krasznahorkai

The Hungarian postmodern master, winner of the Man Booker International Prize in 2015, returns this November with a collection of linked short stories translated into English by a team of three: John Batki, Ottilie Mulzet and George Szirtes. Dense, philosophical and poetic—the book promises to be every bit as contemplative a beauty as his most celebrated previous publications.

Three years after the publication of her prize-winning/bestselling debut novel Everything I Never Told You, American writer Celeste Ng returns with a work once again embedded deep in Americana—and once again, at least at first, set in 1970s Ohio. Little Fires Everywhere centers around the burning of a home of a seemingly ‘normal’ family, in a town called Shaker Heights, and questions the very foundations of American suburban life. Out in September.

The Red-Haired Woman, by Orhan Pamuk

What’s there to say about Orhan Pamuk that hasn’t been said before? Winner of the Nobel Prize in 2006, and without doubt the most celebrated Turkish writer of his generation, he returns with a tale of murder and well digging set in a rich and vibrantly described mid-1980s Istanbul. Translated by Ekin Oklap, out late August.

That’s right: the author of the greatest young adult fiction series of the past few decades (sorry, Harry Potter) returns to his wonderful creation, 17 years after the publication of the trilogy’s last novel. This book takes place ten years before the events of His Dark Materials (and apparently also includes its main character, Lyra Belacqua) and is set in her otherworldly Oxford. Will be published in October.

The Golden House, by Salman Rushdie

After Knausgaard, Amis, Pamuk, etc… another big-hitter is to be published again this September, and it’s quite possibly the biggest of them all. Salman Rushdie, of course, needs no introduction, but his latest novel promises much: set at the height of New York society and over the past decade, it aims to offer a chronicle of its post—2008 unraveling. Out in September.

Not yet out (it’ll be published on 15 August), and already longlisted for the Man Booker Prize, Home Fire is the latest novel by the celebrated British-Pakistani writer. A retelling of Sophocles’s Antigone, it transposes the Greek original’s moralizing tragedy to modern times, and in particular to immigrant siblings in London, torn apart by love, duty and politics.

My Absolute Darling, by Gabriel Tallent

This much-hyped debut novel—adorned most notably by a blissful blurb written by one Stephen King—tells the distressing tale of a 14-year-old girl’s escape from her violently abusive father. A graphic, visceral read, My Absolute Darling is said to offer a reading experience unlike any other. Out at the end of August.

Twenty-one scholars and writers from around the world write on the social, political, and psychological impact of the 2015 Paris attacks. Analysing in particular the symbol that has become Charlie Hebdo, as well as the worrying developments that have followed it in Europe and beyond, the book aims to tackle questions of national identity, free speech, the role of traditional and social medias, as well as the fight against racism. Out in November.

Award-winning writer Jesmyn Ward returns this September with a third novel, six years after the publication of her critically-acclaimed Salvage the Bones (a period of time during which she busied herself with a memoir and a collection of essays). Set in modern, rural Mississippi, Sing, Unburied, Sing follows a fractured and troubled family as they travel across their state, and features Ward’s lyrical prose, as well as a ghost or two. Out in September.