The Most Beautiful Towns in Northern Ireland, UK 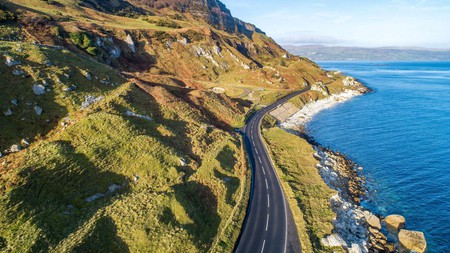 Famed for its beautiful coastline and natural wonders, Northern Ireland has some of the most beautiful towns in Europe, with long sandy beaches, historic buildings and spectacular mountains. From Bangor and Ballymena to Antrim and Coleraine, here are the top towns every traveller must visit. 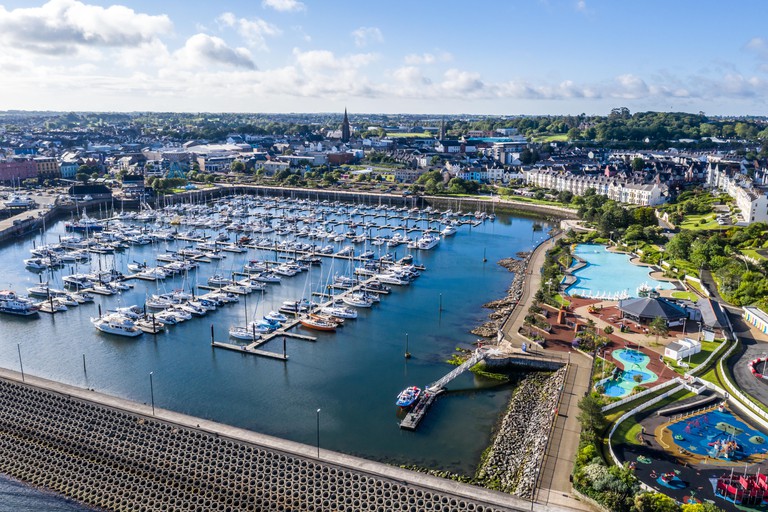 Located in County Down, the beautiful town of Bangor is situated on the southern side of Belfast Lough. It is close to Belfast city and a popular seaside resort, meaning it is the perfect location for tourists. The name Bangor is derived from the Irish, meaning “horned curve”, which perhaps refers to the shape of Bangor Bay. Landmarks in the town include the Old Custom House, the Clandeboye Estate, the marina and the Royal Ulster and Ballyholme Yacht Clubs. The town is steeped in history, with artefacts such as swords that date back to the Bronze Age. During the 19th century, the town became a popular seaside resort for Victorian holidaymakers, with much of the architecture of the town dating from this period. With its sandy beaches and scenic promenades, you’ll want to make sure to experience the beauty of Bangor. 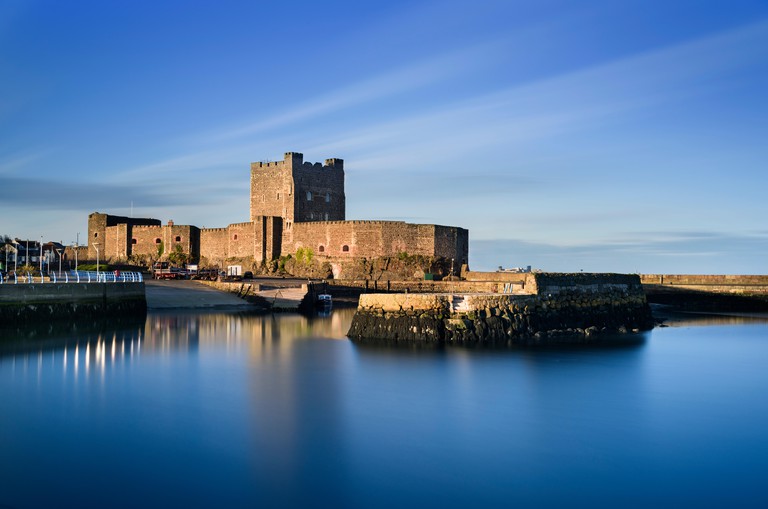 © Clearview / Alamy Stock Photo
Situated in County Antrim, Carrickfergus is found on the northern shore of Belfast Lough. The town’s name comes from the Irish, meaning “rock of Fergus”, which pays reference to Fergus Mór mac Eirc, the sixth-century king of Dál Riata. It is one of the oldest towns in both Northern Ireland and Ireland. Evidence of the original town can be seen by the various segments of wall dotted around the locale. Several artefacts have been found dating from the 12th and 13th century, when the walls were excavated and preserved. Well-known landmarks and tourist attractions in the town include Carrickfergus Castle, one of the best-preserved Norman castles in Ireland. Carrickfergus also has the longest-surviving coal gasworks in Ireland. Celebrating its history is the Flame Gasworks museum. Other must-see sites include the spectacular marina, the mill ponds with their variety of wildlife and the Carrickfergus Museum and Civic Centre.

A picturesque town with spectacular waterside views, Coleraine is a popular destination for visitors to Northern Ireland. Located near the mouth of the River Bann in County Derry, the town has a rich history, and it has evidence of one of the earliest human settlements in Ireland. Its name derives from the Irish for “nook of the ferns”. This relates to the legend of Saint Patrick and how, when he arrived in the town, the local chieftain offered him a piece of land on which to build a church. The land was situated next to the river and dense with ferns, and, thus, the Irish name for the town was created. This later became anglicised as Coleraine. The town is renowned for its beauty and has won various accolades, such as Best Kept Town and Ulster in Bloom awards in 2002. It was also named the Best Kept Large Urban Centre in Northern Ireland in the TidyTowns competition. The town is also one of the main stopping points on the way to the Giant’s Causeway. The distillery village of Bushmills is also located nearby. 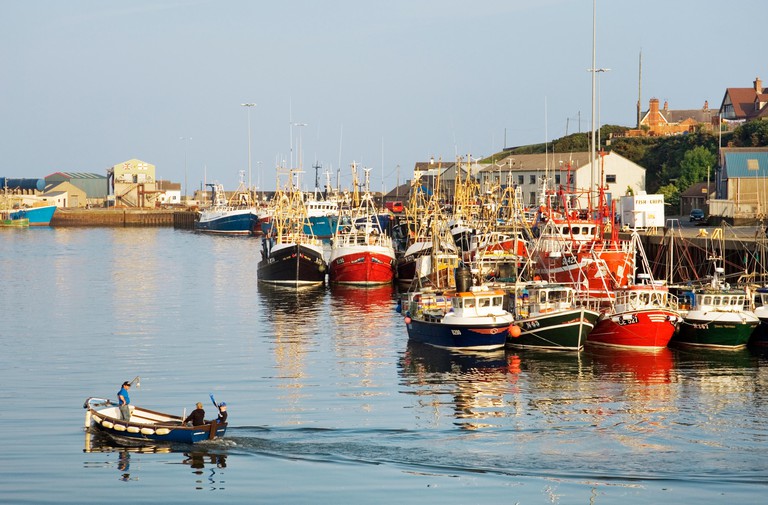 On the coast of County Down, and within the historical barony of Mourne, is the quaint town of Kilkeel. Now one of the main fishing ports in Ireland, Kilkeel’s charm comes from its mixture of ancient ruins, terraced shops and winding streets waiting to be explored. The name of the town comes from the Irish, meaning “church of the narrow” and refers to the 14th-century church and fort overlooking the town of Kilkeel. The church was constructed in 1388 and dedicated to St Colman del Mourne. Kilkeel was once the capital of the ancient Kingdom of Mourne and sits to the south of the picturesque Mourne Mountains. There are many trails through the mountains, ideal for hillwalkers and sightseers. Other must-see cultural sites are the Mourne Maritime Visitor Centre for Kilkeel’s heritage and history and the Silent Valley Reservoir for landscapes and wildlife. 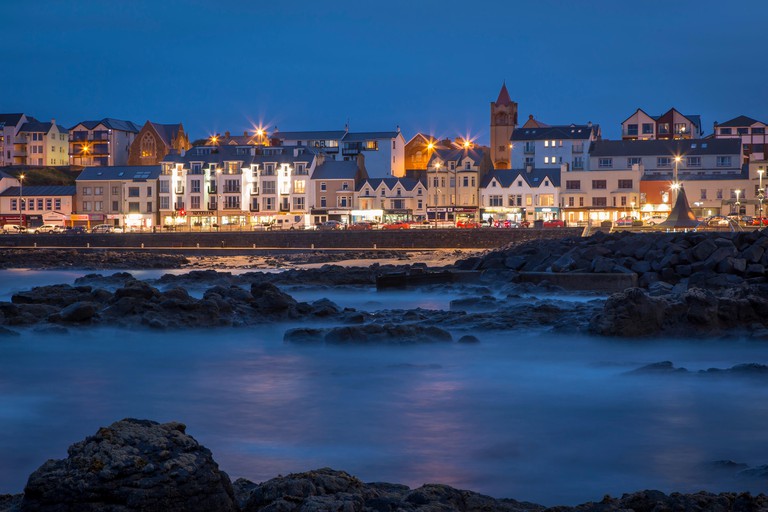 A must-visit for any beach lover, Portstewart is located in County Derry. A popular seaside resort, the town of Portstewart contains a harbour, coastal paths and 2mi (3.2km) of sandy beaches known as the Strand. The main activities in the town are sea-based, such as surfing and swimming, but there are also many cliff walks and trails that attract visitors who like to explore. The current town was founded by John Cromie in 1791 and named after his maternal ancestors, the Stewarts of Ballylesse. However, there’s also evidence of settlement in the area dating as far back as the Neolithic era. Key heritage landmarks in the town include the Dominican College, built on the former site of O’Hara’s Castle, and Saint Patrick’s Well at the top of the Strand – once used for horse racing. 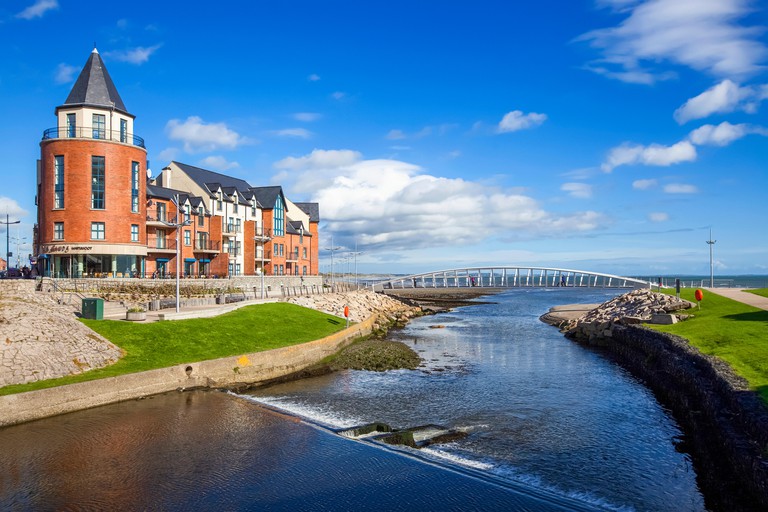 For golf enthusiasts and beach lovers, Newcastle in County Down is worth a trip. The town lies on the coast of the Irish Sea, at the base of one of the Mourne Mountains, known as Slieve Donard. The name of the town comes from a castle that once stood at the mouth of the Shimna River and was referred to as New Castle in the Annals of the Four Masters. The history of the town is filled with folklore and myth, and many of the names of its places are derived from local legends. One such place is Saint Patrick’s Stream – where Saint Patrick supposedly banished all the snakes in Ireland. Famous visitors to Newcastle include George V and Queen Mary, grandparents to Elizabeth II, who came to open the then newly built Slieve Donard Hotel. For nature lovers, Tollymore Forest Park, Donard Park and the Murlough National Nature Reserve provide scenic views and varied wildlife. At the front of the reserve is an ancient Neolithic portal tomb, called Slidderyford Dolmen or Wateresk.

Located in Country Antrim, the current town of Ballymena was built by the Adair family in 1626. It was constructed on land given by King Charles I on the condition that there be two annual fairs and a free market on Saturdays. The market still takes place today. The town is sometimes known as the City of the Seven Towers. Evidence of settlement in the town dates back to as early as the fifth century, and there are many ringforts located in the vicinity that reflect this. During the 19th century, a gravedigger uncovered a large stone that bared the inscription “ord do degen”, which refers to a seventh-century bishop in Ireland. The stone can be observed on the porch of St Patrick’s Church located in the town. Sites to visit include the People’s Park and the Braid – Ballymena Town Hall & Museum Arts Centre. Famous locals from the town include the Hollywood actor Liam Neeson. The town is also located near Slemish Mountain, where Saint Patrick is said to have worked as a shepherd for six years. It is thought that his time on the mountain led to him praying frequently and, thus, converting to Christianity. Patrick returned to Ireland after he was freed from slavery and converted people on the island. The mountain draws numerous pilgrims and hillwalkers every year, particularly on March 17, Saint Patrick’s Day. 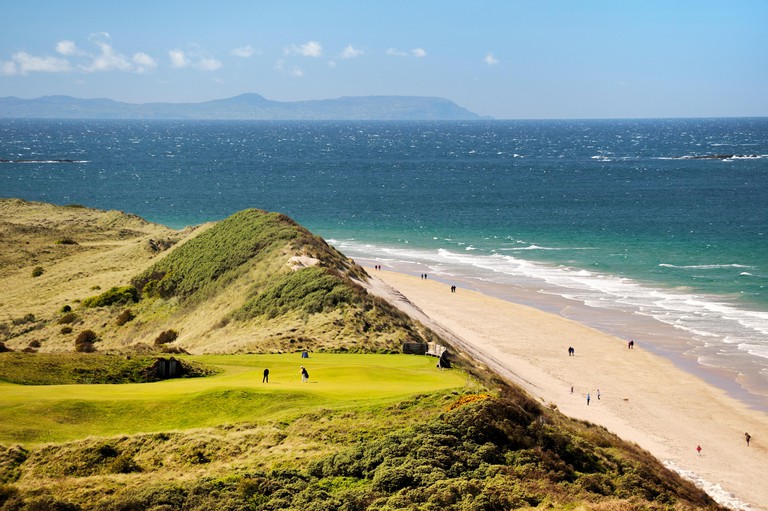 Situated in Country Antrim, and on the border of County Derry, is the seaside town of Portrush. Translated from the Irish and meaning “promontory port”, Portrush is known for its many hotels, restaurants and bars. It is also home to the Royal Portrush Golf Club – the only golf club outside of mainland Britain to have played host to the Open Championship. Other visitors to the town come for its sandy beaches known as the West Strand, the East Strand, Curran Strand and White Rocks. On the East Strand is a 13ft-high (4m) sculpture created by sculptor Holger Lönze, called To the People of the Sea. A collection of rocks off the coast, known as the Skerries, is a habitat for species of wildlife. The town has ancient roots that date back to the Larnian or late Mesolithic period. The town is located near the Giant’s Causeway and was once connected to it by the Giant’s Causeway Tramway, which no longer operates. Popular destinations for tourists also include the Portrush Coastal Zone. 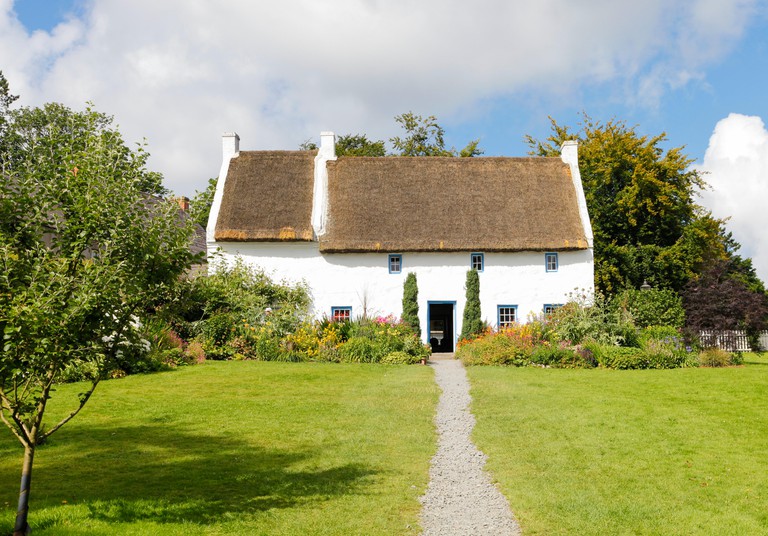 Found on the shore of Belfast Lough, between Belfast and Bangor, is the town of Holywood. Pronounced the same as Hollywood, this town in County Down is known for its annual jazz and blues festival, many fashion boutiques and arts and crafts creations as well as a popular destination for sea bathers. The town’s name comes from the Latin Sanctus Boscus, which means “holy wood” and refers to the woodland surrounding the monastery of Saint Laiseran, the son of Nasca. Another ancient connection is the Old Priory, whose ruins date back to the early 13th century. A number of distinguished people are buried in the graveyard at the Priory, such as Robert Lloyd Praeger, the famous botanist, and his sister Rosamond Praeger, the sculptor and writer. One of her sculptures is located in the town. The town is also known for its maypole in the centre at the crossroads. Its origins are not known, but it is said to have been erected around 1700, following the running aground of a Dutch ship on the nearby coast. Visitors should also pop into the Maypole Bar, known locally as Carty’s or Ned’s. Also recommended is travelling a short distance to the Ulster Folk and Transport Museum. 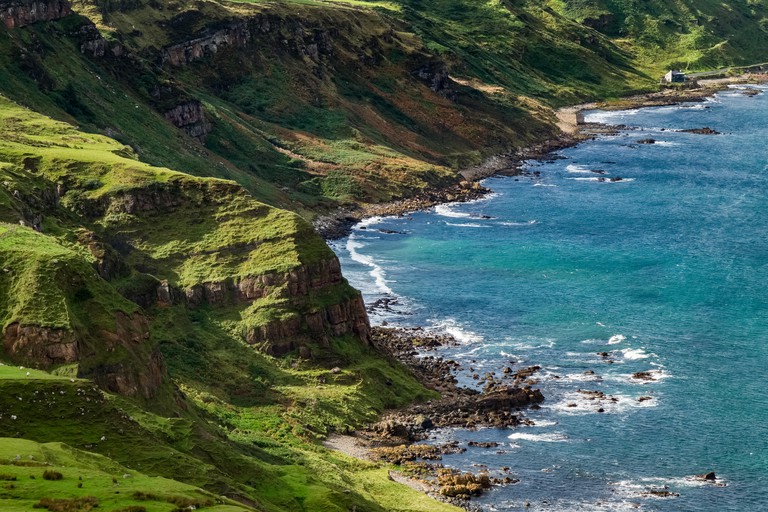 With its name meaning “town of the castle”, Ballycastle in County Antrim is situated on the northeastern most tip of Northern Ireland, on the Antrim Coast and Glens Area of Outstanding Natural Beauty. The town provides spectacular views of the coastline as well as the Rathlin Island and the Mull of Kintyre in Scotland. The town’s headland, Fair Head, rises 196m (643ft) out of the bay. Visitors to the town often walk the trail known as the Grey Man’s Path, which winds its way around the rugged coastline. Goats can often be seen roaming along the cliff’s edge and between the rocks. Other scenic views are provided by Knocklayde, a heather-covered mountain overlooking the town. Travellers to the town can also unwind on Ballycastle Beach, a designated Blue Flag beach and a popular spot for fishing. A cycling route runs from Ballycastle to Torr Head and Cushendun, offering spectacular views and scenery. Additionally, the town is known for its many historic churches. Popular events include the Ould Lammas Fair, held annually on the last Monday and Tuesday in August.