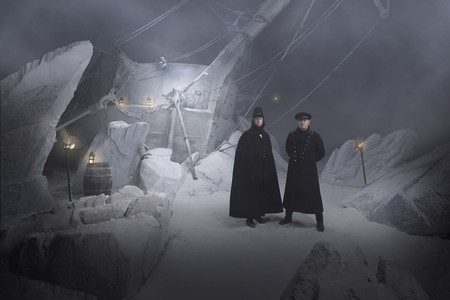 AMC’s new horror drama The Terror, an adaptation of a 2007 novel by Dan Simmons, depicts a failed Royal Navy exploration to the Northwest Passage. We spoke to two of the stars, Tobias Menzies and Jared Harris, to find out about the real horror that the men onboard the vessels face up to in the TV series. 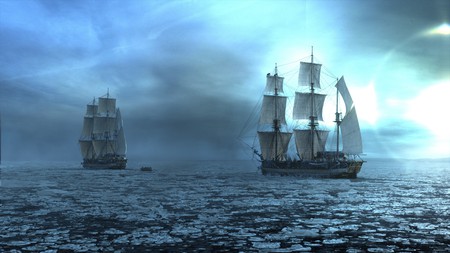 The book is a fictionalised account of of Captain Sir John Franklin’s lost expedition of HMS Erebus and HMS Terror to the Arctic, in 1845–1848. Jared Harris, who spoke to Culture Trip last year whilst making the series, told us more about what he knew about the real-life background of the adventure before embarking on his own journey to star in it.

‘I knew nothing’, the Allied star explains. ‘That was the appeal. When you get a script nowadays it’s a remake or a reboot or a sequel or a prequel. Something like “Robin Hood! Again!”, but this was completely new material and a unique story. I loved the intelligence and restraint of the writing. There are stories and threads that develop over the entire series and it highlights the confidence they have in the audience too’, Harris added.

Menzies, who is best known for his dual roles in popular Starz series Outlander, is just as honest about what he knew, or didn’t know, in this case. ‘It isn’t that well known in the UK, even though it was a British naval expedition [that went wrong]. It is quite well known in Canada though. It’s taught in schools, but digging into it was very exciting. To a large extent, we don’t really know that much. There are some documents that were found and have recorded dates and deaths. We honour those, but the conversations and what happened, over years in this series, are largely unknown. We were keen to honour those people, but also add the genre element with a creature…’

In recent months, additional wreckage has been found. The timing is fortunate, but not deliberate. ‘It’s not like AMC were holding this back and suddenly announced “We found them!”,’ Menzies jokes. 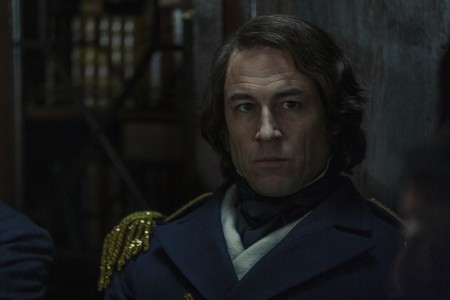 Joining Harris and Menzies is Ciaran Hinds as Captain James Frankin. Although there are some strong horror elements throughout the series, the cast were all keen to speak about the historical drama side of the story too.

‘We keep the creature back. It’s a psychological thriller for the most part and unsettling, but not gore and shocks. It is not Walking Dead, but more a Victorian horror. There are some shocking moments in it, and we don’t turn away from it. The adage of “Don’t show the shark” really pays off,’ Menzies says, when asked about the tone of the series.

‘It starts off grim and doesn’t get better. It was bleak, but we have to portray a chance of them maybe getting out of the situation. That was the challenge. It’s a whole load of British actors, so we did have the fine tradition of gallows humour along the way’ Harris says.

The characters of Commander Fitzjames and Captain Crozier, played by Menzies and Harris respectively, were actually quite well known and documented before this particular voyage even began.

‘Crozier is based on a Northern Irishman, but from a time when the country was a single entity. The concept of Republicanism was only just coming in and taking shape,’ says Harris.

‘He would have certainly identified as British. He joined the service of The Crown at the age of 13, but later comes to the realisation that there is glass ceiling for someone like him. Even though he is the most experienced Polar explorer, he’s not in charge. He already knows he will be written out if the mission is successful, but that he will be the forgotten man of history. I read a lot of his letters before he disappeared in the ice. He had an adventurous spirit too, but knew he had to be at sea to secure his future. They were the rockstars of the era.’ 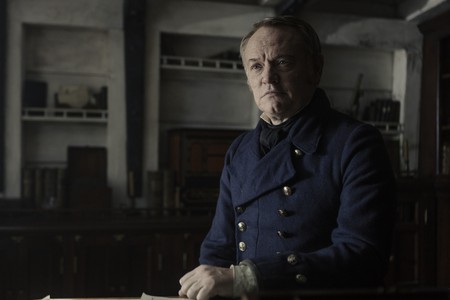 Menzies also reveals that there was a lot of background material available on Fitzjames too. ‘He was a star of the age. There were actually a couple of biographies written about him. You have to knit together what you find out, but also add in what the show needs from him. The heart of who he is, the fact that he isn’t everything he appears to be when we first meet him, is weaved into the show.’

‘I didn’t want it to descend into a monster story, which otherwise can get very boring. It is a character driven show, and a cautionary tale about Imperialism’, Harris summarises when talking about the 10 episodes of The Terror.

BT TV will be broadcasting the first episode of The Terror for free in the UK via Youtube on April 24.