Shortlist Announced for UK's Most Exciting Prize for Small Presses 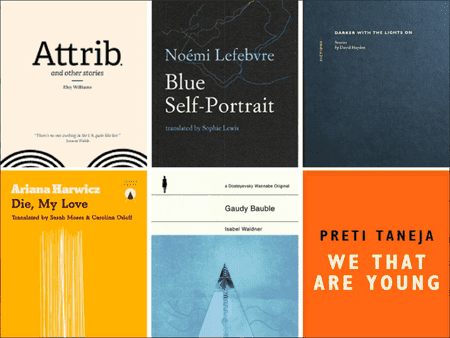 Covers courtesy of The Republic of Consciousness Prize for Small Presses

The shortlist for The Republic of Consciousness Prize, which awards small presses for supporting ‘hardcore literary fiction and gorgeous prose’, was announced at a ceremony on Monday, February 19 at Manchester University’s Centre for New Writing.

From the 16-strong longlist announced in December 2017, six remarkable works of prose and their corresponding publishers have made it to the shortlist, with the winner being announced in the spring.

Founded in 2016 by author Neil Griffiths as a way to support and showcase small, independent presses, The Republic of Consciousness Prize has garnered support from The Times Literary Supplement (TLS) as its official media partner, as well as financial backing from the Arts Council. Last year’s winning submission was John Keene’s Counternarratives, published by Fitzcarraldo Editions, an independent London-based publisher that has been lauded as ‘the most exciting publishing house in the UK right now’ by Stuart Evers in the New Statesman.

Included on the shortlist this year is Manchester-based publisher Dostoyevsky Wannabe’s Gaudy Bauble by Isabel Waidner, which is set in ‘a glittering world populated by Gilbert & George-like lesbians, GoldSeXUal StatuEttes, anti-drag kings, maverick detectives, a transgender army equipped with question-mark-shaped helmets and pets who have dyke written all over them’. Novelist Olivia Laing praised the novel’s unique vitality, adding: ‘The future of the queer avant-garde is safe with Isabel Waidner.’

David Hayden’s debut short story collection Darker With the Lights On also features, published by Stroud-based Little Island Press. In his series of vignettes, Hayden’s prose is both unnerving and majestic, described by The Guardian as a ‘brilliantly disturbing and unclassifiable debut collection’.

Attrib. and other stories by Eley Williams (Influx), Blue Self-Portrait by Noémi Lefebvre (Les Fugitives), Die, My Love by Ariana Harwicz (Charco Press) and We That Are Young by Preti Taneja (Galley Beggar Press) make up the remaining four spots on the shortlist.

The prize’s founder Neil Griffiths, commented on the announcement of the shortlist, saying: ‘This is a bold and surprising, almost flamboyant, shortlist. I love that two of the presses are less than two years old, and that without design we have novels, translated fiction and short stories represented. Every shortlisted work has flown over our impossibly high bar of “hardcore literary fiction and gorgeous prose” with its own unique style.’

Open to any publisher in the UK and Ireland with less than five employees, the winner of the prize will receive an award of £5,000 split between the publisher and author, while all shortlisted presses will receive £1,500, a third of which will be recovered by the author. This year’s prize will be judged by a panel including booksellers from up and down the country, reviewers and readers, as well as a contributor to the TLS.

The winner will be announced at a ceremony in London on March 20.

Shortlist for 2018’s The Republic of Consciousness Prize for Small Presses:

Attrib. and other stories by Eley Williams (Influx)

Darker With the Lights On by David Hayden (Little Island Press)

We That Are Young by Preti Taneja (Galley Beggar Press)