Revealed: This Is How Britain Makes Bacon Sandwiches 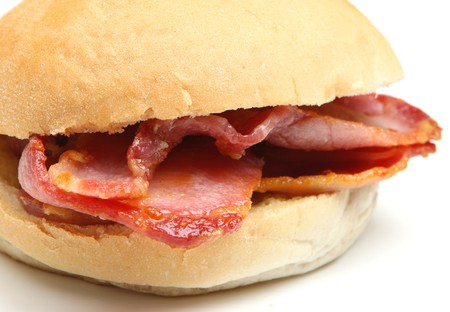 It’s a British breakfast staple, and go-to hangover cure for sure, but how exactly do the great British public make their bacon sandwiches?

New research on the bacon sandwich or ‘butty’ has found the best formula for making the perfect one. Following a survey of just over two thousand people, it turns out that the ideal bacon sandwich for Britons is made in the following way:

Bacon: smoked, and specifically, three slices of it.
Bread: A soft, fluffy, white bread roll is the most popular bread of choice for conveying the bacon safely to your mouth.
Sauce: It has to be the rich tangy spice of brown sauce.

44% of people said that brown sauce makes a bacon sandwich, compared to 36% who preferred tomato ketchup. 11% opted for no sauce at all, while a baffling 4% admitted to using BBQ sauce! What the hell?!

What do you call a bread roll?

Depending on where you are in the UK, a sandwich made from a bread roll will have a different name, and the survey found that in the south of England bacon bap or roll was the most common, which in the north west of the country, is called a bacon barm. The Midlands meanwhile opt for cob. North of the border in Scotland, it’s called a bacon bridie, buttery or rowie. Butty is a British colloquialism for any kind of buttered sandwich, particularly if the filling is a hot one, such as bacon or even better, a chip (French fry) butty.

How do you make yours?

So how do you make your bacon sandwich? Are you a fan of streaky or back bacon? Bread rolls or sliced white? And where do you stand on the whole brown vs red sauce issue? Let us know in the comments box below.

The research was carried out by IronmongeryDirect, as part of their nationwide hunt for Britain’s best bacon butty.