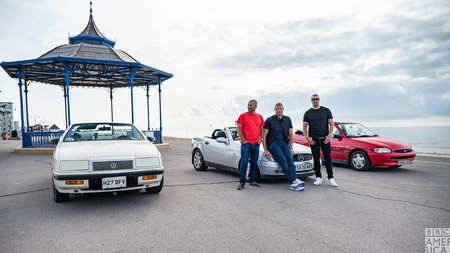 Who needs a holiday abroad when you’ve got the sunny shores of Great Britain? That’s what ‘Top Gear’ presenters Paddy McGuinness, Freddie Flintoff and Chris Harris thought when they drove from Bognor Regis to the Essex coast in series 28. Hop in the car and recreate their journey yourself with this whistle-stop tour. How hard can it be?

In series 28, episode 1, the Top Gear team were presented with a challenge: to spend £600 each – the average cost of a summer holiday – on a secondhand convertible and head to the seaside.

The three met in Bognor Regis, the UK’s sunniest seaside destination, where, after the usual arguments about their choice of car, they ended up with a Mercedes SLK, a Ford Escort and a Chrysler LeBaron. With the roofs down – and Paddy tucking into some candyfloss – off they set on their journey.

“Holidays – what do you do? You go somewhere you’ve never been before,” says Flintoff. “You wear clothes you’d never dream of wearing at home. You eat food you’ve never tried – and that’s the idea behind this. It’s a break from the norm – a chance to experience something new. Otherwise, you’ll just sit at home and watch Cash in the Attic.” 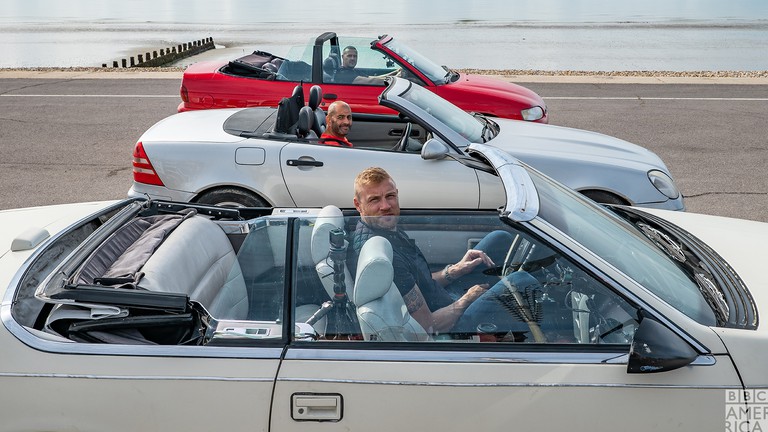 © BBC America
This is the starting point for your great British road trip: Bognor Regis in West Sussex. Sucking on a stick of rock, strolling along the pier, eating fish and chips, riding donkeys, browsing souvenir shops and building sandcastles – these activities are all part of the quintessential UK holiday, and you can experience them all here. Slap on your sunscreen, slide into your flip-flops and head to East Beach, Felpham or Aldwick for the best beaches in town. There’s loads more to do besides sunbathing – take a stroll around the Marine Park Gardens and Hotham Park, or visit the Picturedrome cinema that dates back to 1886 – but don’t forget that you’ve got a whole road trip ahead of you.
Open In Google Maps
Bognor Regis, England, United Kingdom
Visit Website
Give us feedback 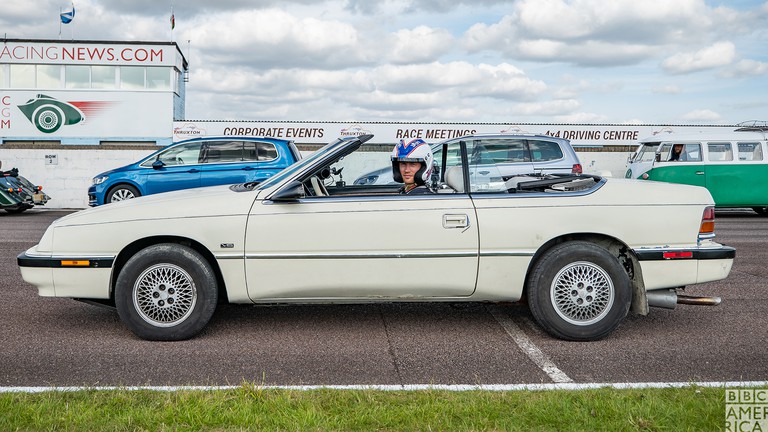 © BBC America
The trio headed northwest to Thruxton Race Circuit in Andover, where they raced among typical holiday traffic against the Stig. Spare yourself the hassle of a race – and your tyres, after Freddie’s wheel burst on the first bend – and book a track day experience or watch a race. If that’s not your idea of fun, you’ll be driving through the spectacular South Downs National Park to get to your next destination. The South Downs Planetarium and Science Centre in Chichester is the perfect stop-off for inquisitive minds. Petrolheads travelling in late June or early July should include a trip to the Goodwood Festival of Speed. The Kingley Vale and Butser Hill nature reserves are both great stops if you want to stretch your legs in the scenic British countryside. You can even visit the rhinos and cheetahs at family favourite Marwell Zoo.
Open In Google Maps
Thruxton Raceway, Andover, England, SP11 8PN, United Kingdom
Give us feedback 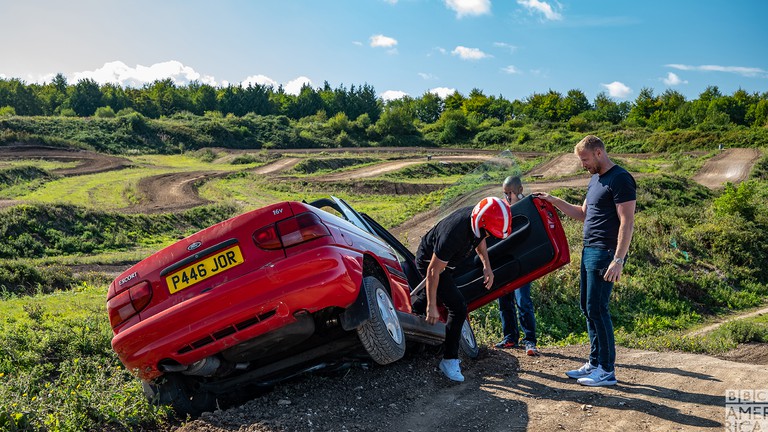 © BBC America
The Top Gear gang didn’t stop racing at Thruxton; instead, they headed 20mi (32km) down the road, towards the Route 34 motocross track, for an off-road race of sorts. The presenters were tasked with doing a timed lap around the track all the while lubricant was squirted in their faces. This time it was Paddy’s turn to fall at the first hurdle, losing control and almost completely rolling his Ford. A heads-up, though – you can’t drive your own car around the circuit as the presenters did. The city of Winchester is close by if you want to immerse yourself in history. Take a look at Arthur’s Round Table, visit one of the city’s many restaurants, cafes and pubs – the Royal Oak, dating back to 1002, is one of the oldest bars in Britain. You can even go and see the house (now a museum) where Jane Austen lived and wrote. If you would rather stay outdoors, the top of St Catherine’s Hill offers a spectacular view across Winchester.
Open In Google Maps
Winchester, Winchester, England, United Kingdom
Give us feedback 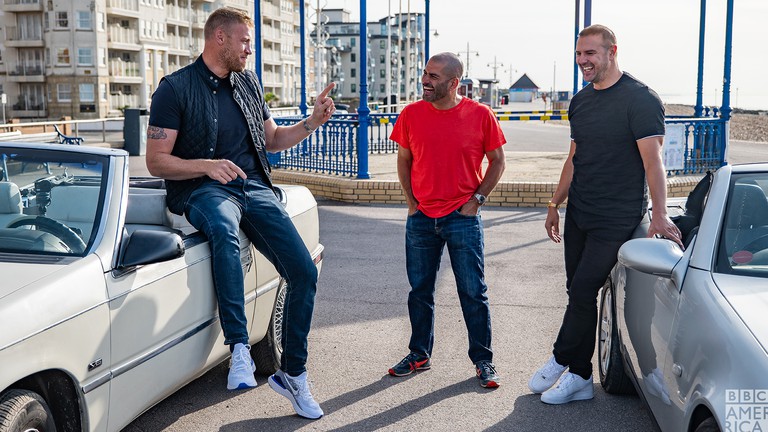 © BBC America
We wouldn’t recommend driving through a golf range with the roof down while balls are being pelted at you – especially not in a T-rex costume – as the Top Gear team did. However, you can book a session at the Silvermere driving range in Surrey to let off steam after a long day of sitting in the car. Alternatively, in the nearby Surrey Hills (an area of outstanding natural beauty), you can take the little ones to visit animals on Bocketts Farm, or take a tour around Polesden Lacey, an Edwardian country house and estate. For adrenaline junkies, Chessington World of Adventures and Thorpe Park aren’t far either.
Open In Google Maps
Redhill Road, Cobham, England, KT11 1EF, United Kingdom
+441932584300
Visit Website
Give us feedback 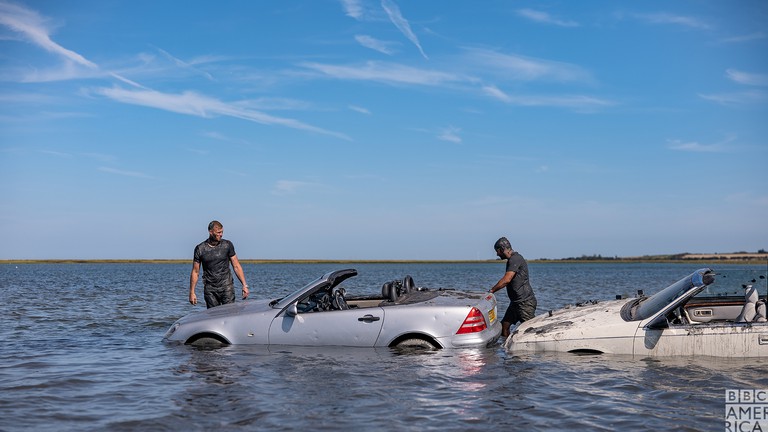 © BBC America
The final leg of the Top Gear road trip was on the Essex coast, with the gang attempting to drive across the Wade causeway to get to Horsey Island. This time, it was Chris who came a cropper first. His Mercedes screeched straight into the boggy marshland where it got stuck, until he was given a friendly push by Freddie, who took enormous pride as he yelled, “Everyone doubted the LeBaron! I could have got a Saab, I could have got an Audi TT, I could have…” Then, boom. He was also stuck. To save your car from ending up in the Wade, why not end your trip by exploring all the pleasures Essex has to offer? Chelmsford is home to loads of great restaurants, as well as one of the oldest buildings in the UK, the Chapel of St Peter-on-the-Wall, which is believed to have been built in 654CE. Mersea Island, part of Cudmore Grove Country Park, has beautiful beaches, plenty of cafes and its own museum. And don’t miss Talliston House in Great Dunmow, dubbed Britain’s most extraordinary home by The Sunday Times.
Open In Google Maps
Island Road, Kirby le Soken, Frinton-on-Sea, England, CO13 0EZ, United Kingdom
Give us feedback

If you’re not yet sold on the idea of taking a trip across the south of England, listen to the advice of Paddy, who describes the road trip as the “best holiday ever – it had everything: candyfloss, golf, a quick dip in the sea”. And, he added, “I’ve even booked us in again next year.” Maybe he said that tongue-in-cheek, but this British excursion would make the perfect alternative to fighting for a sunlounger in packed-out Magaluf.