Rebirth and Resurrection: Spring Myths of the Ancient World 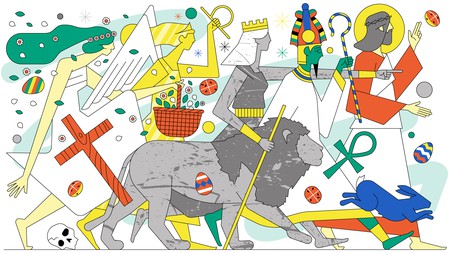 In the ancient world, the coming of spring was often linked to mythical tales of rebirth and resurrection. At the centre of these stories were a cast of fertility gods who share similar origin stories, and parallels with the Christian festival of Easter.

Springtime is celebrated with a diverse array of traditions across the world. Christians associate the season with Easter when they celebrate the resurrection of Jesus Christ. But the idea of a deity who perishes and is brought back to life was a common theme in the ancient world, predating the Bible. Spring mythology is often intertwined with the Earth’s cycle, meaning the stories feature fertility gods as the focal point.

The connection between rebirth, resurrection and spring can be tracked as far back as ancient Egypt and the god Osiris. Osiris was murdered by his rival Seth, who tore his body to pieces and scattered the parts across Egypt. The goddess Isis retrieved the pieces and buried them – an act that brought Osiris back to life to sit as judge in the underworld. His demise and rebirth speak to his dual role as the fertility god who gave life to plants and vegetation while controlling natural phenomena such as the annual flooding of the Nile.

During the pre-Christian period of the Roman Empire, people worshipped Cybele. The Cybele religion emerged from the area that is now Turkey and found its way to the heart of the empire with its deities absorbed into the Roman pantheon. Cybele’s companion was the god of fertility, Attis, who, as the legend goes, was sent mad and castrated himself under a pine tree just before his wedding. (These things happen.) Attis was subsequently resurrected and represents the crops and fruits that die off in winter and return in spring. The centrepiece of the Cybele Festival was a pine tree decorated with violets – the flowers that purportedly grew from the blood of Attis.

In ancient Sumer, modern-day southern Iraq, the goddess of fertility, love, war and sex was Inanna (also known as Ishtar). Following a doomed attempt to wrest control of the underworld from her sister, Inanna was killed and transformed into a piece of meat. When she was resurrected, she designated her capricious young lover to take her place in the underworld. The vague semblance between the words Ishtar and Easter has led to the former’s being supposed, most likely incorrectly, to have informed the Easter myth.

More plausible, but by no means definitive, is the idea that Easter is connected to the Anglo-Saxon goddess of spring and fertility and that the name is derived from hers, Eostre. The main source for this, however, is the Dark Age chronicler Bede the Venerable. Supposedly, Eostre was symbolised by a hare, but it wasn’t until the 17th century in Protestant Europe that the floppy-eared animal became embedded in the Easter tradition. Eggs, on the other hand, have featured in the celebration since around the 13th century. Eggs were forbidden by the church to be consumed during Holy Week, so any laid during that period were deemed holy. The egg became a symbol of Jesus’s resurrection, but the son of god has become a forgotten figure in his own story with the conflation of these two elements. Today, children gleefully celebrate the annual coming of a bunny rabbit that, in flagrant disregard of the laws of nature, lays chocolate eggs for them to discover and consume.