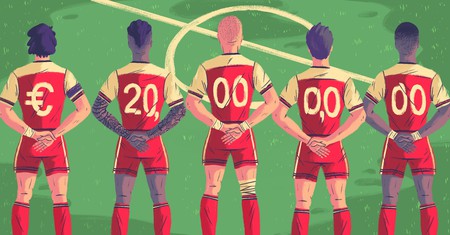 Covering the secret details of player transfers, the role of agents and the clandestine dealings at the very top of major clubs, Rafael Buschmann and Michael Wulzinger’s book delves into the shady world of modern football. Read an extract from Football Leaks below.

[dropcap]T[/dropcap]here you are, a newcomer to the business. And there he is, the president of Real Madrid. You want to sell him a player. He probably gets offers like this every day; you’re one in a crowd. So what’s your plan? You try to use the oldest incentive in the world: sex.

On 7 August 2013, Real Madrid played a friendly against Chelsea in Miami. It was the finale of the International Champions Cup, the real prize of which was not some brewery-sponsored silverware but a couple of million dollars in appearance fees. But for Doyen Sports, the ambitious newcomer in the trading of football players, this was the game of the season. A game, indeed, that wasn’t decided on the pitch but in a luxury hotel suite the night before.

One year previously, Doyen had spent a modest sum acquiring transfer rights to a player under contract to Spanish side Sevilla: Geoffrey Kondogbia. If another club offered €20 million for him, Sevilla would have practically no choice but to sell – such were the terms of the contract – and Doyen, too, would cash in. It was a great piece of business for the company, so Doyen was desperately looking for a club prepared to pay €20 million for Kondogbia. And what better opportunity to kick-start such a deal than a summer exhibition match in Florida watched by a bored Real Madrid president Florentino Pérez? As chance would have it, the Arif clan behind Doyen happened to own a 650-squaremetre villa on nearby Fisher Island, a private playground for the super-rich.

On 6 August, Doyen Sports boss Arif Arif received several WhatsApp messages from Nélio Lucas describing how he had showed club presidents, including Pérez, a good evening: “I’m in Miami … Yesterday was amazing … I took few presidents out and even Florentino came with us … Very funny. He removed his tie and danced.” They had gone to a Miami Beach nightclub called the Mokai Lounge, which is known for dancers and female bartenders whose work outfits leave little to the imagination.

The party was to continue the next day in the apartment on Fisher Island. “I want to bring some girls to be with us,” Lucas wrote, asking if he could trust a woman named Violet to ‘organise’ the girls in question. “Never met her bro,” responded Arif. “Do what u have to.” He asked that Lucas take down the photos on the walls and lock his father’s room. Lucas said that he was thinking of giving that room to Pérez. Arif wrote back: “For 20 million : ) For Kondogbia.” Lucas responded, “That’s why we need to look after him.” There’s little doubt about what was going on in the house, regardless of who exactly was involved. At one point Arif brags about his own room in the house, “A lot of girls have been fucked in that room.”

The next evening Lucas wrote, “Took real madrid directors and Florentino to the house last night … Probably also today.” But he also had disappointing news: Real was only willing to pay €15 million, not €20 million – a sum insufficient to force Sevilla to sell. “I’m killing my balls to find someone to pay the clause of Kondogbia,” Lucas promised. Three weeks later, it was French side Monaco, and not Real Madrid, that would pay the requisite €20 million. Doyen turned the kind of profit on the Kondogbia transaction that is more commonly seen in a drug deal, earning a 524 percent return in 13 months. And getting to know Pérez apparently also benefited the company, if in a different sense. A short time later, Lucas would boast that his connections to Real Madrid were “more solid than titanium.”

Pérez himself said with reference to the alleged ‘sex party’ that he didn’t meet anyone on the night in question. He said that he had gone to a nightclub – presumably the Mokai Lounge – and that any one of the hundreds of patrons there might have taken pictures of him. But Pérez denied anything further, saying that there was no meeting with anyone else and no party. He also denied that Real Madrid had ever been interested in Kondogbia or that anyone had offered him the player, adding that to the best of his knowledge, Real Madrid had never worked with Doyen Sports.

It is noteworthy, however, that in a page since deleted from Doyen’s website, Pérez was quoted as saying that “Real Madrid … recognizes that Doyen was and is important for Spanish football and must highlight their professionalism. Our experience with them in other subjects is immaculate.” When asked about this quote, he replied, “I can’t say why in its webpage is quoted a phrase like the one you mentioned, that I don’t remember to have ever said.”

The exact details of that evening’s events will never be known to anyone other than those present. There is no evidence in the WhatsApp conversation about whether Pérez accepted any offer made by Lucas or participated in any sexual adventures. It’s possible that the sports director was merely trying to impress his boss back home; although despite Lucas’s bragging, there is no indication that Pérez was influenced in any way.

What is not in doubt, however, is how the case of Doyen illustrates the ways in which money from nebulous sources can force its way into a legitimate industry. Although hardly anyone in the public at large knows about Doyen, it earns its money through some of the biggest names in sports. The company markets Neymar, the most expensive player in football history, as well as the highest-paid ex-player, advertising icon David Beckham. Its clients also include the world’s fastest man, Usain Bolt, and German tennis legend Boris Becker. Doyen not only owned a piece of the €20 million Kondogbia, now at Inter Milan, but also of the €30 million Eliaquim Mangala (Manchester City) and the €40 million Radamel Falcao (Monaco).

Football Leaks possesses numerous documents that illustrate Doyen’s business practices and help explain the company’s meteoric rise. These documents reveal what lies behind the carefully polished corporate facade: lies, a secret fund, one-sided contracts that force clubs to sell players, and shell firms behind which Doyen continues to conceal itself. The London-based company has become a symbol within the world of football. On the surface, everything is gleaming and nice, while the dirty reality is located below, in figures, contract clauses and agreements. Doyen is football today, and football today is Doyen.