How Radiohead, Hans Zimmer Captured the Feeling of Ocean Waves in Song 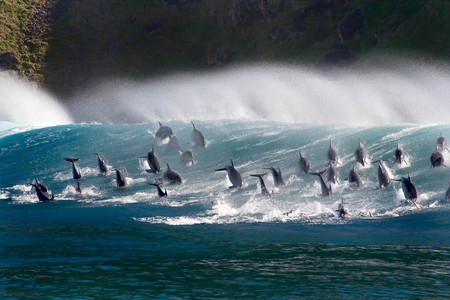 BBC unveiled the collaborative track, “(ocean) bloom,” between Radiohead and Hans Zimmer for its upcoming Blue Planet II series yesterday, and today we’ve received a deeper look into how they transformed an experimental rock song into a soundtrack for the ocean.

A reimagining of the legendary rock outfit’s King of Limbs‘ opener “Bloom,” a new Vox video dives into the finer details of the song’s construction. Interestingly enough, they found their inspiration in pointillism, a painting technique in which tiny, separate dots form a larger image.

As Zimmer begins to speak on pointillism’s influence, Thom Yorke quickly interjects with, “I used to draw exactly that. After going surfing, I would do exactly that,” a thing only Thom Yorke would say.

Delighted by their “consensus,” Zimmer explains how they started by employing a new technique in which they instructed the orchestra to start playing “tiny fragments of sound.” Employing only one note, a vibrant musical environment is magically created thanks to the simple rule that each player stagger their notes with those around them.

“Just look at at whoever’s sitting next to you, let them swell in their note, and you get these beautiful waves,” Zimmer explains. “And, for a moment, the individual player is heard and then sinks back into the mass.”

“If you stare at the ocean long enough, that’s exactly what it does,” Yorke adds.

This method is referred to as “tidal orchestra,” and it can be heard throughout the song.

The video then goes on to discuss the song’s aleatoric, when a part of a composition is left up to chance or to a player’s discretion, nature. Interestingly enough, this was already in effect in the original version of “Bloom,” as demonstrated through Yorke’s piano riffs and loops.

“It’s interesting how such a small scale thing that Thom was doing, you [gestures at Zimmer] were subconsciously doing the same thing,” Jonny Greenwood says. “But as soon as you have an orchestra involved the complexity of that, all these players playing together, that’s a glorious thing, and there’s no sound like it. I think that’s why it sounds so vital.”