Own Your Monster: The Psychology of Supersize, and What Maximalist Fashion Says About Us 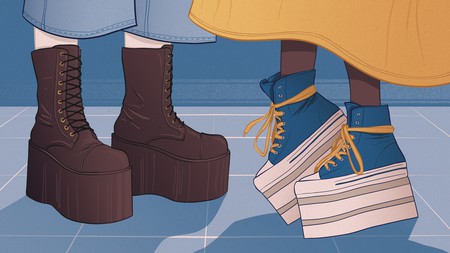 Culture Trip examines the maximalist trend, and what it says about our contemporary consciousness.

‘I think of what Rei does as ideas given shape,’ said Vanessa Friedman, Fashion Director of The New York Times, in conversation with the curator of the Comme des Garcons exhibition at The Met, Andrew Bolton, and Rei Kawakubo’s husband, Adrian Joffe. Only one of two designers to have been celebrated thus while alive, Rei Kawakubo is certainly revered for her imaginative, avant-garde designs in which human form is exaggerated; the body is exploded into something urgently new, and big. Indeed, the timing of this exhibition coincides with a maximalist trend in fashion more widely. Throughout the Spring/Summer 2017 and Autumn/Winter shows, oversized coats, hoods, trousers and sleeves were ubiquitous on both sides of the Atlantic. Granted, almost all physical objects could be said to be an idea given shape in some form or another. However, this new trend pushes an artistic, non-functional style into the mainstream. A new cultural phenomenon is certainly afoot, but what does pursuit of the supersize mean as a reflection of our contemporary consciousness?

An expansive philosophy for millennial minimalists

Big things occupy more space. In an age where housing crises are plenty, and green spaces few, the design of clothes that take up more room provides an interesting contrast to problems that ‘millennials’ face in grounding themselves in the world through larger things such as houses, cars and so on. Whether it’s supersize sleeves, as peddled by Portuguese duo Marques’Almeida, wide-leg trousers (the new ‘it’ style of denim as promoted by Christopher Kane, Chloé, Rejina Pyo and many more), platform shoes (Marc Jacobs is offering impossibly high versions) or power hoods – in the style of HÆRVÆRK at Copenhagen Fashion Week – perhaps maximalist dress is a means of laying claim on more of the world when other material desires are not attainable. After all, millennials apparently love experiences over possessions, and dragging your bell sleeves through over-crowded tube carriages, or trying to avoid dipping them in your Instagrammable brunch, or clinging onto your oversized coat, worn Vetements-style off-the-shoulder as you run for the bus, is one of the more adrenaline-filled, uncomfortable and irritating events to live through.

A new culture of monsters

Maximalist dress certainly disrupts the environmental balance; it lends more metaphorical Yin without offering the proverbial Yang. Power shoulders, as promoted by designers such as Tibi, Mary Katrantzou and Marques’Almeida, enormous puffer trousers by Tonsure, or oversized coats with commanding lapels from Simone Rocha or Burberry – these are just some examples of the ways designers are exaggerating and super-sizing the body, working against rather than with it.

It’s a trend that, as essayist Charlie Fox notes in This Young Monster, is ubiquitous in contemporary culture: ‘The abundance of monsters in circulation now proves that the collective imagination is in a strange and disorientated state,’ he notes, adding that we are ‘at once fearful of what can be done to the body through technology or trauma and fascinated by the possibilities those changes represent’. Therefore, the move of designers to distort the human body reflects the wider contemporary consciousness that similarly has brought us TV shows such as Stranger Things and American Gods. Fox later adds: ‘a monster is fear assuming a form’, which reflects Friedman’s assertion that Rei Kawakubo’s work is ideas given a shape. Read in this context, maximalist design embodies an absurd, chaotic and dystopian vision; it is the Leviathan monster breaking an orderly contract.

Large-scale sculptor Barbara Hepworth also noted that her works were ideas made flesh: ‘Full sculptural expression is spatial – it is the three-dimensional realisation of an idea, either by mass or by space construction. The materials for sculpture are unlimited in their variety of quality, tenseness and aliveness. But for the imaginative idea to be fully and freely projected into stone, wood or any plastic substance, a complete sensibility to material – an understanding of its inherent quality and character – is required.’ In short, she believed in using maximal design to create harmony with the environment, that for her designs to work the material had to embody the idea, and the idea had to be at one with the environment.

As she also noted: ‘There must be a perfect unity between the idea, the substance and the dimension: this unity gives scale… Vitality is not a physical, organic attribute of sculpture – it is a spiritual inner life.’ However, unlike Hepworth, contemporary fashion designers – by nature of the environment they are designing for, the body – cannot achieve harmony in the same way, and instead must wrestle with conflicts of texture and form. Most recently this was illustrated at the J.W. Anderson Disobedient Bodies exhibition at Hepworth Wakefield. Here, similar shapes rendered in the gallery and on the body engendered different results. The sculptures present harmony; the clothes – which can never be fully organic, they must have ends and holes for arms and feet – present a new, disproportioned body.

If you look back through the canon of fashion history, supersize has often been a reflection of a dystopian vision of society, and the human beings in it. In the early 90s, Alexander McQueen’s AW collection for Givenchy in 1997 saw the designer adorn models with animal skulls. ‘My idea,’ he told Numero magazine in a 2002 interview, ‘was this mad scientist who cut all these women up and mixed them all back together.’ For his 2001 Vos show, McQueen similarly employed taxidermy animals and extreme silhouettes to re-create a mental asylum. More recently, Gareth Pugh took audiences deep underground to immerse them in a disquieting and gothic show that showed black-eyed models in billowing, oversized black garments walking a concrete promenade to a jarring soundtrack of Trump’s voice and Mary Poppins soundtracks. During his now legendary 1989 show, the famously reclusive Martin Margiela walked models with oversized saddle bags, dressed in huge swathes of plastic and wrapped in layers of material, setting a precedent for the great, disruptive approach to fashion that followed. ‘They looked so angelic and alien,’ noted Raf Simons of the models at the show to Business of Fashion.

‘Anything can be considered a space – and in theory fashion exists within most. There are idealised, utopian spaces such as fashion magazines and the cinema screen, which we may then experience within an incidental space such as the cinema or a café,’ notes Clare Green in her essay ‘Re-thinking fashion spaces’. And she flags an interesting dichotomy: as a creation to exist in art, oversized clothes do not feel intrusive or monstrous. They can be seen as experimental or adventurous. However, fashion exists in the everyday, and when you re-locate clothes to real life, the jarring, dystopic element is realised.

In inviting the extreme into the everyday, in inviting wearers to exaggerate and play with shape and style, one might conclude that fashion is inviting us to own our own monsters; to occupy what is frightening, as well as take charge of the space around us. Read in this way, maximalist style becomes empowering – though perhaps only for as long as you stay upright in your 20-inch platforms.