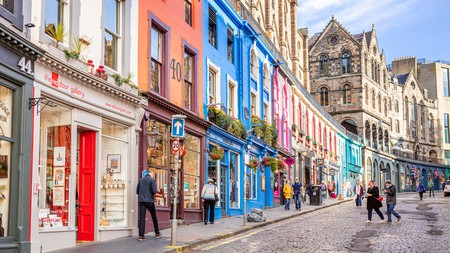 There’s no need to take to the hills to hit your hallowed 10,000 steps – Britain’s great northern cities have dozens of cool walking trails to conquer this autumn.

Discover myriad quirky facts, curious landmarks and uber-cool pop art and culture in these lively northern cities, all connected by TransPennine Express, as we uncover awesome urban adventures just moments from the train station. From the Instagram-worthy street art of Liverpool’s Baltic Triangle and the not-so-ghoulish ghost signs of Glasgow, to the quirky owl trails of Leeds city centre, these seven city walks are well worth a wander. 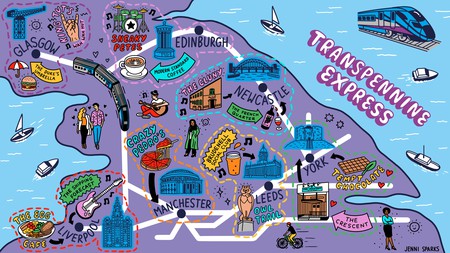 Hop off the train at Lime Street and it’s an easy 20-minute stroll to Liverpool’s bohemian Baltic Triangle, where you’ll find the best in British street art. From Paul Curtis’s turquoise Liver Bird Wings on Jamaica Street to Akse’s homage to Liverpool Football Club manager Jürgen Klopp, Liverpool’s street-art scene offers the perfect ‘gram shot. Spot the tribute to Stephen Hawking on Parliament Street, or grab a selfie with the Fab Four in the Baltic Market; Curtis’s large-scale Beatles mural commemorates the 50th anniversary of the Sgt Pepper’s Lonely Hearts Club Band album. And don’t miss Silent Bill’s tribute to Banksy on Jamaica Street, a sly dig at those who have sold off Banksy’s artwork to private collectors. 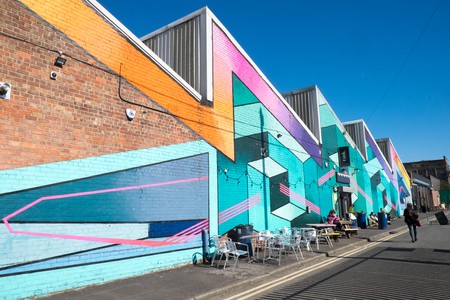 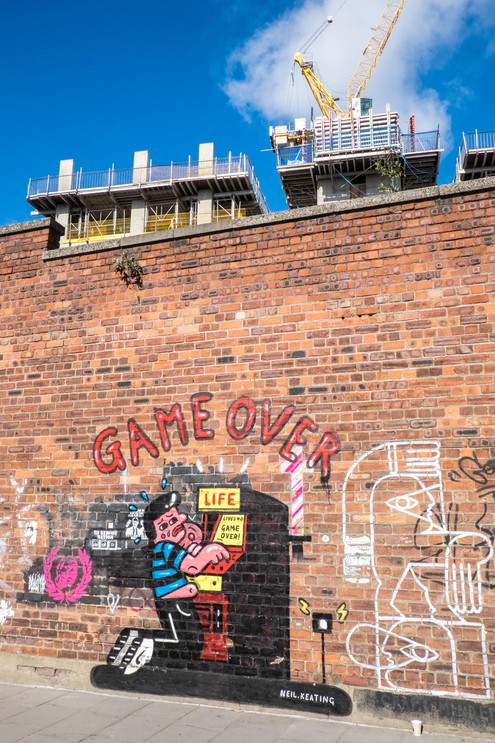 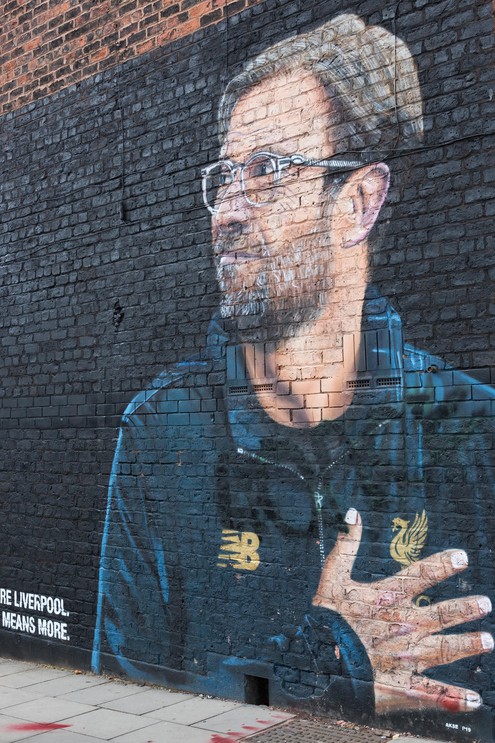 From Captain America to Sherlock Holmes, Manchester is a movie maker’s dream. This self-guided walking tour starts at Manchester Piccadilly station and heads north to Dale Street in the Northern Quarter, where the pre-war architecture and towering red-brick buildings are a doppelgänger for 1940s New York. Around the corner, travel back to 1919 and the slums of Birmingham, where the shootout scenes of Peaky Blinders were filmed on Mangle Street. From here it’s a short wander over to Lever Street, which was transformed into Victorian London for the 2009 movie Sherlock Holmes. After winding past the Old Granada Studios, home of Coronation Street, and the Midland Hotel, where Cold Feet was shot, the tour ends among the pubs and clubs of Canal Street, the iconic backdrop of Queer as Folk.

Now to pay homage to the official emblem of Leeds on the Leeds Owl Trail. Pick up or download a free map and take yourself on a self-guided walk in search of the city’s 25 feathery head-spinners, from the shiny gold Civic Hall owl to the Yorkshire Penny Bank owls. There are two official trails, both less than 10 minutes’ walk from Leeds main station – the Civic Owl Trail starts at Millennium Square and takes in the Town Hall and the Central Library, while the Grand Owl Trail winds through South Parade to Leeds Minster and Kirkgate Market. Easy to conquer together, they run for about 2mi (3.2km) and take around two hours to complete. Plus, the city is easy to reach via direct train from many Northern cities.

Known as the longest medieval walls in Britain, the best way to admire these old Viking stomping grounds is via an elevated walkway located 10-minutes by foot from York train station. Built in the 13th century, the magnesian limestone walls are accessed by four “bars”, the fortified gateways to the old city. Most folk start at Micklegate Bar, the main entrance to the walled city, where for centuries the severed heads of traitors were displayed as a warning to foes (fear not, the spikes are currently empty). Follow the brass studs, which will guide you around the fortified city walls, cross over Lendal Bridge to see the remains of the old railway station, and finally up to Museum Street where you can witness the epic York Minster in all her stained-glass glory. 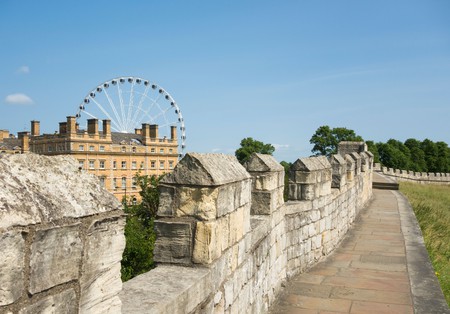 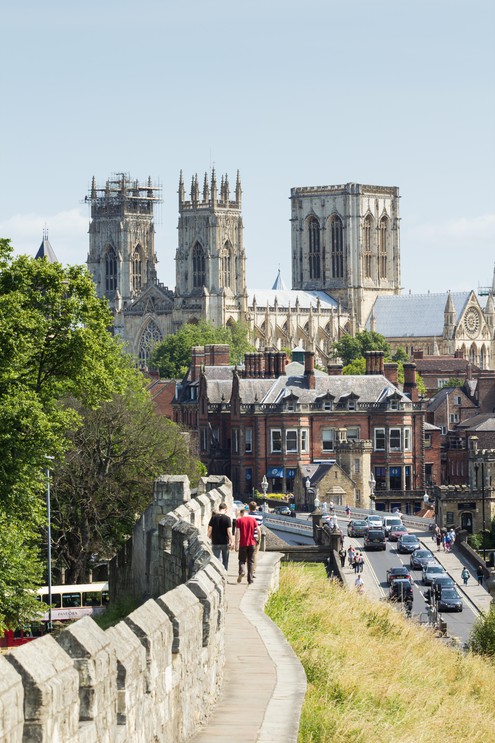 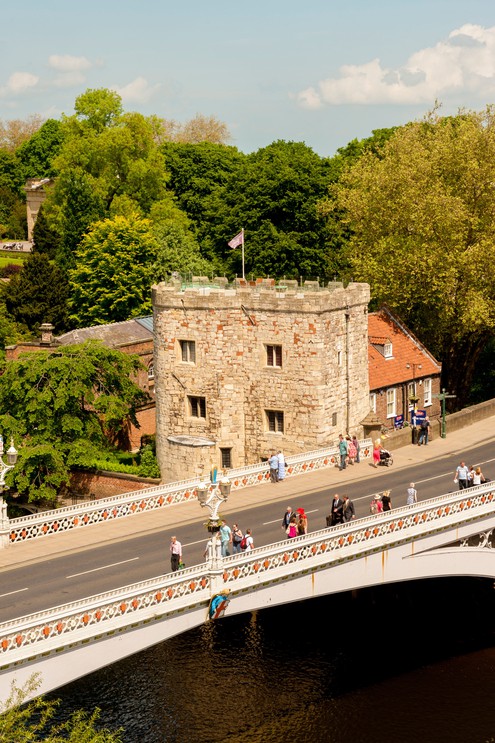 This easy 1mi (1.6km) art trail is centred around the city’s three main bridges; the Tyne, the Millennium and the Swing Bridge, all of which can be seen as the train glides into Newcastle station. Kick off at the Sage Gateshead and see the technicolour Ribbon of Colour, a 200m-long (656ft) glass balustrade by architectural glass artist Kate Maestri, and Star Ceiling, a lighting installation of the night sky by Jo Fairfax. Cross over the Millennium Bridge – also known as the Winking Eye – for a selfie with Siren, André Wallace’s bronze torso of a sea siren, who, according to Greek legend, lured sailors to their deaths with the beauty of her singing, and the partner piece, River God, which depicts a male torso.

Back in the 1900s, Britain’s cities were awash with hand-painted adverts displayed on buildings. Now largely relegated to vintage newsreels, faded ghost signs offer a rare glimpse into Britain’s past advertising industry. Embark on a Ghost Signs of Glasgow tour by picking up or downloading a free map and take one of three self-guided tours through the city centre, the West End or the East End. Gems include the Elbow Room, a 1950s cocktail-lounge sign found above the Titwood Bar, the Typewriter Repair Co on Oswald Street and the Argyll Arcade, the oldest shopping mall in Scotland, which has an elegant gold mosaic sign from 1904.

Awash with ornate Gothic architecture, polished cobbled lanes and medieval turrets, Auld Reekie has long been a pilgrimage for Harry Potter fans. Immerse yourself in the wizarding world on the Potter Trail, a self-guided walking tour of Edinburgh’s Old Town, just a few hours away by direct train from Manchester. Start at George IV Bridge and Greyfriars Bobby, the statue of a faithful terrier who guarded his owners grave until he died, then wind around other key Potter sites, including Greyfriars Kirkyard, the cemetery where Lord Voldemort’s namesake is buried, and Victoria Street, whose witchery, knights’ shop and joke emporium inspired Diagon Alley. Finish up with a frosty butter beer in the Dog House pub on Clerk Street. 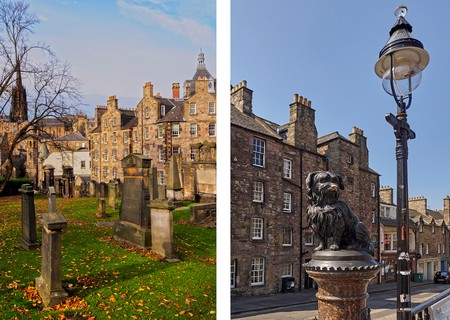 Travel with TransPennine Express for a relaxing journey that will transport you directly to your city centre of choice. Save over *50% on train travel when you book your tickets in advance at tpexpress.co.uk.