Meet the Female Athletes Who Compete in Hijab 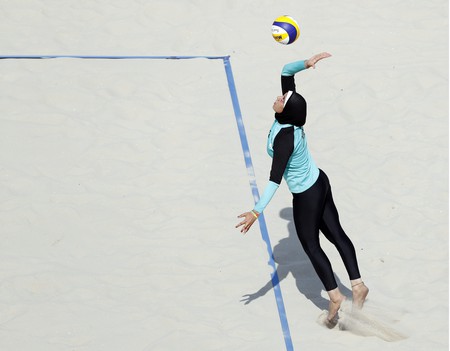 The small number may be gradually increasing, but it remains alarming how few female athletes compete — or are allowed to compete — wearing a headscarf. The reality is that for many Muslim women, what they wear can actually affect their ability to compete.

For over a decade, sportswear manufacturers have produced sport-specific hijab, with the likes of Capsters, Friniggi and Mu’mine leading the way, and Nike’s recent launch bringing the garment to a far wider audience, but limitations still exist. FIFA, the world soccer federation, had a ban on hijab and other head coverings until 2014, but have since softened their stance, while FIBA, the international basketball federation, still implements a ban.

That said, there are female Muslim athletes across the globe competing at the highest level, and doing so in headscarves and hijab.

Elghobashy, along with Nada Meawad, make up Egypt’s beach volleyball duo. In a sport in which competitors normally compete in tiny two-pieces, the 2016 Rio Olympics saw the Egyptian pair in long sleeves and pants, with Elghobashy also wearing a hijab. Before the Olympic Games in London, the international volleyball federation (FIVB) had to relax their uniform regulations to make them more inclusive, allowing hijab to be worn. Four years later, Elghobashy became the first in her sport to do so.

Born in New Jersey, Muhammad, was a member of the United States fencing team at the last Olympics, becoming the first American athlete to wear a hijab during competition at the Games. Muhammad competed in the sabre, going out in the second round of the individual competition, but managed to win bronze in the team event. Winning a medal for her country wasn’t enough, however, to stop her being detained in U.S. customs later in the year.

At Rio 2016, in the 69kg weight class, Egyptian Ahmed became the first woman from an Arab country to win an Olympic medal in weightlifting. Similarly to volleyball, the International Weightlifting Federation changed its uniform ruling in 2011, allowing Ahmed to compete in her headscarf. Historically, Egypt has strong weightlifting traditions, with male athletes winning Olympic medals in the 1930s and 40s.

At the Rio Olympics, Zenoorin, 18, became the first female athlete from Iran to win an Olympic medal. Iranian female athletes are allowed to compete at the Olympics as long as they wear a headscarf and do not have to wear lycra or a tight-fitting uniform, although they are not allowed in sports stadiums in their home country. In Rio, Zenoorin beat Sweden’s Nikita Glasnovic 5-1 in the third-place playoff to secure a bronze medal. 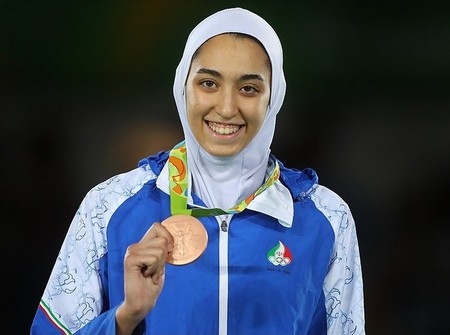 In Rio, Wahba competed in her second Olympic Games, four years after representing Egypt at London 2012. The taekwondo fighter won a bronze medal in Brazil in the 57kg category, following her quarterfinal showing in London. Wahba took up the sport as a 6-year-old, following in her older brother’s footsteps.

Despite growing up in the UAE, where the mercury can tip over 40 degrees Celsius, Lari took up skating at 12. Along with her family, Lari started and run the country’s first skating club, which now boasts over 100 members. During competition, Lari wears darker, thicker leggings, as opposed to the usual skin-colored offerings traditionally on show. Lari is currently aiming to become the first athlete to represent the UAE at the 2018 Winter Olympics in South Korea.

Attar became the first female Saudi Arabian athlete to compete on the track when she ran the 800m at London 2012. Dressed in a hijab, loose-fitting training track top and full-length jogging bottoms, Attar holds both Saudi and U.S. nationalities, and went to university in California. She became the first woman to represent Saudi Arabia in athletics after the country’s Olympic Committee overturned a ban on women competing.

Like Attar, Shaherkani benefitted from Saudi Arabia’s change in ruling regarding women at the Olympics and became the first woman from her country to compete in the Olympic Games. The 16-year-old went out in the first round, but was competing against black belt athletes, despite at the time of competition only holding a blue belt herself, two grades below. In her home country, girls are not allowed to do physical education in school, attend a sporting event or join a club or team, making her appearance all the more inspiring.