Lucy's Long Walk: Meet the Woman Aiming to Trek the Length of the Earth 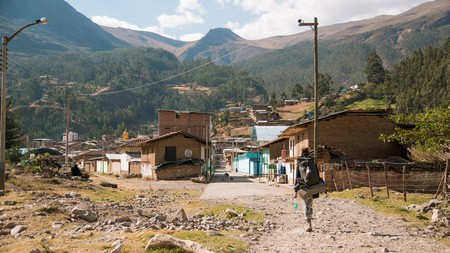 After three years of walking, Lucy Barnard was halfway to achieving her goal of being the first woman to walk the length of the earth when Covid-19 hit. While she has had to put this on pause and return home to Australia until the pandemic passes, she still aims to return and finish her expedition. Culture Trip catches up with her, 6,000 miles into her journey, to discuss her journey so far and her plans for the future. 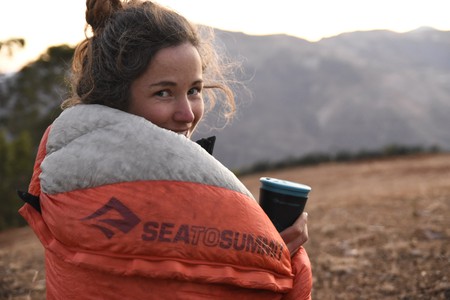 Lucy Barnard was in Patagonia in 2015 when she heard a story about the British adventurer George Meegan, known for his unbroken walk from the most southern tip of South America to the most northern point in Prudhoe Bay, Alaska. It took him six years, from 1977 to 1983.

To this day, he is the only person to have walked the 19,019mi (30,608km) length of the planet unbroken and 37 years since he completed it, no woman has ever succeeded in this journey. Lucy, now 38, decided this needed to change. 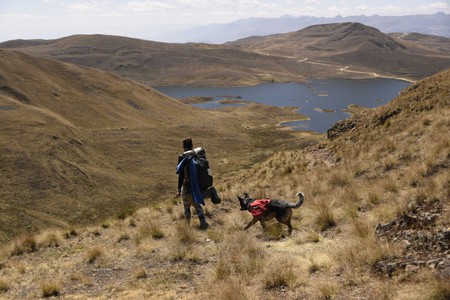 Five years later, Lucy is on the way to achieving that goal. Setting off from Ushuaia, in Argentina, on 4 February 2017, it took her more than three years to reach Colombia in March 2020. She has so far walked a third of the distance and travelled through five countries – Argentina, Chile, Peru, Ecuador and Colombia. Her motive for the adventure remains largely unchanged since that time in Patagonia. 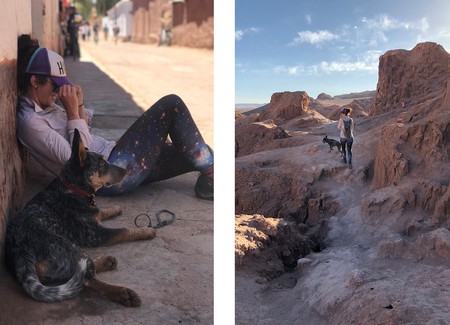 Lucy and Wombat, the Australian cattle dog who joined her a year into the trip | | Courtesy of Lucy Barnard

Lucy’s motive for pursuing her dream is to prove to her nieces that they can aspire to be, or do, anything. And she wants to prove that women are just as capable as men. “In the past I’ve had problem with men telling me that I can’t do something, so that really started a fire in my belly,” she says. “From there it was just logistics.”

For many, the journey might seem impossible, from the physical exertion to the total solitude. But Lucy has come to terms with the intense isolation that comes with being alone with your thoughts – just her and the road. 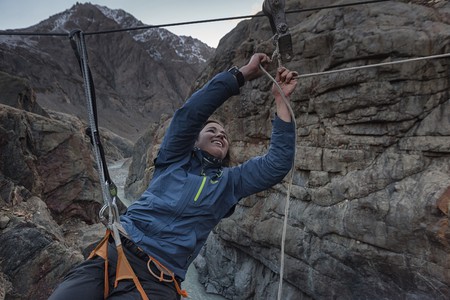 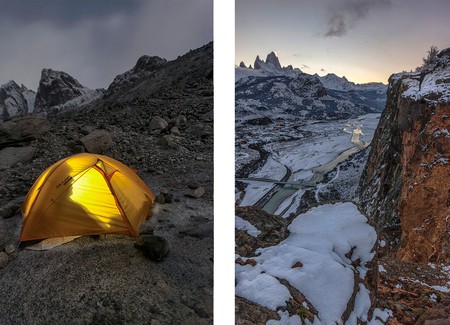 Lucy is, however, no longer solo in her journey. A year into the walk, she adopted an Australian cattle dog named Wombat. “I walked for a year before I got him, and that was always my intention, as I wanted to make sure I was committed to the expedition first,” she says.

“Four people a year start this walk and typically everyone quits within the first year.” Wombat is a high-energy dog and the two share food while on the road. But he also helps provide security in terms of a warning bark when people are near and – arguably most importantly – helps ease the effects of being alone. 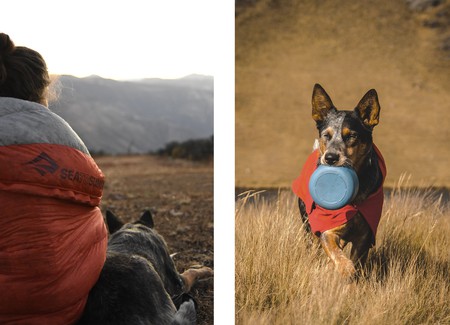 Lucy and Wombat in action. The dog helps lessen the negative impact of her isolation | | © Danyal Taylor

Lucy has to be cautious. Travelling alone can be extremely dangerous, and she takes as many steps as possible to avoid potentially threatening situations. “Because I am very conscious of being safe, I will always turn up to a town very early in the morning when anyone who has been drinking is in bed, but before too many are out and about so that I’m going into an environment that’s as safe as possible,” she says. “At night, when I’m camping in the middle of nowhere, I never use my torch and never have light after the sun goes down. So I’ll be asleep by 7pm, get up at 4am and walk by 5am or 6am.” 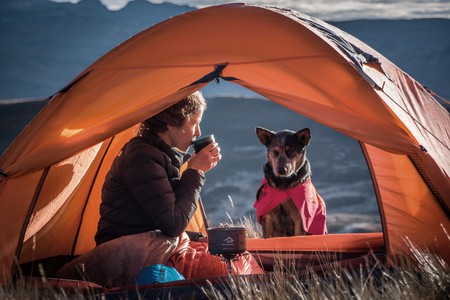 Lucy and Wombat preparing to start the day | | © Danyal Taylor

While many may believe travelling alone as a woman, particularly in remote areas, may bring an extra layer of danger, Lucy has found her gender beneficial in many situations. “When I walk into a town and families or women in particular see that I’m on my own, I get adopted very quickly. If I do need assistance, people are far more open with me than they would be with a man.” But Lucy is aware of the dangers and says she’ll be using her time while at home in Australia to brush up on self-defence. “You can’t deny that there are very real risks of being a single female anywhere in the world,” she adds. 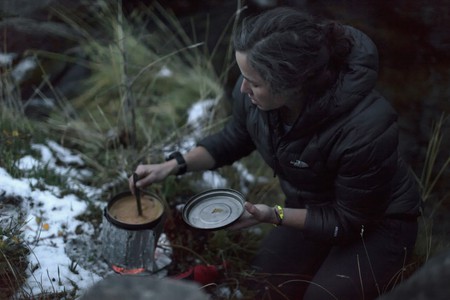 As her journey has gathered momentum, Lucy has won fans from all corners of the world, taking her trip from a personal goal to one that has support from thousands of people. With that added fanbase comes an added pressure not to give up.

Although – that is a hurdle she overcame long ago. “There was a moment when I decided to quit, and it took about a month to get back onto the road,” she says. “A man called Albert caught up with me at that point. He was doing the same walk, and had been working really hard to catch me up. I told him I had boils on the back of my feet and I was done with suffering, and I didn’t want to go any further.

“He convinced me to keep going, but as soon as he did that, I kept going and he didn’t. He quit.” Lucy is still in touch with Albert, who went on to become a professional alpine climber.“That’s actually one of my dreams, so it’s really nice we get to see each other living out each other’s dreams – it’s like we’re living parallel dreams.” 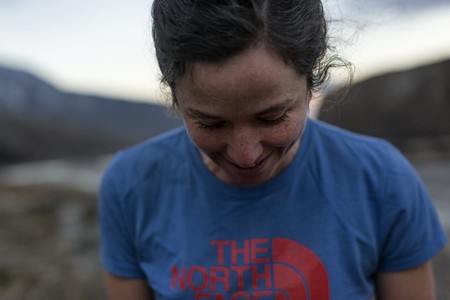 Having overcome the decision to quit, it gave Lucy a renewed sense of purpose. Describing it as a weight off her shoulders, she says that walking every day was “an extra bonus”. She also realised she still had a choice, and that her supporters would understand if she couldn’t go any further.

“Now I have so many letters from children who love my story and want to ask a little question,” she says. “Sending those email [replies] really does give me a reminder of why I’m out there in the first place.” 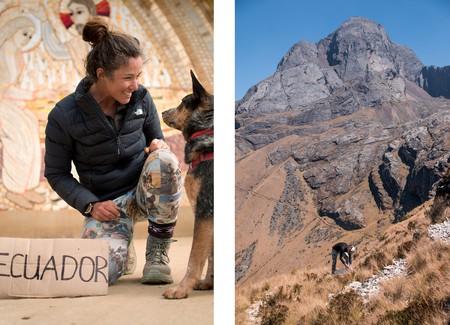 Left: Lucy and Wombat in Ecuador | Right: Qhapaq Ñan, the Great Incan Trail, in Peru, with the 500-year-old road in the distance | | © Danyal Taylor 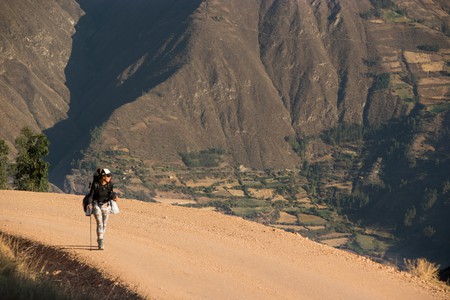 Anyone who talks to Lucy would be struck by her tenacity and pragmatism. She doesn’t see this journey as anything more than what it is; she is open and honest about the lessons she’s learnt along the way and the hardships she has overcome. She doesn’t glamorise it – to her, she is simply walking the length of the earth.

Yes, it’s hard, but it’s not impossible – well, at least for her. Friends have joined her along the way, some for one day, some for longer, often underestimating the sheer magnitude of what she’s doing. “People don’t understand how hard this is,” she laughs. “Many think I’ve kind of just got the wind blowing in my hair and that I’m accidentally walking the length of the world.” This perception is quickly changed once they join her. She describes one friend commenting on her journey who said “No one could keep up with you.” 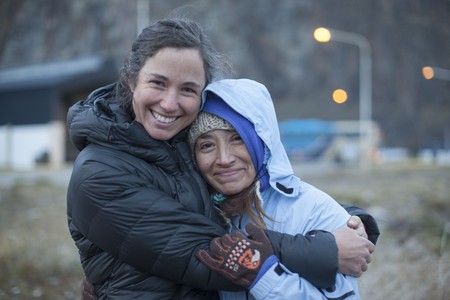 Lucy with a friend during her journey | | © Andrea Torselli

When Covid-19 hit, Lucy had just crossed into Colombia, where she ended up having to go into lockdown for a month and a half. During this time she and Wombat were only able to leave their room twice a week to get groceries. It was shock to them both, and a stark contrast to their previous routine.

For both of them, used to their freedom and movement, this confinement came with its struggles, and ultimately the risk of staying was too high. “When I started hearing that people were starving I decided there were too many unknowns and too many variables that could escalate quickly when I wouldn’t be able to leave. At that point I decided to come home.”

Unable to get the appropriate permissions for Wombat to travel back to Australia with her, Lucy found an incredible dog trainer in Colombia who is able to care for Wombat until she returns. After a 20-hour car journey, five flights and many days, Lucy finally made it home on March 21. 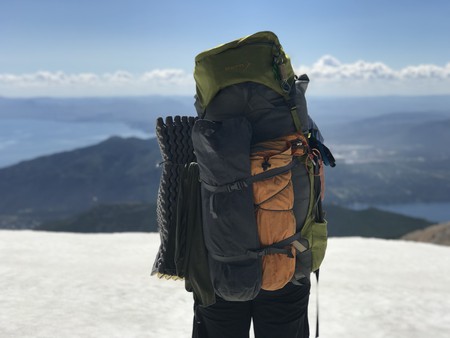 While there are many uncertainties about the current situation and when the world might reopen, Lucy feels it would be unrealistic to assume she’ll be back on her journey for at least 18 months. “Mainly because of the economic impact that this is having on the countries that I’m about to walk through,” she says. “People are in desperate situations and being a foreigner makes me a target.” 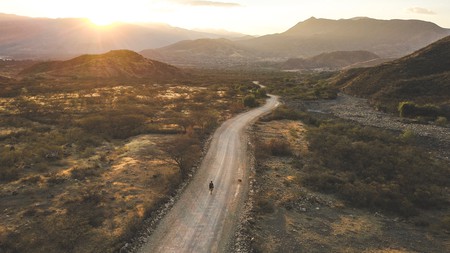 Far from using this time to rest, Lucy is instead focusing on improving her nutrition, keeping up her fitness and increasing awareness about her story. “I have worked hard and I want to be an example to young men and women, to show them that gender should never ever be a leverage for why you should be considered less capable than another candidate in what you’re doing.”