Rampage, the new movie starring Dwayne Johnson, is set to be a creature feature with a difference. We spoke to one of the stars of the film, who appears alongside giant mutated versions of a gorilla, an alligator and even a flying wolf… and yet still comes out as the most evil presence on screen. 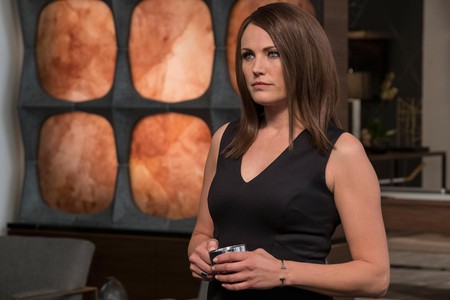 Malin Akerman started career in Canada, where she has lived since the age of two. Her family originally hails from Stockholm, Sweden and she’s still fluent in her mother-tongue.

Following on from a series of supporting roles in a number of films and TV shows, Akerman’s big break came with a starring role in the comedy The Heartbreak Kid (2006) opposite Ben Stiller.

Other notable films include the 2009 comic book adaptation of Watchmen and 27 Dresses (2007). She can also be seen in a recurring role in the hit TV drama Billions with Damien Lewis and Paul Giamatti.

For her latest film, Rampage, Akerman explained to us the appeal of playing the films biggest villain. We also asked about what the attraction is amongst cinemagoers towards Dwayne Johnson, the world’s biggest superstar according to box-office returns.

Rampage is in cinemas now