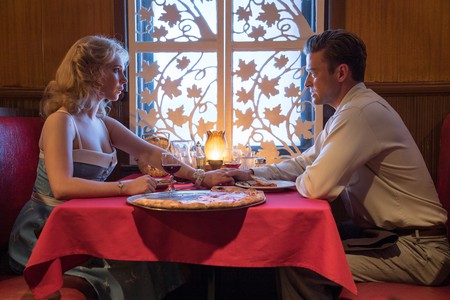 We spoke to the stars of Woody Allen’s latest film, an ode to 1950’s Coney Island in New York, and found out more about working with the famed director.

“Woody is a cinema legend. We both had similar experiences of meeting him.” Justin Timberlake tells us, as we begin our interview with the singer and actor, joined by British star Juno Temple.

The pair are discussing their work on Woody Allen’s Wonder Wheel. “I made a joke and it fell completely flat…” Temple reminisces of her first meeting with the New York native. “It was a complete disaster. I went to his editing suite, and you are pre-warned by his team that it will be a quick meeting. I was ready and I went in and there he was! He said something like “I wanted to see that you were who I thought you would be…” so I joked “What, you thought I was going to be a 6ft 7in man?” and it just went flat. It was a nervous twitch. He did say he had seen my work and offered me the part in the movie and to read the script. At that time, only Kate Winslet was attached and that was enough for me.”

Timberlake, who made his name in the pop band *NSYNC before launching a hugely successful solo career, relived his first impressions of Allen too. “I was in Tennessee at the time and got a call saying Woody Allen wanted to meet in New York. I walked in and he hands me the first two pages, which were just [my character] Mickey talking via a monologue. He said [mimicking Allen] “I, I, I… just wanted you to read it and, you know, say the words out loud.” He was very sweet and after reading it he said “Are you available in September?” and I made sure I was. A few hours later it was pretty much all done, it must have been what it was like in the ‘Golden Era’ in that he sends you the script and asks if you will accept the part. I’ve never had that experience. It speaks to his humility as a writer and director. It’s surreal, doing a monologue of Woody Allen’s words… for Woody Allen.” 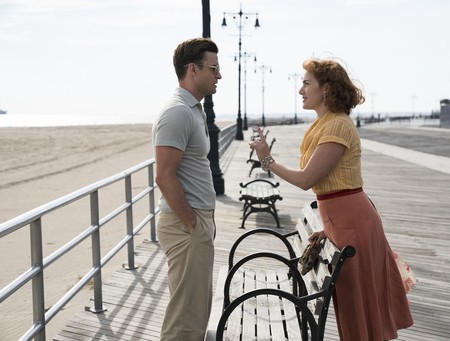 In the movie, Timberlake plays narrator and introduces us to the bustling Coney Island area of New York, a place that the director clearly remembers with fondness. The Sexy Back singer portrays Mickey, a lifeguard, who falls for two women in the form of Ginny (Winslet) and Carolina (Temple). The first thing that strikes you about Mickey is his outfit in the opening monologue.

“I’d rather not talk about the bathing suit… next question.” Timberlake jokes. “It’s funny, you put it on and get dressed in the trailer and with this I thought “I look ridiculous” and then you walk out on set and it makes sense. It felt like a real uniform for that character. It is what they were wearing at the time. It was tight though.”

Temple, who has made a number of critical and commercial hits on both sides of the Atlantic also thinks the set helped with getting into character. “We would not have gone on set until we were through with hair and make up. He never saw us out of character. You would have stuck out in jeans and a T-shirt if you went on that set in regular clothes. They did a good chunk of the Boardwalk each time and it was completely transported back in time. It was the whole strip looking like it was in the 1950s.”

Timberlake highlights how different Allen’s process is from most others he has previously worked with. “Most of the time you are brought on set to rehearse and then go back to get ready. Here it was you walk on set and it is all ready. It changed all of our processes. It did feel magical. We obviously have a script by an amazing director who has inspired so many people, but there was also the lighting by Vittorio Storer [the award-winning cinematographer on Wonder Wheel and a regular Woody Allen collaborator]. It wasn’t a distraction at all and only highlighted the emotions of the characters. He set the tone for everyone in the scene and made it even more electric. It was about recreating Coney Island with light and you probably don’t realise it when filming, but we definitely did afterwards.

According to Timberlake, “It felt like doing a play on location. I say in the monologue about Coney Island and the beach and the 1950s, and I look up and that’s what I see! Everything about the experience keeps you in character. There were no frills but we had a shared excitement and fear about what was going to happen. Woody was very specific about what was working and what wasn’t. When something wouldn’t work he would look at the writing first. The thumbprint is his writing and you can tell he is a musician. There’s a rhythm and dance to it. He would walk on set and say, “Did I write this?”” 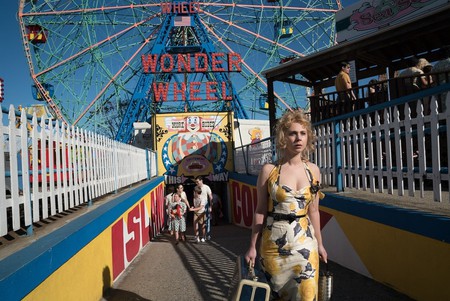 On the technical side of things, just what goes into making a film with the 82-year-old director of the likes of Manhattan and Annie Hall?

“He won’t usually cover a scene, which is why it can feel like a stage production sometimes. The process of coverage in this context refers to the amount of shots used to film a particular scene in a movie. This can be with a combination of medium, long or close-up shots. You sit with just one camera and pan with it. He would tell us, and having Vittorio, who also cares about each character, really helped. We would come onto set and they would tell us what they were thinking. At first it was intimidating but then you do a few takes and feel the freedom.” Timberlake says.

Temple remember one scene in particular, a pivotal moment in the movie. “We had one scene in the car that was Justin and I together and it was the moment where Mickey falls in love with [my character] Carolina. We decided to read one another’s parts, and it really worked to help understand. You can feel the rhythm more. You can feel it in the narration, it’s in the monologues. You can hear the jazz behind you when you say it.”

The two stars have been making films for many years now, but are relative newcomers compared to co-star Winslet. How helpful was it to have an Oscar-winner on this project?

“Kate was our lucky charm! She was incredible. It was an amazing sense of calm that she brings, but also humour. They connect really well. It was everyone on set and it was very giving. She can laugh at herself and that makes it easier for everyone. We were all nervous about the dialogue because its Woody Allen.” Temple says.

It was Timberlake, who has a number of scenes on his own, who explained the way in which Allen creates his trademark scenes. “I did most of the monologues in a few days, but it was all on my own. The camera starts so far away in the opening scene and it comes in but that was all one shot. You can see a tent far off in the distance, and you know Woody is in there watching it all, in his socks and sandals and a bucket hat, and you get “Action!” yelled at you. It was the most nerve-wrecking scene for me because I had to grad through the screen. He says, “That was fine. I can put that in the movie…” which is what he always says if he likes it.” 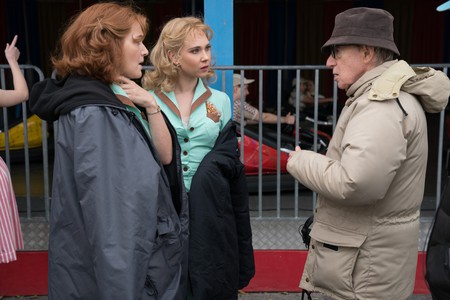 Finally we asked about getting to know the filmmaker and what lasting impressions Timberlake had of the director and the man himself. “I didn’t spend any time with him personally, but you really get to know him as a director. I’m such a huge fan of cinema from the 60s and 70s and I love the way they looked at the world. That’s something that is lost in cinema today. When you get to work with people who are passionate about that era it is wonderful. Seeing Woody Allen get excited about Coney Island too, where he used to go when he was a kid, was great. There was that electricity of the area. Those directors are all fans too and they love films and telling stories about humans. We have aliens and people taking over space and cities that you can’t pay attention to. Woody is great with humans.

I found him to be sweet and charming. The thing that people assume about Woody but that they don’t realise is that he is unassuming. He is just there and really supportive. He is honest, but that’s all you really want. It felt like a wonderful vindication of someone that you can idolise from so far and then get to meet them. You know how they say don’t meet your heroes? Well this was the opposite of that. We would laugh together and he reminded me of my grandfather.”

Wonder Wheel is on general release in the UK from March 9.