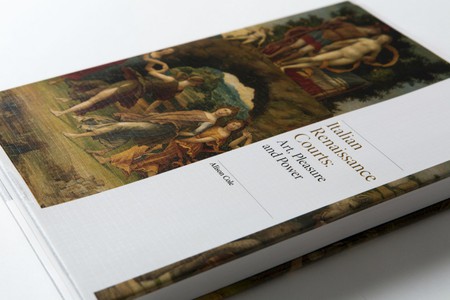 Renaissance art historian Alison Cole has taken a closer look at the artistic patronage bestowed by the five great secular courts of Mantua, Naples, Milan, Ferrara and Urbino. She shows how the princes who ruled these cities would promote their legitimacy and authority by commissioning artists — from Pisanello to Leonardo da Vinci — to design, paint and sculpt a variety of artworks to redesign these cities, and bring to them honour, solace and pleasure. To paint a vivid picture of this era, we bring you Chapter 5 from Cole’s Italian Renaissance Courts: Art, Pleasure and Power. 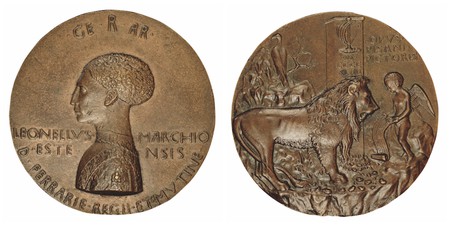 The small principality of Ferrara, ruled by the noble Este family, developed a culture of remarkable vigour and individuality within the span of the fifteenth century. Its idiosyncratic character was shaped by strong cross-currents: aristocratic conservatism mingled with a thirst for novelty and even the bizarre; intellectual elitism flourished amid a practical realism and sense of irony bred in the contado (surrounding countryside). The dynamic tensions produced by these cross-currents expressed themselves in a vivid mixture of competing styles. Thus the Ferrarese poet Boiardo (himself of noble lineage) used the languages of chivalric romance, the classical epic and the Italian novella, among others, to create his irrepressible fantasy of 1484, Orlando Innamorato.

It has often been noted that the literature, music and art produced at the court of Ferrara in this period all share the same poetic, visual and lyrical complexity, even though successive Este rulers had markedly different characters and styles of patronage. This is probably because the ideal of courtly recreation in all its various forms – intellectual, physical, theatrical, musical – lies at the very heart of Este patronage. This vein of pleasure and diversion is expressed in the names of the Este country villas and summer palaces or delizie – places of delight. It was in these frescoed residences – Belriguardo (‘beautiful outlook’), Belfiore (‘beautiful flower’), Belvedere (‘beautiful view’) and Palazzo Schifanoia (‘escape from boredom’) – that the Este lords chose to spend most of their time. Some of these complexes were constructed on a grand scale, with extensive buildings and gardens; others were designed to be more intimate. Dating from the late fourteenth century, they offered the aristocratic pleasures of hunting, music-making, entertaining and study, the rustic pleasures of a rich fertile countryside, and the allure of a Virgilian locus amoenus or biblical Eden. Collectively, they embodied a world of princely privilege and time-honoured rituals, framed by the traditional pursuits of the seasons.

The aristocratic ideals of the Este, drawn from codes of medieval chivalry and heraldry on the one hand, and the moral example set by classical and mythological heroes on the other, are encapsulated in the names that the condottiere-prince Niccolò III (1393–1441) gave his three sons, successive rulers of Ferrara (he sired over 30 children in all). Leonello was named after the lion, heraldic king of the beasts; Borso after Sir Bors, one of the Arthurian knights on the quest for the Holy Grail; Ercole after the Greek hero Hercules. The Este derived their family name from their castle at Este, near Padua, where they had been granted land and titles by the Holy Roman Emperor. From here they expanded their territory to take in Ferrara (an old papal vicariate), Modena, Reggio and Rovigo, as well as the fertile lands of the eastern Po Valley. By the time of Niccolò’s death, Este rule and the nobility of the house were well established. The court poet and dramatist Ariosto (1474–1533) celebrated Este descent from Trojan princes, while Borso traced their ancestry to Charlemagne’s France. In fact, the roots of the Este family tree were firmly planted in Germany. 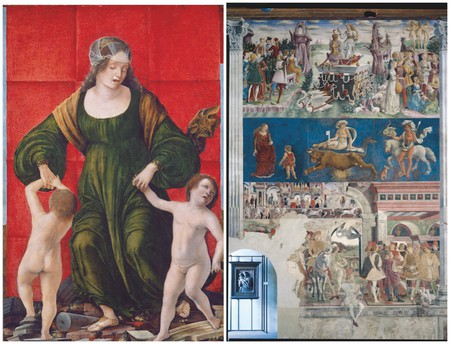 During his brief reign (1441–1450), Leonello d’Este developed a style of patronage based on the ideals of intellectual recreation and connoisseurship. He was scholarly, pious, ardent and compassionate, with a consuming interest in the new humanist learning as well as the visual arts. Ferrara was not a dukedom until Borso’s time, but its aristocratic status was respected. With this in mind, Leonello cultivated an appropriate style of ‘magnificence’ that was directed towards a discriminating and elite audience. His art commissions were governed by strong aesthetic preferences that had an influence beyond the small circle of eminent courtiers with whom he discussed them. These ‘preferences’ are set out in Angelo Decembrio’s imaginary dialogue of 1462, On Literary Polish (De Politia Litteraria), in which Leonello converses with his former teacher, Guarino da Verona, and other prominent literary figures, including the poets Tito Vespasiano Strozzi (a fellow pupil of Guarino) and Feltrino (Boiardo’s grandfather). The conversations are stimulated by a study of engraved gems, and range around ancient coins, sculpture and even Flemish tapestry. From these courtly arts Leonello concludes that the most admirable artistic qualities are lifelikeness and natural variety.

According to Decembrio, Leonello’s asceticism and interest in realistic ‘accuracy’ are expressed through his appreciation of the nude, for the nude is free of all sensual and concealing adornment. In his own dress, we are told, Leonello avoided opulence, though he chose the colours he wore each day according to ‘the positions of the stars and planets’. He also condemned the popular absurdities of ‘tapestries from Transalpine Gaul’, which pander to ‘the extravagance of princes and the stupidity of the crowd’. Leading his life in a decorous and unpretentious fashion, in keeping with a secure sense of his own status, Leonello believed the painter should not ‘go beyond the proper bounds of reality and fiction’, but should try to match the elegant ‘artifice’ of nature.

Decembrio presents these tastes alongside the more fantastic preferences of his companions, which had equal appeal in court circles. Feltrino talks about the painter venturing as freely in his pictures as a poet does in his songs, painting ‘a gelded ram flying with wings’ or a ‘she-goat draped in a woman’s veil’. Recently, Decembrio’s dialogue has been interpreted as a correction rather than a true reflection of Leonello’s tastes, with its didactic observations directed towards his showy brother and successor Borso (to whom it is dedicated). As such, it records some of the fascinating tensions that existed between the humanist ideal of princely virtue, founded on scholarship and contemplation, and the courtly idea of virtue, expressed through material splendour. 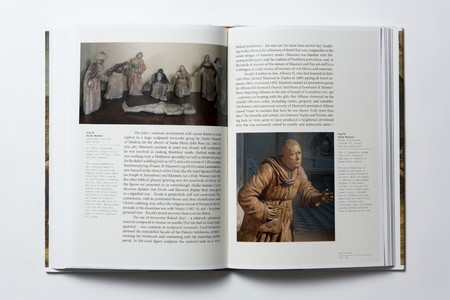