How To Make the Perfect Cup of Tea 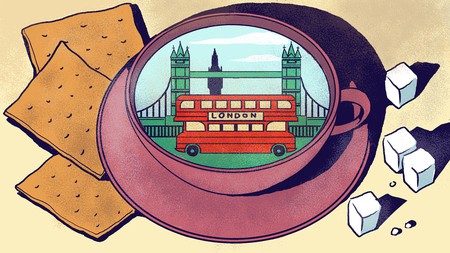 Sipped by royalty, smuggled by criminals and perpetually beloved by all, the cup of tea has been the lifeblood of Britain for centuries. It’s enjoyed morning, noon and night, any time of year and in any mood imaginable. ‘Having a brew’ isn’t just about drinking tea – it’s a way of life. English tea addict Kim Gregory talks us through its history and exactly how she thinks you should make the perfect cuppa.

The British population drinks 165 million cups of tea each day. I, personally, am responsible for around half of those. There’s nothing a good cup of tea can’t solve. Tired? Cuppa. Energised? Cuppa. Traumatised? Cuppa. Celebrating? Cuppa. There’s never a bad time for a brew.

I’d even argue there’s never a good time. There’s just, well, all the time. Whether it’s winter or summer, day or night, wedding or funeral (dark, but true), wrap your hands around a steaming mug and feel yourself melt into the joyous warmth of it all. Tea is truly a cuddle in a cup. A liquid high five. A reward, like your own personal BAFTA.

It isn’t just a beverage, either. In Britain, tea drinking is a way of life. It was even government-rationed during the war, because it’s that important. Nowadays, you won’t walk into someone’s home without instantly being offered a cuppa.

You can’t have a proper gossip with friends unless the brews are flowing. And doing the honour of a ‘tea round’ at your workplace is a ladder to success. I once had a colleague who said: “I don’t like tea. It tastes like mud.” There was a collective gasp, and I don’t think anyone looked at her the same again.

Then there’s the argument of how to make the perfect cup of tea. Every self-respecting Brit knows you cannot bring this up casually. You need several hours, a colour chart, a timer, maybe a podium to speak from and, of course, countless drinking demonstrations for important anecdotal evidence. Asking whether milk goes in first is like questioning Donald Trump on whether he likes America – the answer is obvious and the inference is deeply offensive. And don’t even get us started on the length of brewing time.

Personally, I like to think I’ve nailed how to make the perfect cuppa. It’s taken years of practice and taste tests for which I certainly deserve a medal, and luckily, I’m willing to share my tea-making secrets. As my Yorkshire mother would shout to anyone listening whenever she walks into a building: “Get kettle on, luv!” 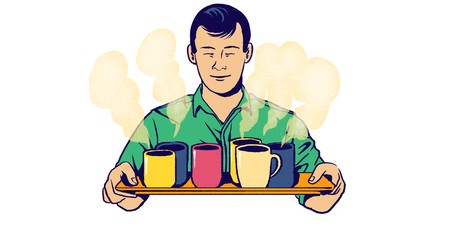 Kim’s instructions on how to make the perfect cuppa

Fill the kettle. But don’t be using old water, oh no! The fresh stuff, straight from the cold tap, is best. As you wait for it to boil, I recommend singing inspirational tea songs like Alice in Wonderland’s ‘Mad Tea Party’ or Lionel Richie’s classic, ‘Is It Tea You’re Looking for?’.

The perfect cuppa is about minimal effort, maximum pleasure, so I’m going with tea bags over loose leaf. There are 1,500 types of tea consumed in Britain, but I recommend Yorkshire Tea for its strength and sweet undertones. Stick that bag in a medium-size mug, preferably with a great slogan, like ‘Drop It Like It’s Hot’. Around two minutes after the kettle has boiled – as overly hot water burns the tea – fill your cup three-quarters full.

Squeeze your tea bag against the side of the cup. We’re here for maximum flavour, not for pleasantries. Discard the tea bag.

Pour in milk and stir. It should be a creamy brown colour – not too dark, not too milky. Then prepare your nerves for the single greatest experience of your life (or day, at least).

Put your feet up, take a sip and let out a long, satisfied sigh knowing that the world is put to rights now that you have yourself the perfect cup of tea. You’re welcome. 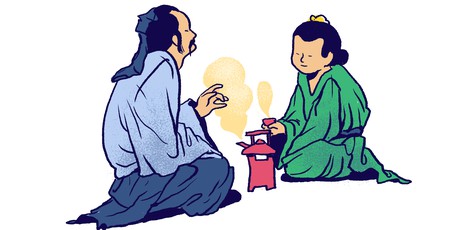 The history of tea

No one knows for sure how tea was invented, but we choose to believe the legend about Chinese emperor Shen Nung. In 2737 BCE, he was sitting under a tree when leaves blew into the hot water he was drinking. He loved herbals, so gave it a try – and never looked back.

Tea became firmly established in history in China’s Tang Dynasty (618-907 CE), then Japanese Buddhist monks studying there took it back to their own country. Thus, it began to spread across the world. When trading grew, it was brought to Europe and first enjoyed by the wealthy Portuguese and Dutch.

Britain got involved when King Charles II married Portuguese princess and tea addict Catherine of Braganza. The beverage became famous as the drink of royalty, so other wealthy men and women joined in. That’s when the East India Company started to import tea to Britain.

Of course, this meant less fortunate people couldn’t afford the tea, especially due to its high tax, which remained for years. The solution? Criminal gangs began smuggling it with brutal but wholly supported methods.

A huge organised tea crime network was established, and smugglers even began to add twigs, poisonous copper carbonate or sheep’s dung to pad out their wares. It was 1784 when the government finally realised the tea tax wasn’t worth the drama, and PM William Pitt cut it drastically, resulting in no more smuggling and tea for all. Hurrah!