How Paddleboarding Created the #PlasticPatrol Campaign

Adventurer Lizzie Carr has launched a nationwide campaign to clean up the UK’s inland waterways, having paddleboarded the length of the country to highlight the issue last year.

In 2016, Carr completed a 643km journey over 22 days, in which she travelled from the most southern point of the UK’s connected waterways. Starting off at the river Wey in Surrey she made her way to Kendal in Cumbria via the likes of Oxford, Stoke on Trent, and Lancashire – purely through paddle power. Following her expedition, #PlasticPatrol was launched this week to help combat the pollution in inland waterways, which makes up 80 percent of marine debris overall.

Adventurism, sport, and environmental campaigning hasn’t always been part of any great plan for Carr. Following a cancer diagnosis in 2013, Carr had what she called ‘an epiphany’ in the hospital about the life she wanted to create, one with nature and adventure at its core – where she felt happiest.

During her recuperation and rehabilitation, Carr saw someone paddleboarding when sitting on the beach near her father’s house on the Isles of Scilly and decided to give it a go. ‘I fell in love with it, I was hooked immediately,’ she said. ‘Being ill, going out on the water gave me total solitude in such a calming, restorative place. After radiotherapy I couldn’t do high-impact exercise, so I ended up trying sports that I probably wouldn’t have ever tried.’

Her health improved, and she threw herself back into work, seeking the routine and stability of the workplace, but gradually, with friends discussing ‘marriage, babies, and Tinder dates’, those feelings shifted as the dust settled on that decision. ‘My feelings in the hospital were so strong, yet I’d ignored them – I’d let myself down and was wasting the second chance I felt I’d been given. So, without much thought I quit my job. I didn’t have a plan – and I still don’t – but cancer gave me the courage to dream big, live with passion, and throw myself into everything with my whole heart. It may sound cliché, but it’s true.’

Since then, Carr has gone about rediscovering herself without feeling restricted by the confines of the life she felt she should have been living. 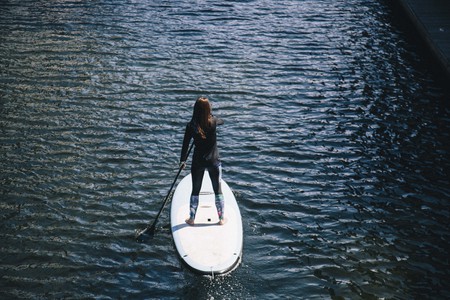 Paddleboarding has remained a constant in Carr’s life ever since seeing it for the first time, with the environmental aspect following as a direct result. ‘I originally had no idea that you could paddleboard in a city, until I went down to Paddington Basin and started along there,’ she said. ‘It’s an extremely charming place but I saw all this plastic and rubbish everywhere. It’s meant to be relaxing but it is blighted by this issue. I went past a coot’s nest on Regent’s Canal and I was horrified. These animals were using man-made rubbish to build their homes. That’s also when I was struck by the amount of plastic choking our waterways. It was disgusting and I just couldn’t paddle past turning a blind eye. I felt compelled to do something about it.’ 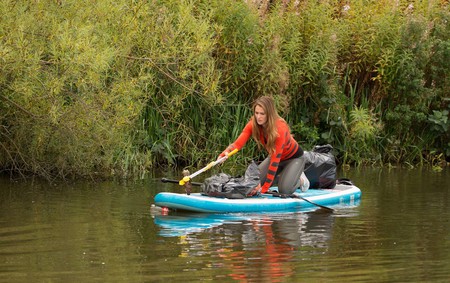 From that point the plan was hatched. The idea was to SUP (Stand Up Paddle) the length of the country and document every piece of rubbish along the way. The issue of plastic pollution is clearly a monumental, global one, but Carr believed that turning the problem into a local one would make people not only more aware, but more likely to act also.

‘I wanted people to care about canals and rivers, and to feel more protective of their local environment,’ she said. ‘There were different layers to the journey. I wanted to challenge myself and take something on, but I also wanted to highlight an issue that was important to me. The response was incredible – people came and helped me along the way, they’d even bring me biscuits, flapjacks, and hot drinks while I was paddling.’ 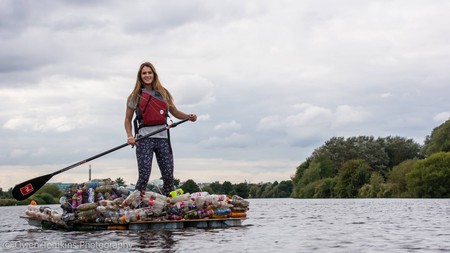 Carr’s sporting life is not simply limited to paddleboarding. There’s also climbing, swimming, running, hiking, cycling, and wakeboarding, and she is currently training for her first ultra marathon. ‘Being outside and trying new things is my main love. Whatever sports fall into that, so be it. Adventurism can sometimes get a bit competitive, with everyone trying to outdo each other, going the furthest or the highest. What I like is being part of nature, rather than conquering it.’

It would be obvious to describe Carr’s cancer diagnosis as a ‘turning point’, but it is clear it has played a significant part in the way she lives her life today. When asked if she would have still quit her career in search for adventure it’s dealt with a great deal of perspective, she said: ‘I don’t know, I hope so, I would probably just have travelled loads. I do feel as negative and difficult as it was, that I am genuinely grateful for it, and it gave me an opportunity to evaluate. The truth is I probably would have been too scared to live this life.’

There are a number of organised cleanups happening over the course of the year as part of the #PlasticPatrol campaign. You can find out how you can help by heading here.