How It’s Hockey’s Women Who Lead the Way

While 83% of sports now pay equal prize money to men and women, no sport matches hockey when it come to its female players raising its profile.

Hockey is something of an anomaly in sport. Whereas gender inequality between men and women’s sports has been widely publicised, hockey remains the one game where men and women enjoy equal pay and profile. In hockey, as with cricket, players’ international schedules take precedent over club commitments but the difference in pay is vast.

England’s centrally contracted cricketers earn a £900,000 retainer fee per year, with match fees added on top of that. Unless they are female, of course, in which case it’s £50,000. It is a similar story in Rugby. The amount England Hockey pays men and women is identical – a figure somewhere between £18,000–£26,000.

This is, in part, because hockey isn’t playing catch up. There isn’t an established male monolith that women must scramble up to achieve an even footing. The sport is given similar levels of exposure and yet, in the UK at least, female players enjoy a higher profile than men with the likes of Helen Richardson-Walsh, Sam Quek and Maddie Hinch garnering more mainstream airtime than their male counterparts.

Success has helped. The women’s GB team won bronze at London 2012, following it up with gold in Rio four years later, propelling them into the public’s consciousness. The men, in comparison, finished 4th in 2012, before failing to get out of their group in 2016.

England’s Hollie Pearne-Webb says: ‘At the moment that’s the case because of the Olympic medals won recently. That’s helped massively. But the men have done well in other tournaments, and if they won a medal at the next Olympics or World Cup, for example, I think their profile would be on a similar level. But I am aware that it is definitely unique compared to other sports.’

This balance between the sexes is felt right the way through to the sport’s grassroots. Hockey is the most gender balanced sport played in this country, with a at 52:48 ratio between women and men. 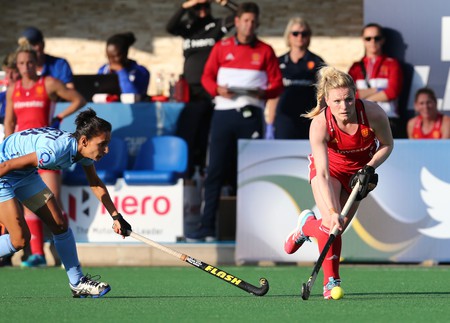 This year the men’s and women’s Hockey World Cups have gone back to being separated, after a joint event four years ago. While the women’s tournament is currently underway in London, the men’s will be held in India in November. That separation gives women’s sport its own platform but has pros and cons.

In cycling, the UK’s most high-profile stage races – the Women’s Tour and the Tour of Britain – are deliberately run at different time of the year to ensure each is enjoyed on its own merit and, like England Hockey, ensure that the women’s game is supported in the same way that the men’s is in every facet, not just financially. This, however, isn’t as straightforward as it appears.

‘It’s a tough one because a women’s race alongside a men’s race does expose existing fans to women’s side of the sport,’ says Lizzie Deignan, winner of the Women’s Tour in 2016. ‘If you already have a stream of fans on the side waiting for a men’s race watching you beforehand, then that also brings benefits. But it’s also good to see us with great TV coverage, racing on the weekend, getting the same exposure – there are positives and negatives.’

For Pearne-Webb, it’s the exposure that is integral. ‘It comes down to equal support. As a sport we’re working on getting more exposure as a whole, and that’s an ongoing process, but the important thing is that the sport is working as one entity with men and women involved rather than a sort of divide-and-conquer approach.’ 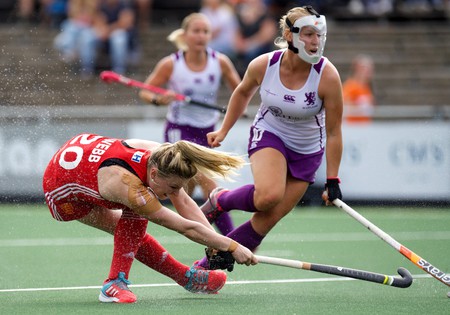 The caveat is, as Pearne-Webb explains that hockey is a minor sport when compared to mainstream alternatives, and has a genuine vested interest in working together as a whole. Football, rugby, cricket, even tennis to some extent, despite the equal prize money at major events like Wimbledon, has a depressing habit of comparing the male and female ‘product’ to one another as a way of justifying the gender-inequality that exists within them.

As hockey’s World Cups play out over the coming months England’s men’s and women’s teams will go into the tournaments as one of the favourites to win, particularly with the women playing on home soil. If the women’s team medals and the their male counterparts don’t it will be intriguing to see whether there comes a point in the near future when the men get left behind and play the part of supporting role. Given Pearne-Webb’s comments about growing as a whole, it seems unlikely, but it would be an unprecedented situation in modern British sport.

But there is historical precedent. Women’s football become extremely popular during and just after the First World War. Central to that success was the Dick, Kerr Ladies team, formed of workers from the factory where they packed explosives into shells. On Boxing Day 1920, a game they played at Goodison Park attracted 53,000 fans. The team also toured France and players such as Lily Parr and Alice Woods became well-known beyond sporting circles.

Its success was such that by December 1921, the Football Association (FA), believing it threatened the men’s game, banned it for nearly 50 years. While teams continued to play in unofficial games, the sport was totally stunted and has been playing catch up ever since.

While it’s extremely unlikely we’ll see men’s hockey banned anytime in the near future, it is certainly the sport’s female players that are currently flying the flag.