With its own annual NFL fixtures, a potential London franchise and an ever-increasing fanbase, the UK is gobbling up as much American football as it can get. Mark Chapman, who anchors the BBC’s highlights show, discusses the sport’s rising popularity.

Poisoned chalice may be a step too far, but in this country American football highlight shows have a history of being passed around like some journeyman striker struggling for goals.

Over the last few decades the rights to show the sport in the UK have hopped between Channel 4, the BBC, Channel 5 and Sky, with no one nailing down a lasting formula. The difference in time zones means that games can be in in the dead of night and schedules clash with British life, although its early incarnation on Channel 4 in the 1980s was relatively successful. 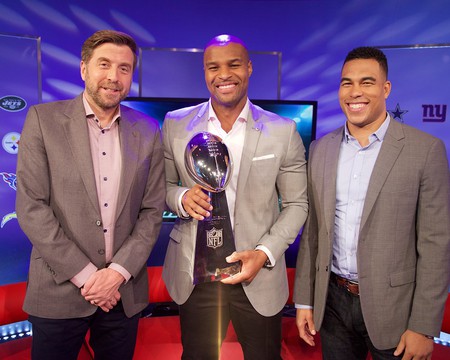 In 2016 its latest incarnation, The NFL Show and NFL This Week, was launched with BBC stalwart Mark Chapman presenting match highlights and post-match interviews. Flanked by former NFL players Osi Umenyiora and Jason Bell, it struck a chord with the viewers and blossomed.

“Thank god I said yes,” says Chapman, who reveals he turned the gig down on a couple of occasions. “As a child I would watch it on a Sunday afternoon. I’d be having tea and having it on on the small TV on the breakfast bar. My dad came back from Chicago in the late 70s after a work trip with a Bears pennant and I thought, “What on earth is that?” Fast-forward to the Bears winning the ’85 Super Bowl and I was a full-blown fan.”

While the sport was in the public’s consciousness, it was never at the forefront, more filed away in a drawer of Americana along with drive-in cinemas, yellow taxis and pancakes for breakfast. And besides, we already had our own football here, with a ‘proper’ ball. But as the world has opened up, Brits are ever hungrier for football with an American flavour.

According to Chapman, three factors have contributed to the show’s success: the sheer amount of openness in American football; the shift to online, which pushed the viewership past the 1 million mark; and “totally fluking out with our pundits; they’re amazing”. In addition, crucially, its popularity is down to the audience it’s targeting.

“I think the first season was very much pitched at the newest fans but I’m a very firm believer that that doesn’t work too well,” Chapman explains. “I always cite Test Match Special [TMS] as my biggest influence. If my family were on a long car journey, TMS has this amazing ability to never patronise me as a cricket fan, and yet be entertaining to everybody in that car. It’s funny and accessible, but still in depth.”

Such a stance does cause an element of friction, but there is a clarity in its intent. A rolling introduction to the sport would ensure they’d lose as many viewers as they gained, with more established fans seeking more refined expertise elsewhere.

Chapman says: “The preview show that we filmed last night has an explainer bit. I don’t have a problem with that – it’s the first show of the season. But I’ve been frustrated on live games that I’ve not been involved in, when they’ve said, ‘This is what a touchdown is’. That is bollocks. There will be diehard NFL nerds who may hate the show, but I do really, really work hard to make sure it’s not basic or patronising.”

Similarly, while the general feel of the show is light-hearted, it’s not a circus act. “As a journalist, there’s a dividing line between doing my job and being a cheerleader. Myself, Osi and Jason were very clear last season when we did the ‘taking the knee’ episode,” Chapman says. “The first part of the show we discussed it properly – no gimmicks, no graphics, no faff. If you can’t be critical then fans will go, ‘What the fuck are you doing?’ We don’t worship at the temple of our clubs, let alone a governing body, so you have to reflect that.”

But the rise in popularity of American football in the UK is not limited to the screen. London has hosted NFL games with sellout crowds for over a decade. Moving a franchise to the UK’s capital is being seriously considered, with the Jacksonville Jaguars considered to be the favourite. Shahid Khan, the franchise’s owner, already owns Fulham FC and tried to buy Wembley Stadium earlier this year. While logistically the move could work, the real issue is gauging whether London’s appetite spans beyond the NFL season.

“A team could work here, with fixtures in blocks, like Toronto in rugby league,” says Chapman. “The hardest part is, how do you sustain that interest when the season is over? In the States there are local radio stations, TV stations, club channels, podcasts, all constantly sending messages, players are around off-season, at the facility. Would London fans invest in the same way when the players all go back home in February?”

Chapman has a theory as to why American football attracts new fans here. “As our football has become more sanitised, people have seeked [sic] that physicality elsewhere. People like huge hits in rugby league, being hit for six, 90mph bowlers. NFL taps in to that part of the human psyche.”

But while the physicality of gameday will always appeal, will the narratives that are integral to American football culture persist when the last play is over? Chapman would love to cover the Draft, the NFL’s annual selection of top college talent that is, according to Chapman, “a mind-boggling eye-opener” and something that is “genuinely fascinating as an un-American idea presented in such an American way.”

It’s on Chapman’s request list for the future. Ideally, the show would follow a player or team through the process, offering more insight to an audience that they’ve grown with.

“I’m never happy with anything. We’ve progressed and proved it works, but I always want it to be better. I want greater access to those involved in the sport, more expertise, more analysis. Oh, and a new studio.”

And why not? The BBC is happy, as is the NFL itself. What’s more, British fans are currently sitting in the diner’s booth ready to order seconds.