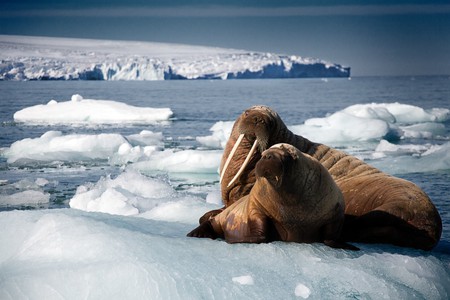 In terms of dream collaborators, Radiohead and Hans Zimmer might not have been a common pairing on many people’s lists, if not simply for the sheer unlikelihood of such an event, but the absence of evidence isn’t the evidence of absence, right?

Thankfully, the production of BBC America’s upcoming natural history series, Planet Earth: Blue Planet II (early 2018), has united these titans of their respective corners of the music industry to produce a song for the documentary’s soundtrack. The result: a reimagined version of “Bloom,” off of Radiohead’s 2011 album The King of Limbs, that switches out its manic instrumentals for sweeping orchestration a la all things Zimmer.

Listen to “(ocean) bloom” below, along with its corresponding trailer for the upcoming series, featuring narration from the legendary Sir David Attenborough, and compare it to a live studio recording of the original track.

As it turns out, “Bloom” was actually inspired by the first Blue Planet series, so it only makes sense that things have now come full circle.

“It sort of seeped into my subconscious,” Radiohead frontman Thom Yorke says in a behind-the-scenes video with bandmate Jonny Greenwood and Zimmer. “I found myself dreaming about these creatures quite a lot. When we came to do all those weird recordings for King of Limbs it must have been in there somewhere. It started with Colin’s [Greenwood] bassline and the lyric ‘Open your mouth wide.'”

After a few brief insights into how they approached writing the reconstructed track, the trio shared their love for Blue Planet II, and the impact they hope it and their song will have on viewers.

“I think what you can do with these images and what you can do in music — I find this time and time again — that you can get under their skin and maybe make them feel about things slightly differently,” Zimmer says. “If this can make you love and appreciate this beautiful world, and maybe remember that we’re supposed to leave it slightly better than how we found it.”

Unsurprisingly, both parties shared glowing reviews of the brief partnership.

“Hans is a prodigious composer who effortlessly straddles several musical genres,” Yorke says, “so it was liberating for us all to work with such a talent and see how he wove the sound of the series and Bloom together.”

On Zimmer’s end: “Bloom appears to have been written ahead of its time as it beautifully reflects the jaw-dropping lifeforms and seascapes viewers are introduced to in Blue Planet II. Working with Thom, Jonny, and the boys has been a wonderful diversion and it’s given me an interesting peek into their musical world. They’ve been incredible to work with and I hope everyone likes the track.”

Let’s hope this isn’t the last time we see Radiohead and Zimmer in the studio together. Check out the behind-the-scenes video below.