Hayley Atwell on Taking 'Winnie the Pooh' to the Big Screen

We speak to the star of Christopher Robin and find out what its like appearing on screen opposite the famous honey-loving bear.

Hayley Atwell is no stranger to the extended Disney family, having starred in a number of Marvel films as Agent Carter and taking the popular character to the small screen for a TV series. 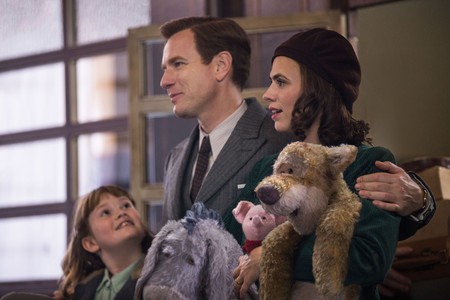 In Christopher Robin, the British actress portrays Evelyn Robin, a loving wife and mother anxious about her husband drifting away from the family. Ewan McGregor portrays the film’s titular character, an older version of the young boy we know from AA Milne’s Winnie the Pooh novels.

As an adult, Christopher has all but forgotten his childhood friends until Pooh is lost in London and the Robin family are confronted by the past.

Atwell tells us about recreating post-war London for the movie, and what it was like acting opposite famous characters from the Winnie the Pooh books.

Disney’s Christopher Robin will be on general release in the UK from 17 August.