11 years after his Turner Prize win, English artist and ceramicist Grayson Perry came back with a new exhibition to follow his own show on Channel 4. We explore the genius behind his textile and ceramics work and take a look at the controversial artist’s personal life and upbringing, including his personified teddy bear and cross-dressing habits. 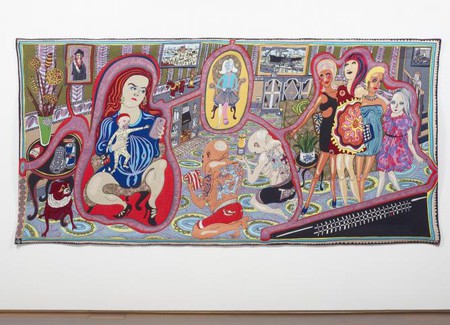 Grayson Perry (2012) | Arts Council Collection, Southbank Centre London and British Council | Gift of the artist and Victoria Miro Gallery with the support of Channel 4 Television, The Art Fund and Sfumato Foundation and additional support from AlixPartners

Typically identified with the two seemingly disparate traits of transvestite identification and brilliantly graphic ceramics, Perry has been the vessel of critique, intrigue and acclaim since his first public exposure with a London-based exhibition of his ceramic work in December 1983. A troubled upbringing with a violent stepfather and estranged mother saw Perry adopt a surrogate father figure in the form of his teddy bear called Alan Measles, also instrumental in the development of his female alter ego (Claire).

These fantasy characters read like a bildungsroman, as Perry’s own pottery and combination of typography and ceramics have become synonymous with a narrative of social transformation. His earliest creative endeavours featured motor aircraft and intricate drawings, which developed into a fascination with the expressive outlet of film while studying at Portsmouth Polytechnic. But the fundamental motives for Perry are to find an artistic platform from which to explore ideas of gender and society – one, which found its most permanent grounding in pottery and tapestry. 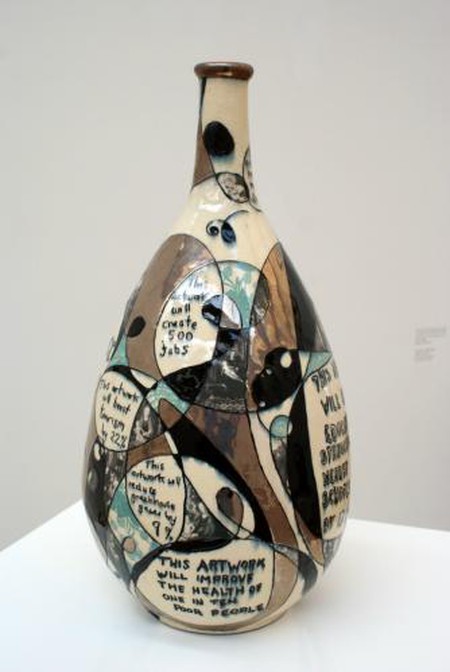 Always a character to divide opinion, Perry splits his own autobiography through his changing faces from the rough stubble-adorned Essex man, to the prom dress-wearing cross-dresser collecting his Turner Prize. Such doubleness and oxymorons also underscore his art. Under the guidance of Sarah Sanderson of the Central Institute, pottery lessons enabled him to start to materially and textually represent his experiences of sexual perversion and unorthodox impulses.

Taking inspiration from the movement of creatures in folkloric legends, their deviant mythologies and the formal aesthetics of Classical Greek ceramic design, Perry’s pots, vases, and urns are brimming with purpose: politically, socially and sexually charged to provoke contemplation and debate. Etched into the surface of these traditional containers, are the stencilled type, sgraffito drawings, and freeform shapes which reveal trajectories of loss, abuse, confusion and disaster. These often chaotic depictions are only discernible at touching distance, as photographic transfers glossing the textural exterior blend into a multi-layered narrative.

This incongruity between form and content is furthered in Perry’s typical use of glorious, punchy glazes, heavily relying on a palette of primary colours, lemon yellow, Yves Saint Laurent blue and bloody crimson. Such import and style are also found in the tapestry and textile work, which follow from Perry’s early ventures into ceramic art. The fundamental shocks and message of Perry’s creative possession carry across these distinct media. Much as historic wall art works such as the Bayeux Tapestry and The Hunt of the Unicorn tapestry series spin out both real and occult tales of their present-day, so too do Perry’s textiles comment on contemporary living in a fabric rendering of satirical cartoon-style stories. 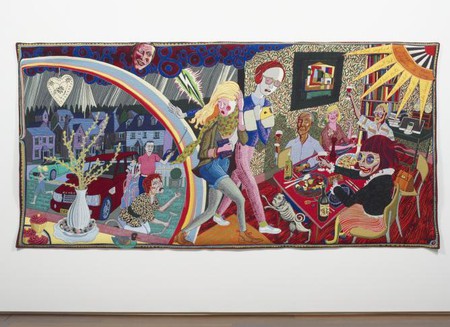 Grayson Perry (2012) | Arts Council Collection, Southbank Centre London and British Council | Gift of the artist and Victoria Miro Gallery with the support of Channel 4 Television, The Art Fund and Sfumato Foundation and additional support from AlixPartners

Both his ceramic and textile works have been celebrated in solo exhibitions globally, from the Stedelijk Museum, Amsterdam (2002) to the 21st Century Museum of Contemporary Art, Kanazawa, Japan (2007) and more recently in a 2012 exhibition at the Victoria Miro Gallery, Mayfair. The latter featured a comprehensive selection of Perry’s mixed media pieces on their web archive and enjoy continuing professional relations with Perry.

Amongst all the criticism, acclaim and fame that he continues to garner, one remark strikes home, calling Perry the “social critic from hell.” It is quite plausible that Grayson would not refute this identifier, as a sometime commentator, spokesperson and wit of our time, who shows that a little bit of hell-raising is probably the order of the day. Especially as this, and his services to contemporary art, were acknowledged with appointment to a CBE in 2013 succeeding a year of monumental celebrations of ‘normal’ and ‘paranormal’ spirit and dynamism in all creative arenas.