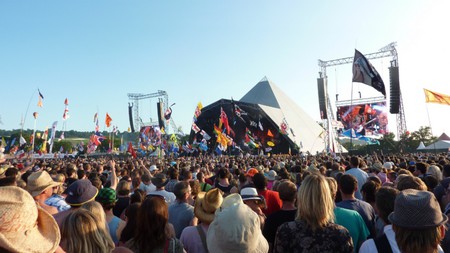 With Muse, Adele, and Coldplay headlining Glastonbury 2016, Britain’s biggest, best, and often bravest festival has played it safely mainstream. For an event steeped in Somerset’s idiosyncratic traditions — druids meet cider — such a swing towards the charts has perhaps alienated some of its hardcore fanbase. Here, we take a tour of Glastonbury’s top 10 headliners throughout history with emphasis on the independent music that has made Glastonbury one of the most famous festivals in the world.

2016 started tragically for fans of culture, art and music with the death of David Bowie. Ziggy truly combined all three of these categories. While his millennium Pyramid Stage performance is etched deep into the festival’s memory, his debut in 1971 gave us a chance to dispel a few drug-induced Glasto myths. Firstly, he was not new on the circuit. In 1971 Bowie released Hunky Dory, now believed to be one of the best albums of all time. Secondly, this was not the first Glastonbury. Ticket prices of a pound for 1970’s first edition actually went down to nothing (compare that to £233 this year). Sadly, the glass of milk from the farm was not included with the free ticket…All is lost in a hippy haze. But one thing is certain, David Bowie will never be forgotten. RIP Ziggy.

While today his daughter, Emily, puts the line up together, Michael Eavis took creative control of the festival in 1981. By 1984 we already saw his more populist sentiments coming through in the choice of the most trendy of bands, The Smiths. Working out whether the indie heroes headlined or not is quite difficult from the few sources available; according to Johnny, technical difficulties marred the last 10 minutes. (Amazingly, the audio survives in the bootleg below.) Ticket prices soared to an almighty £13, showcasing the consequences of capitalism on this quintessential hippy fest. Morrissey and Marr have since returned to the festival as solo acts, but the perennial question of ‘will The Smiths ever reform?’ haunts the festival organisers as much as any music journalist’s interrogations.

Sheffield Steel City has been a major contributor to Glastonbury’s line ups, with Arctic Monkeys also topping the bill twice (2007 & 2013). In 1995, Glastonbury was nearly pulled. The Stone Roses’ split was almost existential for the festival. However, Eavis found an unlikely replacement lurking in the supermarket of Britpop. Pulp were big, having released Britpop bibles Different Class (1995) and His ‘n’ Hers (1994) in the previous two years, but they were still a million miles away from The Stone Roses’ magnitude. The odds were stacked against Cocker and Co. Ignoring this, they smashed it, pulverising the Common People in a Pulp of greatest hits. They stormed the stage with Cocker’s gentlemanly swag and eccentric dancing, winning hearts and minds alike. In 2011, the reunited band went one better with a surprise slot on the Park Stage, ordaining themselves as one of Glastonbury’s most important bands.

After Britpop and before the ‘Cool Britannia’ of Blair’s early years, Radiohead bridged the gap with their quirky blend of U2 infused stadium rock. Well, that was the band then. In the days before Kid A (2000) that took Thom Yorke’s voice to the synthesiser and Jonny Greenwood’s guitar through the amp of distortion, the Abingdon based band offered a more traditional set. Coming just two weeks after the release of their seminal album, Ok Computer, Glastonbury 1997 saw a band at the peak of their musical powers and popular force. While Electioneering and No Surprises were a call to arms after years of Tory disillusionment, they knew how to please and gave the audience the Nirvana-esque grunge classic, Creep. Truly, the band had moved a long way from their original release. In 2016 we await Radiohead’s return, but Glastonbury will have to wait a little while longer with the boys in Barcelona for Primavera Sound.

Disclaimer alert, Björk was not on the Pyramid, but headlined the Other Stage. The Kate Bush of her generation, Björk had come a long way from the 1980s Icelandic band, The Sugarcubes. It had been 13 years since the Ice Queen had appeared at the festival in the aftermath of classic solo release, Debut. For one of the more idiosyncratic performers of her generation, Björk came armed with an all-female orchestra in support, to help her through a back catalogue of hits featuring the likes of Venus as a Boy and drawing heavily on her then-latest album, Homogenic. Dedicating her final song, Declare Independence, to all those waving flags, the tiny songstress may have been difficult to see from the back, but the sheer volume of her set more than made up for that. We might have to wait until 2020 to see her at Glastonbury again, but here’s hoping one of the world’s most influential acts can make it to the Pyramid where she surely belongs.

Back to the boys of Britpop. Nothing grabs the global music conscience like the trials and tribulations of the tortured collaborative genius at the heart of Blur: Damon Albarn (OBE) and Graham Coxon. Albarn headlined again in 2010, making him the only person (or animation) to headline two years running. However, Blur ignited a hungry crowd craving the 90s spirit made flesh. Freshly reunited and at Glastonbury for the first time in a decade, this was Blur at their best. As always, Albarn’s cocky onstage swagger was perfectly balanced with the spiky guitars of Coxon and throbbing bass of Alex James in the background. The britpop brigade showed their force and influence to the fullest. ‘There’s a lot of people here’, Albarn screamed at the start. By the first bar of Girls and Boys you could see why as the audience shouted back every lyric at the band. At one moment, heart wrenching and emotional (End of a Century), the next, silly to the point of self-ridicule (Song 2), from the sublime (Beetlebumb) to the ridiculous (Parklife), they had everything a headliner needs to wipe away the mud of Glastonbury’s fields in teary eyes of pride.

So if Blur were nineties nostalgia, ‘The Boss’ was a 70s and 80s onstage retrospective. Taking to the Badlands of Glastonbury for the first time, the flags and nearly 100,000-strong crowd were basically home for any rocker used to the Wembley Stadiums of the world. Revivalism, resurgence and reunion can often dictate Glastonbury headliners. 2009 was all about those three ‘r’s with Bruce and Blur. Put simply, they had all the hits to feed a crowd. Nearly a decade since reforming the E Street band, everything was set for this set to go down in Glasto folklore. And The Boss did not disappoint. Dancing in the Dark seemed to reverberate around the site with every other band announcing their indebtedness to the boss. From White Lies to The Gaslight Anthem, Bruce was the toast of the tented town. The pyramid was the peak, but check out Bruce’s series of surprise guest slots to truly appreciate what this legend is all about.

Jay Z’s headline set in 2008 was controversial for Glastonbury (and Noel Gallagher), being the first hip hop artist to grace the main slot of the festival. Beyonce’s Pyramid Stage set in 2011 was a continuation of this trend as the organisers set out to expand on the previously successful festival headliners, embracing pop sensibilities and R&B into Glastonbury’s broadchurch. The first female headliner in 25 years, Beyoncé went all out, giving the crowd a hatful of bonafide classics. Hits included opener Crazy In Love, surely designed to win over even the most sceptical members of the audience, and calling on the likes of Single Ladies (Put a Ring On It), the star’s performance was a flawless display of fireworks both onstage and off. With all the fire on the dance floor, perhaps her cover of Sex On Fire was a little too literal. Moreover, at three months pregnant, the choreography showed exactly what women can do on even the biggest stage. Her performance resonated beyond Glastonbury and to a global audience of millions watching on in awe.

It wasn’t until 2013 that the Rolling Stones were finally headlining Glastonbury’s Pyramid Stage realising many a fans’ 40 year fantasy. They blasted the Pyramid all the way to Luxor. Jagger had, well, moves like Jagger, and their treasure trove of archive classics saw 50 years of rock and roll heritage moving onstage at the hands of 70 year old grandfathers. As the crowd jumped like Jack Flash to the opening strums of Keith’ Richards’ guitar, the Stones rocked and rolled like the godfathers of music they truly are. As icon followed icon from their back catalogue, the crowd was even indulged in a rendition of Glastonbury Girl, which Jagger claimed to have written the night before. The stage works during Sympathy for the Devil, as a scrap metal phoenix shot into the skies, was an innovation worthy of the grandest Glastonbury occasion. When a band can end on an encore of You Can’t Always Get What You Want segueing straight into Satisfaction, it is not only the phoenix ascending to the skies, but all of us.

Yes, really…Glastonbury, the most hippy of summer solstice festivals found its broadchurch of inclusion going further than ever with the arrival of Metallica to the Pyramid Stage in 2014. Fans arrived onstage to provide backing vocals during the early songs. If there was going to be a riot in protest, Metallica came prepared with an army of their own. Weirdly, it worked, helping to get even the doubters in the mood for one of the more divisive genres. Fade to Black gained new relevance as this was uncharted territory for both the band and the festival organisers; Metallica playing out into the black of the night to the thousands collected in the field below. A success, but hopefully an exception. Iron Maiden for 2018?