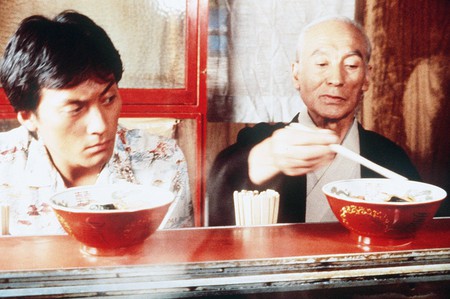 In 1985, a movie was released in Japan that prophesied an entirely different way to look at food. We take a closer look…

As this movie saw it, food wasn’t just something we put in our bodies, it was a means by which we understood and celebrated life. Plates of food suddenly became works of art, worthy of being captured lovingly on camera. Not just a part of life, food was life, a gateway to observing and understanding other cultures. This film understood that the way in which a dish arrived on our dinner table was a journey of many steps, and each step was itself instructional. Meal preparation became a sort of life lesson; your approach to a recipe said something about who you were as a person.

It also predicted how much people would love to eat Japanese noodles in soup. That movie was Juzo Itami’s acclaimed “ramen western”, Tampopo.

Tampopo (the Japanese word for “dandelion” and also the name of the film’s heroine) is an ode to all that is great about a staple of Japanese cuisine that is as popular in its home country as a doner kebab is in the UK. The film is two movies for the price of one; in the primary narrative, a pair of gourmet truck drivers seek refuge one night in a ramen shop run by a kindly single mum. Her noodles are terrible, but Tampopo is a hard worker with a heart of gold.

Aided by her new friends, the epic quest begins to train her into becoming the best ramen chef in Tokyo. Each component of the humble dish, from the broth to the noodles and the barbecued pork, is portrayed as the end result of exhaustive research, empathy and trial-and-error. Itami shoots various foodstuffs using the kind of adoring close-ups that would normally be enjoyed by Jennifer Lawrence.

The main story in Tampopo, which mixes a plucky-underdog tale with comedy, drama and zen philosophy, is a hearty feast all by itself, but where it truly distinguishes itself is through a series of vignettes sprinkled across the film; a hot young couple use food for foreplay; a business meeting takes a comedic turn in a French restaurant; a vacuum cleaner is put to novel use when saving a choking victim. Through all these allegories, Tampopo recognises our modern obsession with food as a multi-faceted experience. We eat not just for sustenance but to help process a kaleidoscope of sensations – arousal, joy, contentment, laughter and even sadness.

Fast forward to the modern day, and food worship is both a full-time hobby and a global industry. Culinary blogs dominate the internet. Instagram feeds are clogged with images of cuisine. Smartphones now hover permanently over dinner tables, their users taking great pains to hold devices just-so in order to get the money shot. Celebrity chefs command a similar status to premier league footballers. Cooking shows on TV are multi-million cash cows for broadcasters. Anthony Bourdain is the new Iggy Pop.

It can all be a bit grating at times. Our frenzied obsession with social media and hashtags means that some people now declare themselves “foodies” purely by virtue of the fact that they enjoy eating different types of food (one could reasonably expect them to label themselves “breathies” because they successful inhale oxygen). It’s very difficult nowadays to find someone who doesn’t want to immortalise their dinner for posterity via their iPhone. The brilliant episode of South Park, “Creme Freche”, depicted foodies as bores and food culture itself as masturbatory.

One way or another, intentionally or otherwise, Tampopo saw all this coming, but where people in the West explore their love of food as a means to express their individuality, Itami’s film contrasts this with a dignified reverence and an earnest need to discover the true soul of Japanese cooking. Interestingly, the film itself doesn’t have it’s own equivalent term for a foodie. All the characters just like to eat. The focus is always on the food. Ego has little say in the matter (when Tampopo and her cohorts locate Tokyo’s greatest living ramen cook, he is happily living on the streets as an anonymous vagrant).

For the Japanese, Tampopo was a success at the box office but wasn’t anything especially revelatory at the time – Asia has had its own intricate, artisinal food culture for aeons (such is the attention to detail that even McDonalds in Japan tastes nicer). But in the West, especially in the mid 1980s, a cosmopolitan, analogous eating experience was something that was difficult to come by. Now it’s everywhere (type ‘food’ into the search bar on Netflix and 40 entries come back in the “Documentaries about Food” category). And ramen in particular has become big business; ultra-slick chain Ippudo, based in Japan, finally opened a branch in London last year after setting up outlets in Australia, Korea, Singapore, Malaysia, China, Taiwan and the USA.

Here in the UK, Japanese food as a prolific way of life seemed unthinkable not too long ago. These days, it’s ubiquitous. The Wasabi chain dominates the high street. Wagamama and Itsu-branded ingredients line the shelves at Sainsburys, do-it-yourself ramen kits are available in Waitrose and you can even pick up Udon noodles at Tesco Express for just over a quid.

Although there are a glut of documentaries and reality TV shows about food in the West, it’s a challenge trying to find a modern-day contemporary to Tampopo. John Favreau’s Chef (2014) comes close, but that film is just as much about the virtues of a simpler life as it is about the perfect Cuban sandwich. Pixar’s Ratatouille (2007) celebrates both cooking and eating, but it’s all-ages appeal means it lacks the edgier, adult tone that Tampopo has. An aforementioned love scene, plus a bit where a live turtle meets a grisly end on camera ensure that it’s definitely not family viewing.

Tampopo isn’t the easiest movie to find (though it’s 100% rating on Rotten Tomatoes indicates a dedicated following) but is well worth tracking down, more so after Criterion released an exquisite restoration last year. It’s an experience that is every bit as comforting as a steaming hot bowl of noodles in soup. Just don’t watch it on an empty stomach.