Fight Like a Girl, Stepping Into the Ring With Female Wrestlers

Pro-Wrestling:EVE describes itself as a ‘feminist-punk-rock’ wrestling promotion, and as our video shows, the star performers are taking their business very seriously.

The previously male-dominated world of professional wrestling is at something of a crossroads at the moment.

Audiences for the standard-bearer WWE brand are down from their heyday of the Attitude Era, a period in the late 90s when the likes of Stone Cold Steve Austin and The Rock dominated mainstream media headlines. You couldn’t move for the iconic eyebrow lifting antics of Dwayne Johnson or the prophetic Austin 3:16 T-shirt adorned by many teenage boys (and girls). 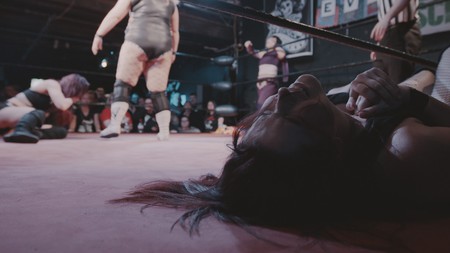 There is, however, one aspect of sports entertainment – the term widely favoured for this type of wrestling – that is seeing something of a resurgence.

Women’s wrestling has unburdened itself of the shackles of the past and it is now female athletes who are excelling. The derogatory term ‘Diva’, once ubiquitous within the industry, has now been outlawed. Part of the ongoing move for women’s wrestling to be taken more seriously by WWE is for the upcoming Royal Rumble pay-per-view, which sees dozens of wrestlers participate in the ring at the same time, to have a women’s edition for the first time.

Earlier this year, GLOW launched on Netflix to much fanfare and proved to be a hit with audiences. The series followed a group of women from a fictionalised wrestling promotion in the 1980s.

The aforementioned Dwayne Johnson has gone on to become one of the biggest film stars in the world, and is now using his own fame and influence to focus on women’s wrestling. The Fast and Furious star is currently producing Fighting with My Family, which tells the true story of Saraya ‘Paige’ Bevis (played by recent BIFA winner Florence Pugh) and her struggle to make it in WWE having started her career in Norwich in the UK. 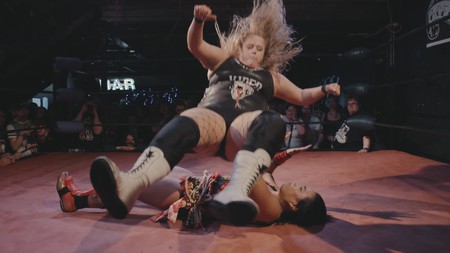 The UK wrestling scene is actually in a healthier state of affairs than its more glamorous American counterparts. EVE is one of a number of promotions that is growing domestically, and since its creation in 2006, founders Emily and Dann Read have overseen a high-impact style of wrestling that has proven popular with audiences.