The New Look: Fashion in a Post-Pandemic World 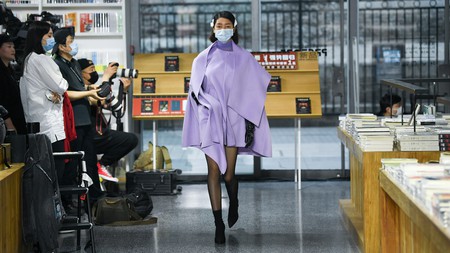 The next 12 months will see virtual catwalks, antiviral material innovation and reformed business models with localised production and fewer collections. Culture Trip speaks to industry-leading trend forecasters and designers at the centre of the fashion world to unpick this new landscape.

This year, fashion editors, buyers and influencers were set to make the biannual trips to New York, London, Milan and Paris – and perhaps on to further international fashion weeks such as Tbilisi and Belgrade. But Covid-19 and lockdown forced the industry to take stock as production ceased and shopfronts shuttered. “There were too many seasons, too many shows and it had become a circus,” says Emily Gordon-Smith, of the fashion-forecasting platform Stylus. Efforts turned to the pandemic, with designers forming emergency networks and leveraging their resources to produce fashion masks and personal protective equipment (PPE) for frontline workers.

As a short-term response, the Council of Fashion Designers of America cancelled all presentations under its official calendar, while the British Fashion Council pressed on digitally – announcing a year-long virtual format, an entirely flexible calendar combining menswear and womenswear, and shows open to all. These London Fashion Week firsts herald an immersion into a virtual fashion future that feels slower and more inclusive. 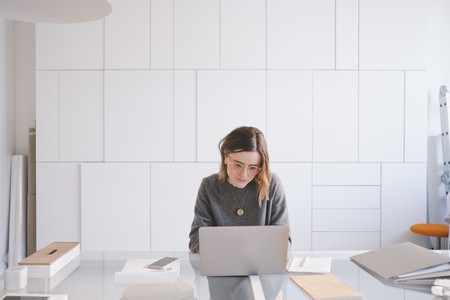 An entrepreneur on her laptop | | © Maskot / Getty Images

An alternative show format is something Gordon-Smith’s team at Stylus have long analysed. “We have questioned the sustainability of flying hundreds of people around the globe for a one-off cruise collection show that lasts 12 minutes,” she says. “But you can’t get away from the fact that buyers and the press need to see and feel products to do their jobs properly – and digital formats do not currently allow for this.”

So what might a middle ground look like? “More of a recalibration and a paring-back to something more sensible and responsible,” she says. “Seasonal monikers are less relevant than ever, so we are likely to see this rulebook torn up.”

Another trend forecasting firm, WGSN, has also been considering what this digital-only move means for the future of fashion weeks. “Many within the fashion industry are seeing this unprecedented shift as a welcome change to a model that has had the same staid format for years,” says senior womenswear strategist Laura Yiannakou. “The leveraging of digital technology to showcase collections has many positives. In many ways it is a more seamless process, but still creative and in a lot of cases, more cost-effective.”

Up-and-coming London designer Katie Ann McGuigan calls showing virtually a “natural transition, with how dependent we are as a society on technology”. September will see her present a capsule collection that has been adapted to work on camera.

Regular London Fashion Week fixture Edward Crutchley, who will also show in September, considers live streaming and digital content the future – at least for the next couple of years. “I can’t imagine a situation where people will want to be in a room full of other people – squashed in shoulder to shoulder – before travelling to another venue, and another and another. It seems so alien to how we have been living,” he says. “I still think there will be a place for shows with audiences, but in a much smaller and specific way.” 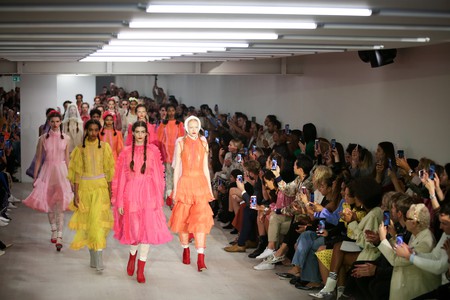 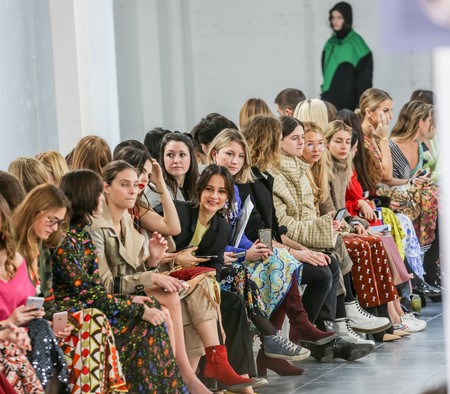 The designer welcomes this “invigorating” shift to digital; it has encouraged much thought about what an audience wants to see. “We’ve had to think about what works best on camera – prints are much larger than they would normally be, so the details are easier to see,” he says. “It’s also been a challenge thinking about silhouettes shot from multiple angles.” 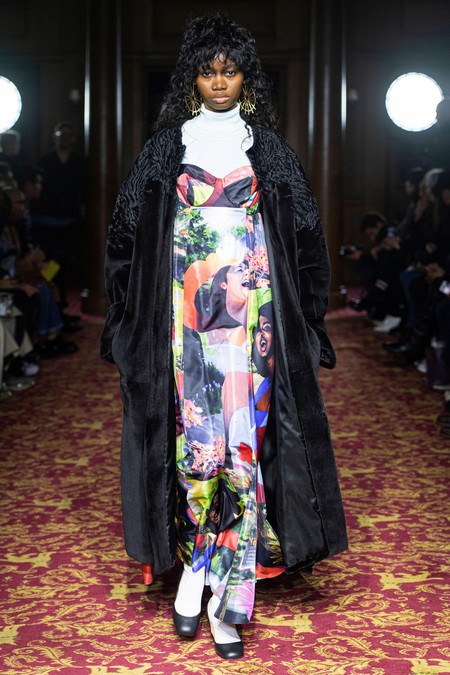 As for the technicalities we can expect to see in upcoming collections, talk of antiviral fabrics has circulated. Vogue Business reported that Albini Group – supplier to companies such as Prada and Armani – has developed a fabric with the ability to destroy coronaviruses. Is this our new normal? “Antiviral fabrics will become central to our everyday living, as our concerns around personal health and hygiene remain heightened. It will become a top priority for consumers, as they look for clothing to reassure, and to shield,” Yiannakou says. “Expect to see an increase in the apparel and active categories, in the form of sanitising and microbe-fighting fabrications that were originally developed for the healthcare sector.”

Dewi Pinaith, senior editor in product design at Stylus, agrees we can anticipate change. “What we’re suddenly dealing with is a consumer that’s very aware of hygiene and less willing to interact with surfaces that others touch – although our future won’t revolve around PVC screens and taped surfaces, like we’re seeing in the initial response to the pandemic.”

Reformed business models are also anticipated in a post-pandemic world. London-based Kitri Studio has announced its shift to pre-ordering, which minimises waste and surplus stock while balancing supply with demand. “It also allows us to gauge customer interest in individual styles and produce to customer demand only,” says founder Haeni Kim. “There is a lot of overproduction in the industry, and now we can think about how to eliminate this waste and run businesses in a financially stable way rather than endlessly chasing growth.” 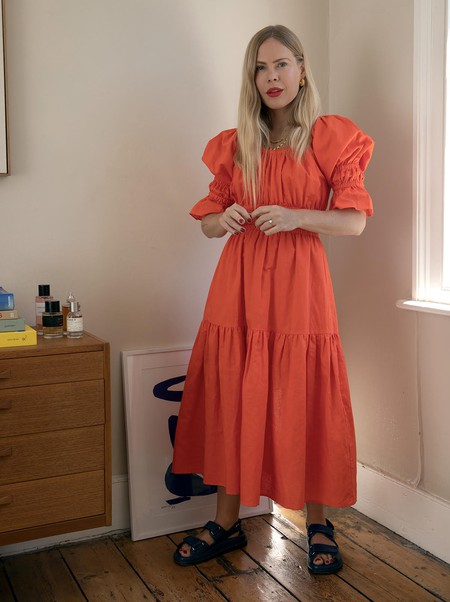 A summer dress designed by Kitri Studio | | Courtesy of KITRI

In Copenhagen, Danish designer Julie Brøgger took the decision to cancel the pre-spring collection. It was “not an easy decision” she says, as for Brøgger, like many other brands, it is the strongest collection commercially. Moving forward, the brand will shift to a three-season model – skipping pre-fall to offer autumn/winter collections at an earlier drop. “All brands have felt the economic effects of this crisis and this will affect how brands will be spending in the future,” she says. 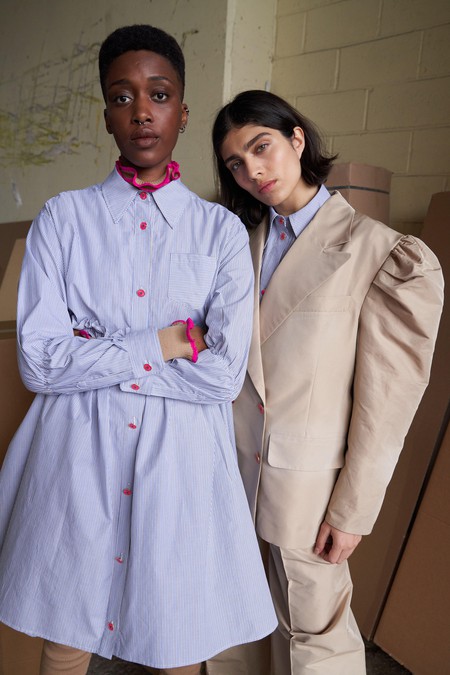 Meanwhile, in terms of production, Pinaith says a local approach is paramount. “At Stylus, we often talk about the need for local production, working with locally abundant materials and minimal stock from a sustainability perspective,” she says. “But the current situation has created a new sense of urgency, revealing the fragility of global supply chains.”

As for the long term, Yiannakou argues the brands that survive will be digital-first and able to respond to consumer needs with agility. “Products will be designed with longevity in mind, and will possess a practical end use,” she says. “We will see these principles enhanced by the increase of businesses investing in 3D technology to speed up the production process, in addition to authentic marketing that resonates with the consumer in an ever-changing market.”