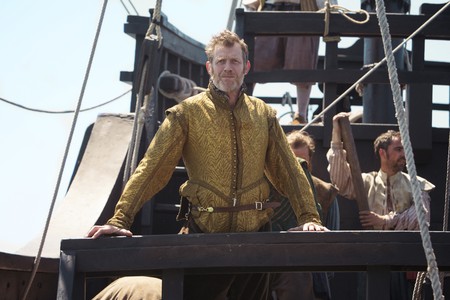 Gripping historical drama Jamestown is out now on DVD and Blu-ray, and Culture Trip caught up with one of the stars, Jason Flemyng, to find out what it was like joining a show with old friends and portraying a less-than-honest man in the old world. 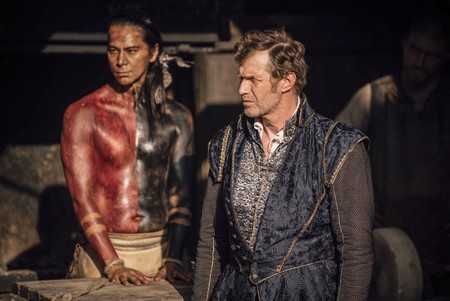 Culture Trip: What drew you to Jamestown?

Jason Flemyng: I thought, ‘I’ll be away from home for a long time, but I’ll be with old friends like Max Beesley and Dean Lennox Kelly.’ I saw the cast list and thought, ‘Mate, this is going to be a joy.’ And I was right – it has been!

CT: What do you love about Bill Gallagher’s scripts?

JF: The language is beautiful. It’s hard graft to learn it, and you can’t make bits up. But it’s absolutely worth it. His writing is very real, but it has a beautiful darkness to it. This is the reality of how it was, a screen version of that. The performers are generally easy on the eye – they’re not starving or covered in lice.

You might also like: Girl Power in the New World as History Comes to Life in Jamestown

CT: How would you characterise the character you play, Yeardley, the Governor?

JF: When he arrived, Jamestown was a military camp and an autocracy. So now he’s trying to turn it into a more democratic society. The gallows stand at the entrance of the town, but he’s attempting to convert it into something more liberal.

CT: Is your character completely honest, then?

JF: No. Unfortunately, he’s as bent as a five-bob note! For him, it’s about coming to Jamestown, making as much money as possible, and then going back to buy an expensive home in London. Making a fortune from tobacco is his plan. His wife was married to the previous governor of Jamestown. She is like one of those football WAGs who only goes for governors. What would you call her? A GAG?!

CT: What drives him?

JF: I found the character of Yeardley the moment I realised that this is the Wild West. It feels like a Western directed by Sergio Leone. It’s as close as I’ve ever been to doing a Western. I’d love to play the Lee Van Cleef character in a remake of The Good, The Bad and The Ugly. I’d definitely be The Bad! 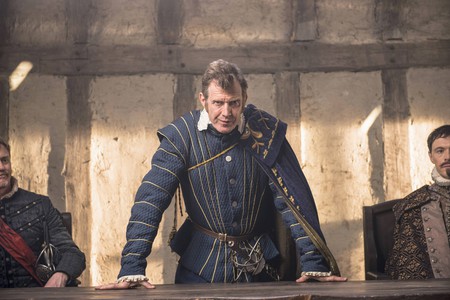 CT: Why did so many people want to emigrate to Jamestown?

JF: The options at home in England were really not great. No one in Jamestown has left behind a two-bedroom house in a nice part of town. They’ve left a world of starvation and degradation to come here and try to find a better life. But people also come here to get lost. I remember once filming in Namibia. You can literally disappear there. Back then, when this series is set, you could just change country and disappear. One of the reasons why most of us don’t commit crimes these days is because we don’t want to get caught. But in those days, you wouldn’t have been caught. You’d just reinvent yourself in Jamestown.

CT: What themes does Jamestown highlight?

JF: The power of love and the possibility of changing your future. The drama also shows just how strong human beings can be when merely existing becomes their sole goal.

CT: What does it add to the drama that it’s told from the women’s perspective?

JF: The three women are quite rightly front and centre. They are the most important characters in the story. That’s great. It’s as it should be. Naomi Battrick is number one on the call sheet and for a very good reason. Jamestown is seen through her eyes. It’s also great to see three female actors placed at the centre of a drama. Sometimes, it’s difficult for women in this industry, so that’s really great. Also, Bill Gallagher writes really well for women.

CT: What do you enjoy most about making period dramas?

JF: I love to learn. I was never that attentive at school. At the age of seven, I wanted to be a movie star – in fact, I still do! Drama can teach you so much about the world that you didn’t know. You have to remove your own morality from the equation. Murder, pillaging and debauchery were commonplace back then. It was a difficult time. But of course, things are different now.

CT: Is this a good arena for drama?

JF: Absolutely. Jamestown is a great setting. If you were to make a template for drama, this has got all the ingredients. Like any great show, it’s got a tavern, a church, a potential for great wealth and a potential for death. So many stories can grow out of this situation.

CT: What impact does the wonderfully constructed set have on the actors?

JF: It has a huge effect on us. You can go from the exteriors into the interiors and have lovely tracking shots. Rather than filming an exterior and then jumping in a car for 40 minutes to a studio, you can do it all in one take. This set was not built for just one series. That’s reassuring for us. We know that they’re trying to go for something long-term, and we’re all up for that.

CT: Do the scripts shy away from depicting the real toughness of life in Jamestown?

JF: No. Bill Gallagher is very uncompromising about that. You feel like you’re right there. The world he creates is immersive. He knew that he had to give this series its own identity. That’s the hook. It’s a very smart idea to give it that identity – so viewers go, ‘Wow, that’s grim!’ It’s like The Revenant, where you can really feel the grimness and the cold and the hunger. That’s compelling to watch, especially from the comfort of your couch. We love to watch other people suffering from the safety of our own sofa! 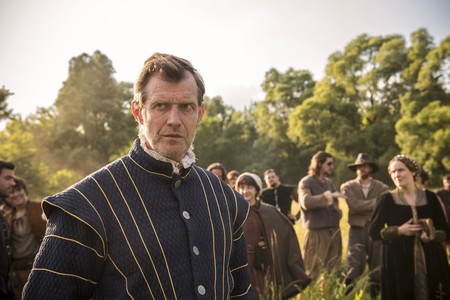 CT: Have you enjoyed working on Jamestown?

JF: Absolutely. It’s like making four films. The time commitment is hard because of your family back home. But, on the flipside, it guarantees my family will have the standard of living which my wife expects [laughs]! And the cast are absolutely lovely. There are no egos here. We went for dinner the other night and every single member of the 19-strong cast came along. You didn’t have that thing of, ‘I’m not sitting next to him’. You didn’t care where you sat. That’s unbelievable. That closeness has never happened to me on a set before. It’s really lovely.

Jamestown season 1 is available on DVD and Blu-ray now.